Documented below are five board games of the past featuring some of the best and most bewildering celebrity endorsements. 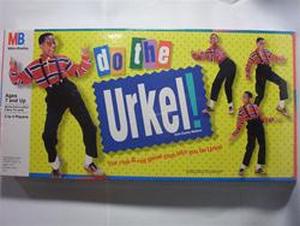 Jaleel White, who shall be known as Urkel until the end of time itself, reached super-stardom by playing America’s favorite nerd: 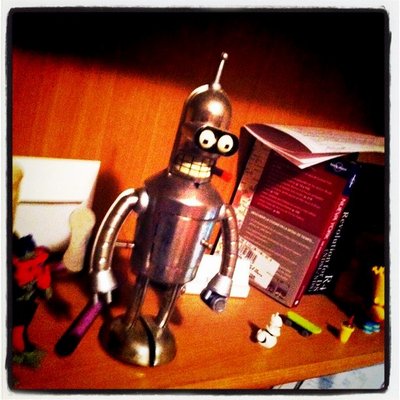 A true inspiration for the children.

Urkel had already become a mainstay character, but his glory was officially cemented through use of the Urkel dance, captured below:

With a break-out dance hit under his non-belt, the next logical step in the development of the Urkel character was to print a mediocre board game based on said dance. 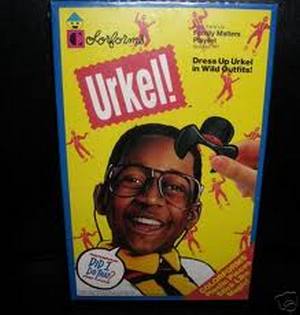 In “Do the Urkel” the player is on a quest to collect the most bowtie cards they can. Their passion for fashion is controlled by their ability to imitate Urkel’s mannerisms, such as pulling their pants up far too high, confirming that they did in fact do that, cheese consumption and making unwanted sexual advances towards the mildly attractive girl next door.

Parents who would then give it to their children and laugh as they make terrible asses out of themselves for inexpensive neckwear. 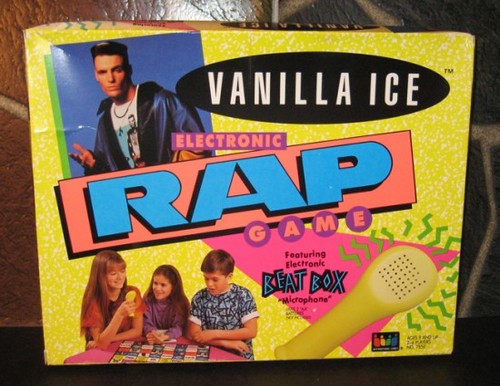 Stop, collaborate, and listen: Ice is back with a brand new invention – of fun! 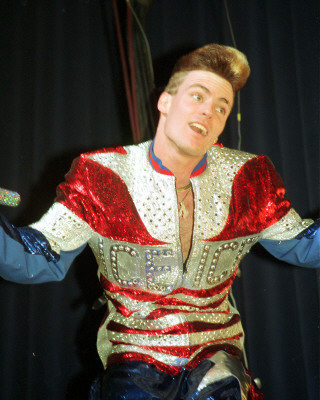 The tremendous abnormality that is Vanilla Ice’s career allowed for some pretty terrible things to happen, the worst being the creation of this board “game.” We include the word game in quotations because it would normally imply a sense of fun and merriment. However, a quick glance over the rules of this game reveals that it’s just a creative writing exercise with a twenty dollar price tag and the added bonus that is the likeness of Vanilla Ice. 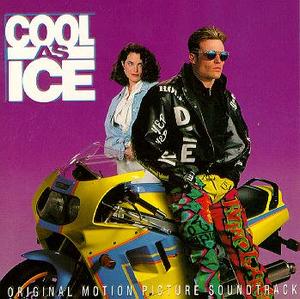 Players collect rhyming cards to complete the “rap” presented on the board, collecting points as they do so. The player who completes the board must then rap the whole thing to a beat presumably lifted from a Queen song. Most of your rhyme cards are nouns, leaving you with what is essentially a really shitty MadLib that will inevitably get heavy rotation on MTV.

Damn near everyone up until the mid-nineties, after which we promptly denied that we had a hard-on for Extremely Live.

Widely accepted as one of the greatest comedians of all time, Rodney Dangerfield made a name for himself by shitting all over said name. His brand of self-deprecating humor and clever word play earned him television appearances and movie roles, not to mention lots of money. Meanwhile, Dane Cook has to tell awkward stories about flipping cashews off of his penis and into his mouth just to get an uncomfortable laugh from a Saturday Night Live audience. I don’t care how many MySpace friends he has. Man’s got nothing on Dangerfield. 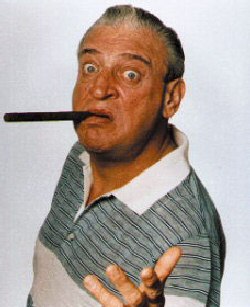 Also, he could rap, so there’s that.

Mr. Dangerfield’s game is that of numbers; players randomly draw numbers from a pile and place them in one of three rows that they control. Every turn, a player must add the next sequential number in their or another player’s row. If playing another players row you can effectively cap that row by playing three of the same number in a row, rendering that row useless and showing a severe lack of respect. The first player to complete three rows wins.

How that relates to Rodney Dangerfield, we do not know. We’re assuming that he was a mathematician and nobody knew it, with all that disrespect and what not.

Honestly, I have no idea. I really can’t think of anyone who would purchase a box simply on the basis that a dead comedian is on the top and the contents within are completely unrelated.