Alcatraz Island in San Francisco Bay was the site of a military prison which housed civil war prisoners as early as 1861, but it is most famous as the site of a Federal Penitentiary which operated between 1934 and 1963, housed famous prisoners such as Robert Stroud; ‘The Birdman of Alcatraz’, Al Capone and George ‘Machine Gun’ Kelly, and inspired movies such as ‘The Rock’.

The terrible reputation of the island-fortress rests on the fact that escape was near impossible. However, one chink in the seemingly impenetrable armor of the Alcatraz legend is the escape attempt of June 11th 1962 which inspired the Clint Eastwood film ‘Escape from Alcatraz’. On this day, convict brothers John and Clarence Anglin and co-conspirator Frank Morris broke free via an elaborate plot which involved false air vents, a route through the bowels of the prison, a rooftop scramble, a descent via drain pipes and escape on improvised rafts. The trio even used realistic dummy heads placed in the beds of their cells to avoid detection. Oars from their vessel and personal effects were eventually found; as was a body in prison uniform which had deteriorated too badly to be identified. However, none of the escapees were ever found. The official view is that the men met a watery death in San Francisco Bay, but there have been several unconfirmed sightings over the years and their friends and families claim to have received several hand-written postcards over the years. Their files remain open until the 100th birthdays of all three./p>

Life inside the prison was a tough. Early Alcatraz prisoners didn’t wear the stereotypical black and white stripy outfits popularized by Hollywood. Initially they wore wool trousers and overalls to work but their uniform changed later on to blue denim trousers, a rough cotton shirt, a cotton jacket, overcoat, wooden cap and raincoat; which would be donned for outdoor work details by the docks with teasing views of the mainland San Francisco shore. On July 31st 1945 one such prisoner working on the docks, John Giles, attempted an inspired escape by wearing a pieced together U.S. Army uniform and boarding an apparently mainland-bound boat, the ‘Incognito’. Unfortunately for Giles, the boat was actually bound for nearby Angel Island, where he was recaptured by officers and returned to his rocky abode. Giles deserves kudos for ingenuity, but what follows are five notorious escape attempts from Alcatraz that made headlines around the world:

Convict Joe Bowers had worked burning prison waste in an incinerator close to the shoreline for some time. On this day he must have found the close proximity of the mainland too tempting to resist. In a moment of desperation, he began to climb over the chain fence at the edge of the shore but was shot by a guard tower officer and fell 50-100 feet to the ragged shore below, later dying of his terrible injuries. 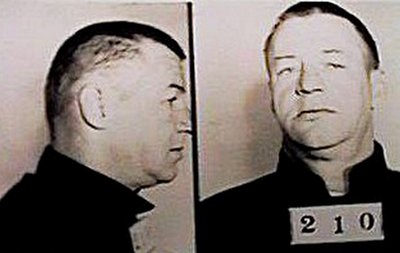 Ralph Roe and Theodore Cole had patiently spent some time inconspicuously filing through the iron bars of a window in the mat shop of the model industries building. During the night they made their way through said window, scrambled to the shore and into the murky waters of San Francisco Bay. Roe and Cole clearly picked the wrong evening for their escape bid as a heavy storm churned the waters of the bay into a menacing maelstrom and the official view is that they were swept out to sea never to be seen again. 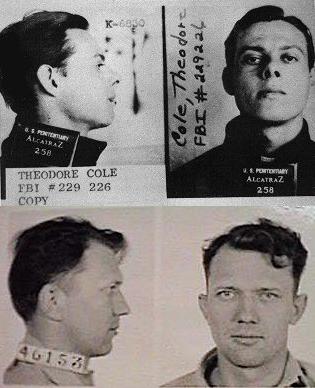 January 13th 1939: William Martin, Rufus McCain, Henry Young, Dale Stamphill and Arthur ‘Doc’ Barker; son of Ma Barker and member of the infamous Barker-Karpis gang, sawed their way through the cellbars of the cell-house isolation unit and made their way to the shore. They were met by a posse of correctional officers and all surrendered, except Stamphill and Barker; who were promptly shot, with Barker dying of his injuries. 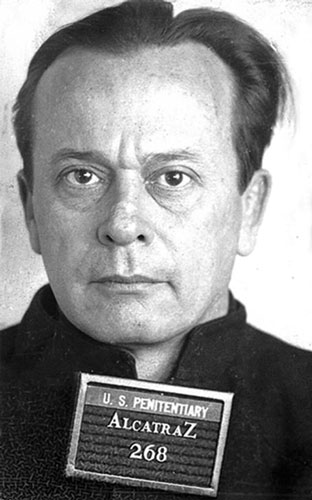 This attempted escape saga became known as the ‘Battle of Alcatraz’ [of which a great book was published on this subject in 2001] and began when prisoners Marvin Hubbard, Sam Shockley, Clarence Carnes, Miran Thompson, Joe Cretzer and Bernard Coy overcame cell-house officers, helped themselves to weapons from the armory, found the cell-house keys and took control of the section. However, the crucial key was missing… the one that unlocked the door of the recreation yard. Rather than surrendering, the six decided to shoot it out with authorities over the next few days and attempted another two escapes, killing 2 correctional officers and injuring a further 18; with the result that the U.S. Marine Corps was called out to assist and the escape ended with the deaths of Coy, Hubbard and Cretzer. Carnes, just 19 years old at the time of the incident, was given a second life sentence for the deaths of the officers. 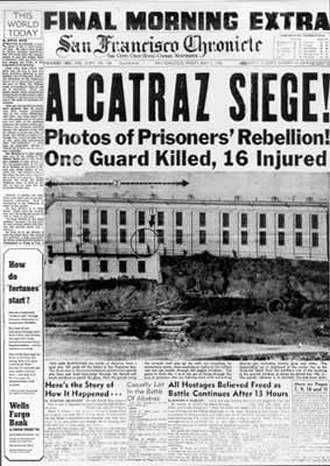 Convicts Clyde Johnson and Aaron Burgett were working on the prison garbage detail close to the shoreline when they overpowered their supervising officer and took to the water to swim towards San Francisco and freedom. Jonson was apprehended by authorities in the water but Burgett could not be located, despite the best efforts of authorities during a long search mission. His dead body was found floating in San Francisco Bay two weeks after the escape attempt. 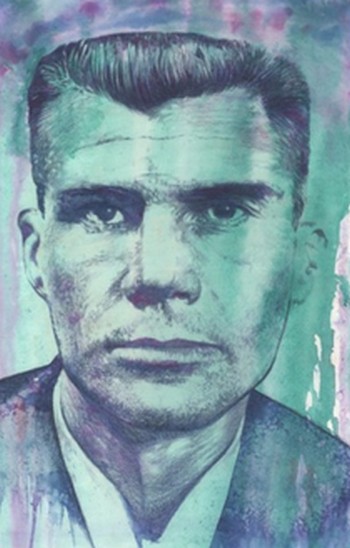