It’s fair to say that in the digital age we’re beaten over the head with advertising on a regular basis. With constant exposure to commercials, banner ads, and other spots trying to catch your eye, it’s likely that many go unnoticed.

But when you manage a misstep in a world where everyone is connected, you’ll earn yourself more attention than you planned on—most of it negative.

2015 saw a new campaign for Bud Light. On social media, this focused on the hashtag ‘UpForWhatever,’ which ran into some problems itself earlier in the year. Then came this label, which made matters much, much worse.

The aim of the slogan seems to be that Bud Light is the beer of choice for losing your inhibitions and letting shenanigans ensue. However, it didn’t take long for people to read into much darker implications, claiming that the two taglines on the label (the second, on the bottom, reads “The Perfect Beer for Whatever Happens”) promote rape culture.

Social media was quick to tear the slogans apart, as did newspaper columnists and television pundits, and soon the company put the brakes on the label. It’s strange to think that in this day in age, with so many advertising faux pas behind us, such a glaring oversight could occur without someone thinking “Hey, this could be taken really badly.”

Confusing matters further, The Wall Street Journal reported that the wording of the label went through “at least five layers of approval” before the label was finalized. Yikes. 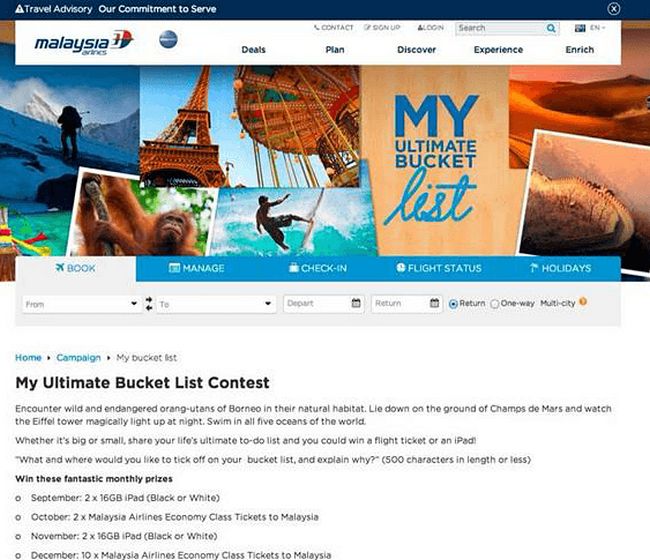 Malaysia airlines were having a rough go of things in 2014. First, they made headlines in March when flight MH370 vanished without a trace (at the time of this writing neither the plane nor anyone onboard has been found). Then, in July, flight MH17 was shot down when flying over armed combat in Shakhtarsk Raion, leaving no survivors.

To generate some positive buzz the airliner launched a contest in September. Open only to customers in Australia and New Zealand, the contest called for five-hundred-word essays describing which places and activities they wanted to cross off their bucket list.

Entrants could win a free economy-class ticket and an iPad. Right out the gate, the contest was criticized for its poor title. Asking your customers what they want to do before they die when you’ve lost two flights carrying five-hundred people seems like a bad joke.

According to a statement released by the company, the contest name was simply playing off a common phrase and had been approved earlier based on that. They obviously weren’t trying to upset or enrage the public (that tends not to be a good way to increase business), but somehow the contest went forward despite the tragedies earlier that year. The title was quickly scrapped and the contest renamed “Win an iPad or Malaysia Airlines flight to Malaysia.”

Any ad campaign utilizing a specific hashtag is taking a gamble. The nature of hashtags on Twitter and social media will allow anyone to say anything and link it to any and every other discussion using the hashtag.

If people choose to use your hashtag against you, you’re nearly powerless to turn the tide and salvage the campaign. The original hope was that people would be sharing positive experiences they had at the company’s restaurants, be they about food, friends, employment, or something else. And while that may have been the case early on, detractors were quick to share their grievances with the company’s practices and products, turning it into an absolute PR nightmare.

McDonald’s made matters worse for themselves by getting the hashtag promoted on Twitter’s front page. It was pulled a few hours later but the trend continued. You can search Twitter for the hashtag itself, and there are a few articles collecting the best (or worst, depending on your perspective) McDStories. It’s an important lesson for a company to learn: if you encourage people to speak their opinions on a massive platform like the internet, you can’t and shouldn’t expect a certain outcome.

Drugstore chain Walgreens played their hand at social media advertising in early 2012 (under a very different set of circumstances), with the same results.

The world of fashion is well known for making advertising blunders. In 2011 Italian Vogue described circular and hoop earnings as “slave earrings.” Here’s Levi’s Jeans advertising that “hotness comes in all shapes and sizes” by utilizing three models of one shape and size.

In 2014 Victoria’s Secret began promoting a line of bras in the UK via online and in-store advertisements. Almost immediately the ads were attacked for the same reasons as Levi’s ad linked above. Social media discussions were critical of the slogan, and a change.org petition reached over 30,000 signatures asking Victoria’s Secret to apologize and pull the ads. At least one other company made a parody ad utilizing models of varying shapes and sizes.

This was sort of a victory for the opposition in that the online ads were changed to read “A Body For Every Body.” However, the image itself remains unchanged, which would suggest that maybe Victoria’s Secret missed the point entirely. Many of the controversies surrounding the company revolve around their choice in models. At some point, you would expect they’d pick up on that.

1Reebok – ”Cheat on Your Girlfriend, Not on Your Workout”

In the digital age, your ad doesn’t have to be global to spark outrage around the world. The above ad was only posted in gyms that Reebok had partnered within Germany, and presumably, that’s as far as the company thought they would reach.

All it took was some photos, some tweets, and soon the world knew that a company was suggesting that your brand of the shoe was more important than being faithful. “It’s obviously a joke,” you say, and sure, that’s true. But it’s arguably in poor taste and as each previous entry in this article proves, the digital age allows us to more directly (and more easily) express our anger and disgust. The story made news in and outside of Germany.

At one point the website cheaterville.com, a site dedicated to exposing cheaters, weighed-in with their opinion and threatened a boycott. Reebok was fast to apologize, pulling down the ads and saying the company was “disappointed that they appeared at all.” The ads were up for a grand total of two weeks.