When most people get a car, they basically just want a few things out of it. First, they want it to actually, you know, function. There’s not much point in owning a car if it doesn’t actually run, is there? Along with that, most people are hoping they can get a car that looks cool. People love Ferraris, Porsches, Corvettes and so forth. What most people probably do not want, however, is an absolutely ridiculous looking car. You know, like the dog car from Dumb and Dumber. But there’s no way anyone would actually own or drive something like that in real life, is there? Come on, you’re smarter than that. Of course there are. Here are some of the most absurd looking cars in the world.

If you’re thinking of wooden cars, you’re probably thinking along the lines of a soap box derby, right? After all, no one in his right mind would build a car made entirely of wood. That’s just a ridiculous concept, right? Well, don’t tell that to Livio Di Marchi, who has gained some global fame for constructing wooden cars. In case you couldn’t tell from his name, Livio Di Marchi is Italian. Specifically, he is from Venice. You know what they have in Venice? Canals. There’s not a lot of use for a car in a city that’s mostly water, right?

Well, the beauty of Di Marchi’s car is that wood floats. So what he has built is an honest to god car/boat hybrid. When we say this thing is made of wood, by the way, we mean it’s entirely made of wood. He built his car to look like a Ferrari F50, so he’s got the “cool” part down, at least. Di Marchi doesn’t just limit his woodworking to his floating car, either. Do a quick Google search and just look at all of the ridiculous stuff this guy makes from wood. Some people need to get a hobby, but in Di Marchi’s case, maybe he should ease up just a little. 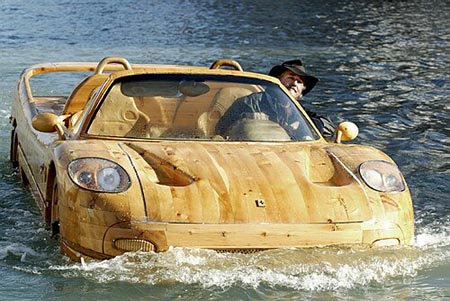 Do you remember the old nursery rhyme about the old lady who lived in a shoe? Well, she had to get around somehow, right? You’d imagine when she finally got a babysitter she liked to go out for a night on the town. So how would she get around? Well, we have to imagine in a vehicle that looks an awful lot like this. Yes, there is an actual high heeled shoe car, for some bizarre reason. Why would someone drive a car like this? Lord only knows, because we sure as heck don’t.

Technically, this is more of a tricycle than an actual car, but we’re putting it in here anyway because it’s got a steering wheel, and the anonymous expert we just asked (trust us, he’s got great credentials) has assured us that’s all you need to be a car. This guy would know, too, because he’s a doctor of science, or something. And he agrees that the person who would build and then proceed to drive around in a high heeled shoe car is probably too crazy to argue with, so just smile and nod politely when he or she drives on by. 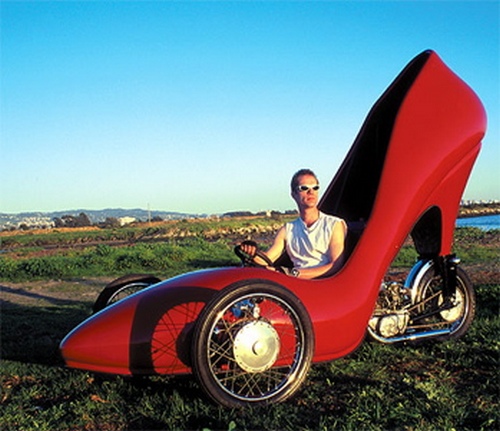 If you were not aware, Star Wars is a very popular film franchise which, to the best of our knowledge, consisted of just three films and then a bunch of merchandising, including three two hour long toy commercials that came out around the turn of the century. Anyway, people take Star Wars far too seriously, but that’s okay, because no one is crazy enough to go beyond dressing as Han at a convention or collecting the action figures and writing fan fiction, right? It’s not like anyone would try to construct their own version of a Star Wars vehicle, especially not a relatively obscure vehicle that makes exactly one appearance early in the first movie.

As it happens, that’s exactly what someone did in constructing the Sand-Crawler car, which is modeled after the Sand-Crawler that the Jawas use to tool around the desert, abducting stray droids and selling them into servitude. Man, we really have to hope that’s not what the guy who owns this car does, but we wouldn’t put it past whoever’s nuts enough to build this beast of a car. 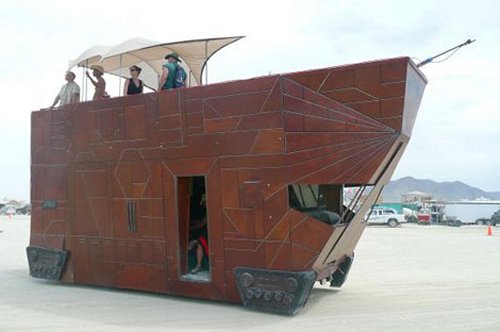 Well you knew that after mentioning Dumb and Dumber up there in the introduction we had to have at least one animal themed car, right? What kind of a list of weird cars would this be if we did not feature at least one automobile covered in fur for some bizarre reason? And so, we bring you the Mouse Car, which is pretty much exactly what it sounds like, except it’s not a real mouse, of course, and it’s also not a car driven by a mouse. Although that would be pretty cool, wouldn’t it?

Anyway, the Mouse Car features fur and some big old ears on top, and was built out of an old Volkswagon Beetle. We can’t imagine those ears are particularly good for helping the car reduce drag and improve the aerodynamic aspect of the design, but a Mouse Car without ears would just be silly. 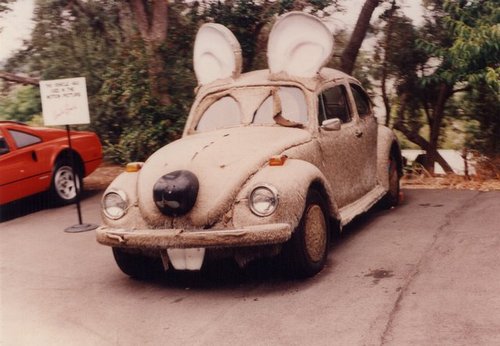 Come on, did you really think we could pass up the opportunity to have a Cat Car chase a Mouse Car on our list? If you did, then clearly you don’t know us very well. Anyway, where the Mouse Car features fur on the outside, the Cat Car eschews that idea and replaces it with just being really kind of creepy. Built to look like a cat getting ready to pounce, the Cat Car features a tail, paws, and lifeless, disturbing eyes.

We aren’t very sure why they didn’t just make the headlights into the eyes, but it probably has something to do with the fact that headlights don’t offer the capability to steal your soul the way those horrible, horrible cat eyes can. The best course of action if you see the Cat Car coming down the street is to just pull over to the side of the road and hope they don’t see you. Or, hey, you could always go borrow Harry and Lloyd’s Dog Car to chase it away. Yep, ending on another Dumb and Dumber reference. We’re just good like that. 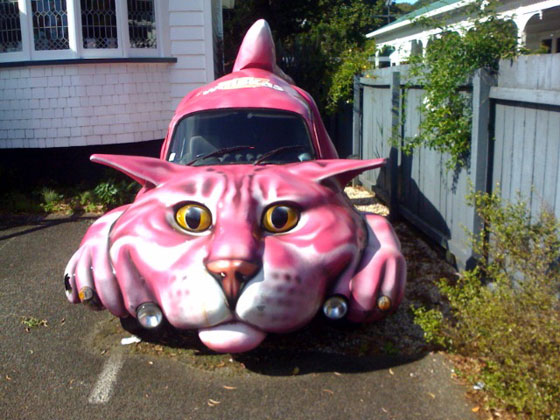