Ah the 1980’s. Some of our readers may only know of this strange and awful haircut-filled era through numerous VH1 specials. And we really do mean numerous. Last we checked, their next show was going to be called “I Loved the 80’s: Volume 43 – June 12, 1982, 7am to 7pm Edition”. Without a doubt, the 1980’s was a semi-memorable decade filled with countless historic milestones and major world changing events… none of which will be remotely discussed here. Instead we’ll be taking a look back at some of the weird things which kids in the 80’s inexplicably loved with all their hearts. 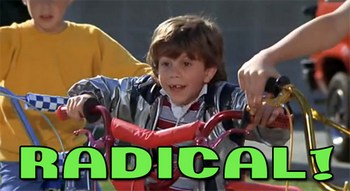 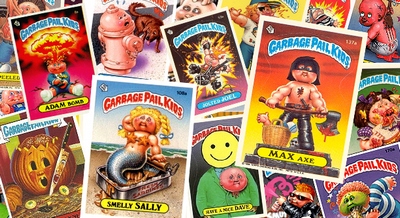 It’s pretty obvious kids today think they’re all that – what with their twittering, their terabytes and their holo-laser hula-hoops (patent pending). But 80’s kids had something special…they had the original 1985 Topps Garbage Pail Kids trading cards. Trading cards were like collectable card games, except you could only look at them, not play any games. Initially, Garbage Pail Kids were simply designed as a spoof of the slightly creepier Cabbage Patch Kids dolls which we’ll get to another time. Each sticker card featured different characters with comically hideous abnormalities. Each character was also given a cheesy name which was often a play on words such as Adam Bomb, Cole GATE or Up CHUCK. (Ha! Get it?) Sometimes the characters were just given nonsensical names which simply happened to rhyme and / or fit their appearance such as Glandular Angela. 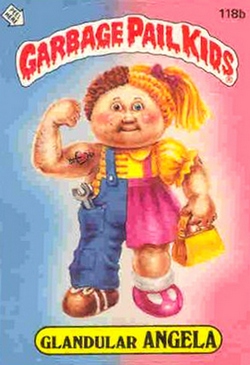 In today’s PC friendly world this card would just be called “Non-existent”.

The bizarre card series caused a bit of an uproar back in the day. Whiny parents just didn’t get the appeal and schools actually went as far as to ban the cards, apparently fearing they contained witch recipes. Ironically the controversy likely led to their increase in popularity as kids love pissing off their parents and teachers with inconsequential crap. The actual art featured on many of the cards was fairly impressive. The series was created by Art Spiegelman and Mark Newgarden and each card was illustrated by John Pound, Tom Bunk, Carole Sobocinski, Javi Soler and other talented folks. In fact, many of the unique images were quite museum worthy – at least in our humble view. 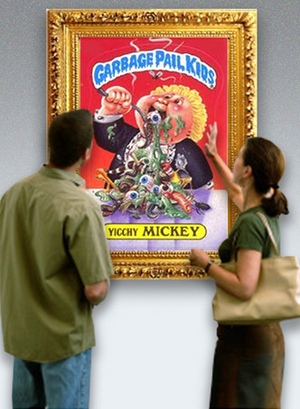 “…Oh I agree, the contrasting colors and magnificent line work underpins the splendor of the subject’s vomit.”

The Garbage Pail Kids were the most oddly hyped international non-sport card craze to ever hit consumers. The series commercial success was so huge, in fact, that Hollywood caught a whiff and quickly tried to cash in with the 1987 live-action abomination known as The Garbage Pail Kids Movie… 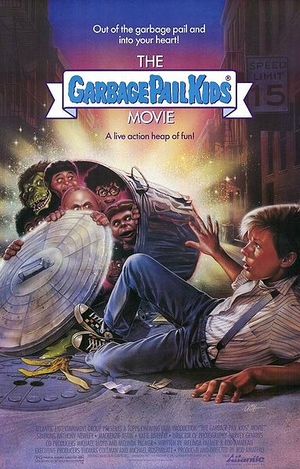 Currently showing on Netflix Watch Now! But don’t all run away at once to see it. 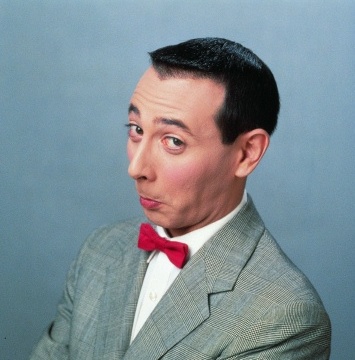 The origins of the quirky man-child Pee-wee Herman can be traced as far back as the 1970’s when Paul Reubens (Pee-wee) and his friend, comic legend Phil Hartman, were doing their rounds on the L.A. comedy circuit. Reubens, Hartman and their comic pals were an improvisational comedy team known as The Groundlings. Pee-Wee’s first big break though, was on his very own (surprisingly edgy) HBO comedy special The Pee-wee Herman Show which aired way back in 1981. Later a more toned down Pee-wee hit it big with Tim Burton’s 1985 classic flick, Pee-Wee’s Big Adventure. Finally, and for some most famously, there was the 1986 Saturday morning live-action show Pee-wee’s Playhouse. This was a show obviously 100% catered for the kiddies.

Whew, that sure was a mouthful of history…HuH-HuH!

For five seasons Pee-wee’s Playhouse rocked kids (and even adults) Saturday mornings. It truly was an insane show which, for the record, won an impressive 22 Emmy awards. On the surface the series was designed as offbeat educational kids fare, however it was obviously much more. The show had it all and then some. Clay animation, vintage cartoons, a robot, a floating genie head, a pterodactyl, talking chairs, a talking floor, a talking map, a talking globe, a talking chandelier, a talking cow, three talking flowers… you get the point, pretty much everything talked. 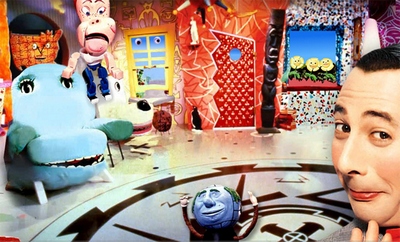 Who wouldn’t want to live here?

The series was clearly influenced by the 1950s kid shows which Reubens grew up on such as The Mickey Mouse Club, Captain Kangaroo and Howdy Doody. It’s also notable for featuring Laurence Fishburne of Matrix fame as Cowboy Curtis. 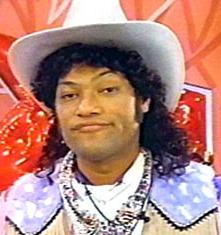 He doesn’t look happy about it here, but most times we swear he was happy as hell on the show.

– Beginning in 2010, Reubens successfully brought back his live stage show known as The Pee-wee Herman Show. The stage play features all of his old friends from the Playhouse and even the original Miss Yvonne. 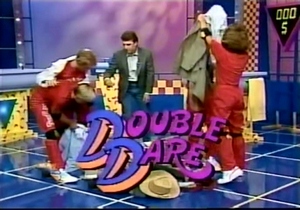 In 1986, Nickelodeon created Double Dare, the first game show made especially with kids in mind. The screwball trivia show was hosted by the always chipper Mark Summers. 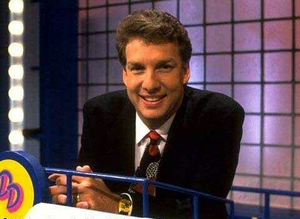 Maybe chipper isn’t the word we’re looking for. Coked out?

Each episode opened cold with Marc frantically yelling, “On your mark, get set, GO!” At which point a messy hellstorm of slime, chocolate syrup and whatever other goop they could find would be tossed around the studio as two teams (red and blue families) raced against a clock to complete in sloppy challenges and stunts. 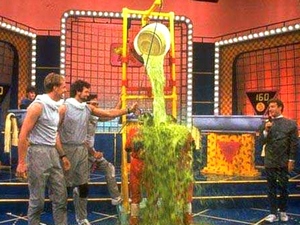 Each family would have to answer Mark’s trivia questions or dare the other team to answer first. If the dared team “double-dared” back, then it was on to the messy physical challenge. It was essentially a sick game of chicken which entailed contestants looking like a**holes on national television. It was glorious. 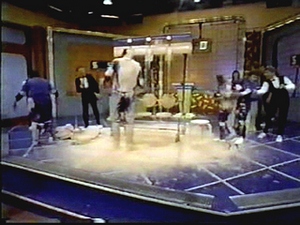 We wonder if Dad was still laughing about this back at home.

At the conclusion of the show, the so called winning team would get to compete in the notorious “slopstacle” course. For your viewing pleasure, here’s an awesome clip which features the host literally dragging two exhausted kids through the overly complicated series of stunts…

The reward was cash, prizes and a possible embarrassing trip in an ambulance. Imagine explaining to a confused EMT why you were covered in green slime and how you broke your ankle running up a maple syrup covered conveyor belt for a little flag. 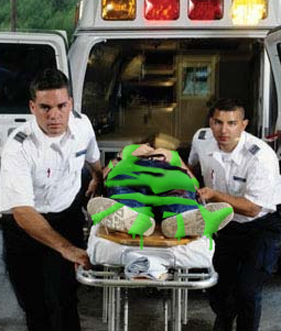 – The last anyone heard of this wacky game show was the revived Double Dare 2000 which didn’t last very long. Mark Summers has remained active. He currently hosts Unwrapped which is a program on the Food Network that discuses the origins of various foods. Unfortunately he doesn’t get to slime people anymore. At least not in public. 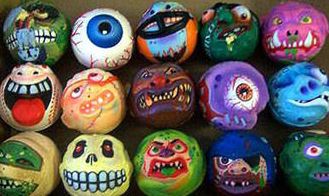 We don’t have much to say about Madballs because their popularity was somewhat short-lived. However for the briefest of times they were loved by kids in the 80’s so what the heck, we figured we’d “throw” them on the list. Madballs was a series of weird foam rubber balls created by AmToy, in the mid 1980s. Much like the Garbage Pail Kids, the toy balls featured often comically grotesque faces. One could say they were basically decapitated Garbage Pail Kids. Each ball had a character synopsis and an appropriately peculiar name. Frankly, we’re shocked they took the time to come up with back stories. 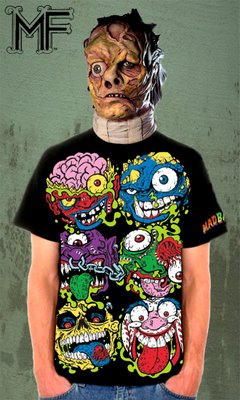 The biggest Madballs fan in existence.

Somehow the toy balls were actually turned into a short-lived cartoon show, a comic and a video game. Here’s the intro to the cartoon which naturally featured a modified version of the song “Great Balls of Fire” as their theme.

Also, here’s the comic which we’re sure is a collectors item to many 30 somethings. 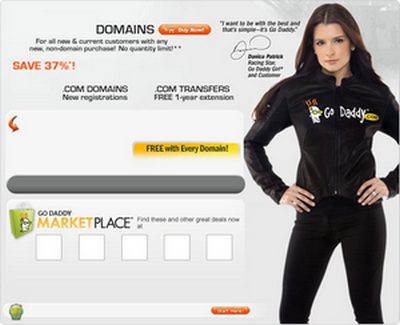 We wonder if they ever teamed with the X-Men?

– You’ll be happy to know that new Madballs and Madball related merchandise is still being sold today. With a few clicks you can satisfy your Madballs needs on the web at many fansites. Interestingly, Playbrain also resurrected Madballs as an Xbox Live Arcade 3D shooter, called Madballs in Babo: Invasion. The game predictably received mixed reviews. 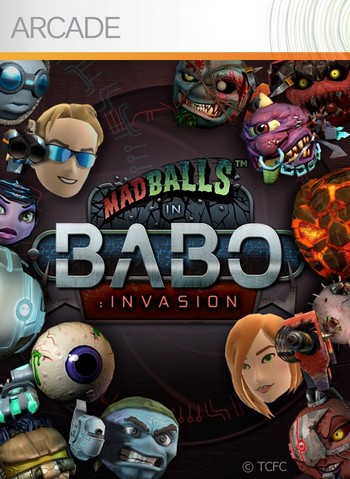 That’s it for now Weirdos. However, if we happened to miss your favorite 80’s kiddie junk don’t sweat it. We’ll be shamelessly revisiting this topic again much like Vh1.