Ask some fans of live performances why they prefer live to say, movies and one answer you will often get is this: You never know if someone is going to die. Well, these people did, or came damn close…

Karl Wallenda was the founder of the Flying Wallendas, a traveling circus daredevil act, also known as the “most ironically incorrect name imaginable”. He started tightrope walking at age six and continued to do so until the ripe old age of 73, when fate decided it had had enough of his “death defying” bulls?*t and decided to crop the first word from the phrase.

In 1978, Karl decided to walk a tightrope strung between the two towers of a Puerto Rican hotel, 10 stories off the ground. If the title of the article wasn’t a dead give-away, you have probably already figured out that things didn’t quite go as planned:

The old geezer lost his balance and fell 121 feet to his death, much to the delight horror of hundreds of onlookers, proving two things: ropes make sh?*ty bridges, and Wallendas don’t actually fly. Karl was once quoted as saying “Life is being on the wire, everything else is just waiting.” The 30 mph wind said “Pavement is the cost of being impatient”. There is some disagreement whether the wind or faulty guide wires were to blame, but I’m thinking the fact that most men his age are using a walker to cross the street may have had a part to play; A tightrope and a pole are a poor substitute. 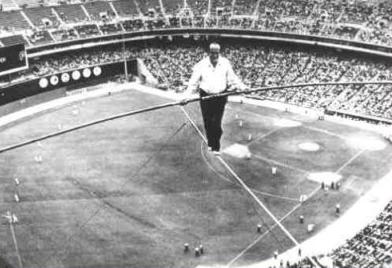 Tommy Cooper was a prop comic and magician from England, whose act was in existence before either Gallagher or Carrot Top, so I am holding him personally responsible for both of those a?*holes. His shtick was to purposely screw up his magic act for comedic purposes, while occasionally wowing people with actual magic tricks so that they didn’t think he was stupid instead of pretending. 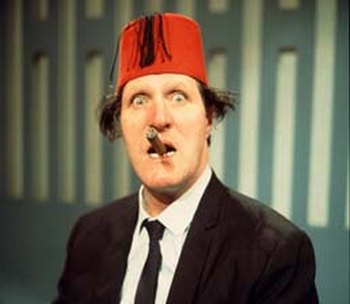 He looks easily as hilarious as both Carrot Top and Gallagher. And cancer.

He was also famously an enormous prick, to the point that his Wikipedia page includes a section titled “Legendary Meanness”. Assuming people in the past didn’t know that he would help usher in one of the worst forms of comedy, one can presume that he was a generally unpleasant person to be around (and he was). He screwed around on his wife, somehow convincing women to actually have sex with him, and would screw people on bar tabs regularly. One of the least dickish things he would do was pay for taxi rides by slipping something into the driver’s pocket and say “have a drink on me”. “Something” was not money, however, but a tea bag.

Showing that there is some universal justice, fate “tea bagged” Tommy during a live TV performance in 1984. During a live showing of Live from Her Majesty’s, Tommy suffered a heart attack. People laughed and had fun with it, assuming he was once again being “funny” and pretending. It took a while for people to realize he wasn’t kidding and was, in fact, dying. The show’s band was ordered to play music to cover things up and Tommy was moved backstage, although his clownish size 13 feet were sticking out of the curtain (and therefore visible to the audience) because at 6 foot 4 inches, he was too tall to hide entirely. Backstage was poorly lit, further complicating the attempts to revive him.

After 2 commercial breaks, they finally managed to haul him to a hospital where he was DOA. I imagine when he got to the pearly gates, St Peter told him he was going to enjoy some “tropical weather” before catapulting his a:* to Hell.