The Earth is constantly bombarded by all sorts of wacky things every day. Most of the time we simply don’t notice it because our atmosphere reduces whatever space debris that came our way to next to nothing (or actual nothing).

Earth also has a rich history of unexplained explosions. While easily passed off as cosmic in origins, these four examples do not have conclusive evidence to link them to meteors, comets, asteroids and the like.

It was a beautiful morning in Amazonas, Brazil, on August 19th, 1930. The sun was shining in clear skies as people began their usual routines. Then something really freaky happened around eight in the morning: the sun turned red. 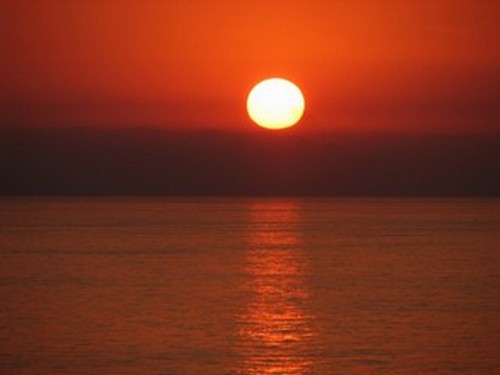 This will not end well.

As the skies darkened similarly: red clouds took shape and white ash rained down on the tree tops. Then three whistling sounds pierced the air, followed promptly by three massive explosions in quick succession. Before anyone knew what was happening the forest was set ablaze. The fires would last for months. 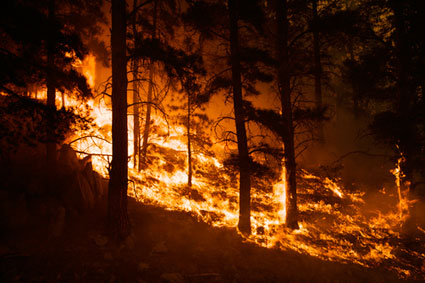 The villagers had no idea what caused the event. When they were visited by a missionary five days later they wanted to know what they had done to earn the wrath of God. He explained that explosions were caused by meteorites, but that hasn’t been confirmed to this day. Though there’s a site where impact could have occurred (in the jungle near the banks of the Curuca River) it didn’t contain any conclusive evidence that a meteorite caused the damage. The time of the impact, however, occur in concert with the Perseid meteor shower.

An estimated size of a theoretical meteorite based on the damage and alleged impact site places it between one-thousand and twenty-five thousand tons.

In 2002, the countries of India and Pakistan had been in conflict for over a year over the ownership of the Kashmir region. Both sides were heavily armed with nuclear weapons, so any escalation into war would only end in the use of horribly efficient bombs and the deaths of millions of people. Have we learned nothing from this wise turtle?

So on 6th of June the world collectively shat its pants when an explosion was detected over the Mediterranean Sea. Carrying ten kilotons of energy (the same as the atomic bomb dropped on Hiroshima during World War II), much of the world jumped to the conclusion that someone finally lost it and fired the first shot. Goodnight, planet Earth. You had a good run.

But when there were no subsequent explosions with neither side claiming responsibility, things got a little weird. Neither India nor Pakistan had sensors advanced enough to tell what specifically had caused the explosion, nor was there any evidence of it left after the fact. Those two factors could have led to overreactions from either side, but that thankfully was not the case.

Though there was no direct evidence stating so, the United States officially cited the event as an asteroid explosion. Because there was no impact on land there was obviously no crater, and any debris left over would have been washed out at sea, ensuring no evidence would be left behind.

Vela is a satellite system developed by the United States to monitor atmospheric activity. On September 22nd, 1979, it detected a “double flash” over the Indian Ocean. Double flashes are characteristic of nuclear explosions, so it was kind of a big deal. The explosion was measured at two or three kilotons. 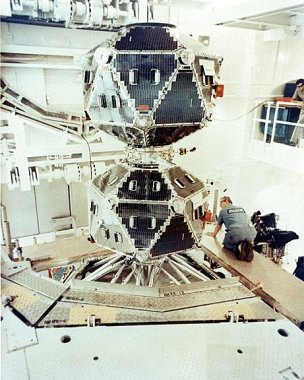 Almost immediately people doubted what Vela had detected, if it indeed detected anything at all. The satellite itself was ten years old at the time, and two years past its own designed lifetime, so the technology it used was most likely out of date. It was also known to have failed electromagnetic pulsar tests. There seemed to be enough reason to doubt it had detected a weapon detonation.

But then there’s the people taking credit for a weapon’s test. Those who first speculated that it was a weapon’s test believed it to be Israeli in origin, which had successfully tested a nuclear weapon only five years prior. However, there have been many claims that it was actually a South African test assisted by the Israeli government in some way. South African Deputy Foreign Minister Aziz Pahad confirmed this to the press, going on to say that Israel provided nuclear design information to the apartheid government in exchange for five-hundred and fifty-tons of uranium. The government official would go on to say he was only citing rumors.

It should be noted that the United States Air Force made numerous passes through the area with planes designed specifically to detect nuclear material, and they found nothing. Though the United States was among the first to claim it hadn’t been a nuclear weapon, doubt is widely held today and thousands of documents pertaining to the explosion have since been declassified, though they do not draw a conclusion.

On June 30th, 1908, the wrath of a vengeful god fell upon the Earth and had the misfortune of landing near the Podkamennaya Tunguska River in Russia.

Around 7:17 in the morning, locals began reporting a beam of bluish light racing across the sky. This beam was supposedly as bright as the sun. Shortly after artillery fire could be heard followed by massive shock waves that knocked people over and shattered windows for miles around. There are a few reports of people seeing an explosion, though these are few in comparison to people who felt what they believed to have been an earthquake. 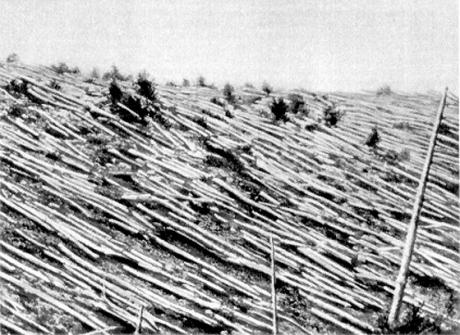 Needless to say, it was not.

Regardless, the explosion was massive, measuring in at between ten and fifteen megatons of TNT. To put that in a better perspective, that’s one-third the power of the Tsar Bomba, the largest nuclear device ever detonated, easily enough to wipe out entire an entire city. The sky was aglow for several nights afterward.

One of the most fascinating things about the explosion is that it didn’t leave a crater. The impact site is identifiable by millions of scorched trees, with the outward most trees having been bent or knocked over completely. This area covers eight-hundred and fifty square miles. Can you even imagine that size? 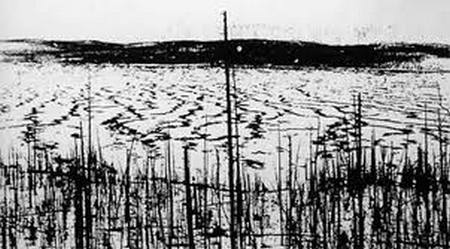 General consensus of the explosion’s source pin it on a meteor or comet that burst several miles above the surface of the earth. However, this is still debated and alternate theories have been proposed. One of the most popular is the “natural hydrogen bomb theory,” which states that a comet entering the atmosphere with high concentrations of deuterium could have undergone nuclear fission, creating the explosion. Another idea suggests the damage was caused by a miniature black hole passing through the planet, though this was rejected because there was no similar “exit wound” where the hole passed through the other side. Regardless, most alternative theories have been dismissed because they are inconsistent with mineral debris found in the area.