We’re all familiar with Greys and Little Green Men, pop culture’s go-to image of extraterrestrial life. However, some folks have come out of the wood work with even stranger descriptions. What follows are four such cases, some less known than others.

While working for a logging camp in the summer of 1994, Meng Zhaoguo and a pair of coworkers witnessed what they believed to be a downed helicopter on Mount Phoenix. Meng decided it was up to him to investigate rather than you know, calling for help. But while on his heroic quest something struck him in the head and knocked him out cold.

A short time later Meng came too and was approached by a ten-foot tall female alien with large eyes, six fingers and braided leg fur wearing a seamless rubber suit. This was followed by Meng’s strangest claim of all: that the two had sex for forty minutes while floating over the bodies of his sleeping wife and daughter. The alien left a five-centimeter scar on his thigh, because she was clearly a kinky sort of gal. 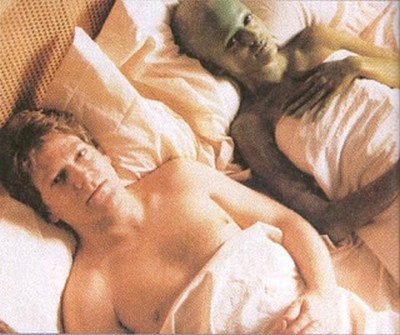 Only a month later Meng was abducted again, taken aboard a pristine white spaceship filled with similar beings. He asked to see his sex pal again, but was told that it would be impossible. On the upside, his son would be born sixty years later on a distant planet.

While alien abduction stories are always taken with a grain of salt, Meng’s tale raised a few eyebrows because of the relatively unique description of his abductors (braided leg fur?). However, he maintains that it really happened, and in 2003 a lie detector test and hypnosis determined that he at least believed his story. A doctor also looked into that thigh scar and determined that it couldn’t have been made through common injury or surgery, lending a little more creepy credence to the story.

In 1976, four men – brothers Jack and Jim Weiner, Chuck Rak and Charlie Foltz – went on a camping trip in the woods of Allagash, Maine. That sounds like the prologue to terrible horror movie, which we suppose is fitting given the subject matter of this article.

While things went smoothly on the first day, on the second the men saw the light of what they thought was a distressed weather balloon or helicopter. As the men watched, the craft crashed and seemingly exploded in the distance. Not taking that as a sign to call this camping trip done, the men stayed for two more days. On the third there was no incident. On the fourth the men saw the same craft they thought crashed while they were out on a lake. Charlie, being the helpful sort, used his flashlight to signal S.O.S. A beam shot out of the craft and enveloped the four men in short order. When they awoke they were on the shore with the craft floating only feet above them. It exploded yet again before reappearing over the tree line and darting away. Despite the bizarre occurrence the trip still wasn’t off. 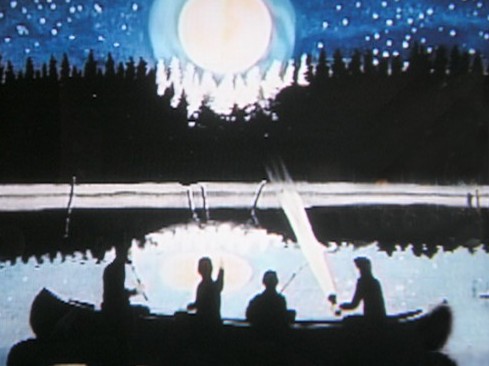 Jim began having nightmares shortly after of his arm being examined by a creature with a long neck, large head, bulbous metallic eyes with no lids and insect-like hands. What’s more, in his dreams his companions were seated on a bench on the other side of the room. Sometime in the 1980’s, at the suggestion of a UFOlogist, all four men underwent regressive hypnosis. What was discovered was that all four men had a consistent description of the same being and events, with each of the men recounting humiliating physical experiments. All four were deemed mentally unstable and passed lie detector tests.

In the early hours of November 29th, 1954, Gustave Gonzales and Jose Ponce were driving down the streets of Peatre, Venezuela to purchase pork from a butcher to later resell themselves that day during open markets. While they were driving, however, the street became illuminated with an intense light. The source of the light was a large metallic object blocking the road by hovering about a meter above it. Seemingly hypnotized by the light, Gonzales left the vehicle and began walking towards the UFO until he tripped over a short hairy figure.

The being had glowing eyes, retractable claws and a stiff fur coat. Gustave, apparently a very brave man, picked up the strange creature and found it to be incredibly light. It pushed him away single highhandedly, and as a fight looked to be breaking out Jose fled the scene to locate the police as more of the aliens escaped from nearby brush and leaped into their craft. One charged Gustave, who tried to attack it with a knife only to find it completely unharmed. Gustave was left with a series of scratches. 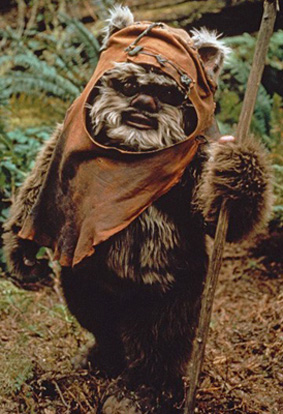 “Hairy Dwarfs” are among the oldest reported alien species but aren’t nearly as common as others, so they’re somewhat more obscure. There appears to be at least one other incident in Venezuela pointing to these creatures. In another attack later that year, two men tried to strike the short haired creatures with the butt of a rifle. The rifle broke.

In August 1955, Billy Ray Taylor was visiting the Sutton family in their farmhouse near Hopkinsville, Kentucky. Because the area is so rural, the farmhouse did not utilize running water. So, a thirsty Billy ventured outside around 7:00 PM to get a drink from the water pump. That’s when the trouble began.

Billy ran inside to tell the Suttons that he saw a disc-shaped aircraft covered in a series of bright lights flying in the distance. His claims were promptly dismissed as the family believed he saw a shooting star. Everyone had a good laugh until about an hour later when the family dog, tied up outside, began howling frantically and hid underneath the house. Thinking that perhaps this wasn’t a shooting star, “Lucky” Sutton and Billy grabbed a pair of firearms and investigated the situation. 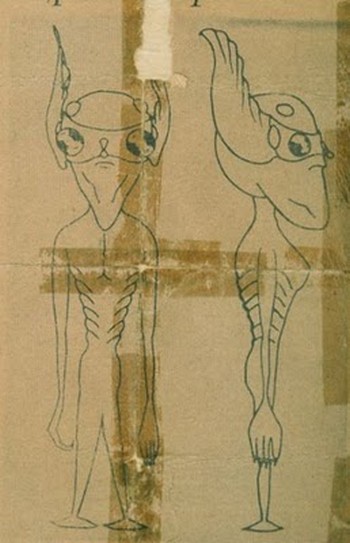 While searching outside, the duo saw something emerge from the trees, described as having a bulbous head, talons on its hands, large pointed ears and glowing eyes. More alarming than the bizarre appearance was its movement, as the three-foot tall creature looked to be rushing the house. The two opened fire, but the creature simply flipped over and ran in the opposite direction, seemingly bullet proof.

The two men returned to the inside of the house to discover that another member of the Sutton family had seen a similar creature peeking into the window. Throughout the night those in the house reported scratching noises from the roof, windows and doors as the creatures (which ranged in number from two to fifteen, though only two were seen together at the same time) harassed the family. The aliens were said to hover and stick to walls as well. Around 11:00 PM all eleven people in the house fled the scene and reported the incident to the Hopkinsville police.

The Hopkinsville Goblins were among the earliest widely reported UFO stories in America and abroad, so much so that the narrative has influenced several fictional stories in pop culture.