Initially conceived as a means to sell the associated song, music videos soon achieved such popularity that they’ve became an art form of their own. Videos became more elaborate, conveying more complex stories (often only tangibly related to the music). Sometimes artists would even sneak things in (or forget to edit out their mistakes). What follows are four popular music videos that fall into either of those categories.

Prince Doesn’t Want You To Buy His Albums

Whether you like Prince, love Prince or want to have sex with Prince, one thing is for certain: the man is both talented and completely off the wall insane. Sometimes his eccentrics are part of the act, like wearing high heels and bacon on stage. Others are a little harder to explain. 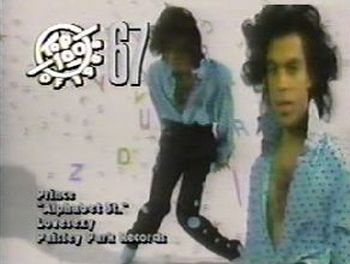 The video for 1989’s top ten single Alphabet St. has a few things to look out for, but what we’re looking for specifically is this: 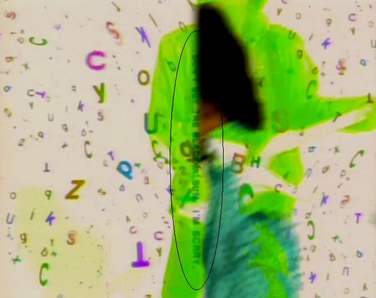 The message reads “Don’t Buy the Black Album, I’m Sorry” and is only visible for a split second (around the 0:26 mark in the video) among the jumbled letters. But thanks to the computers and modern DVD players, nothing can get past the eyes of the obsessive and paranoid.

As for what the message is referencing (which also appears in the lyrics sheet of the 0(+> album), the Black Album was recorded in 1987 and slated for release soon after. However, Prince opted not to release it for reasons that remain uncertain. While it’s true that Prince holds a great deal of unreleased or underdeveloped material in his vault, the timing of the album’s withdrawal (a week before release) raised suspicions that Prince wasn’t comfortable with the violent direction it had taken. At least one person close to the artist claims a bad drug trip lead him to believe the album was evil. Regardless of the reasons, the album became widely bootlegged before Alphabet St. was released. This was Prince’s plea to fans not to buy the album. Perhaps it was a subliminal effort.

Considered a one-hit wonder in the United States and a staple of every 80s themed dance you’ve ever been aware of, Dexy’s Midnight Runners are perhaps best described as the Come On Eileen guys. Even if you’ve can’t name another song off of the album Too-Rye-Aye or be bothered to learn the lead singer’s name (it’s Kevin Rowland, by the way), you know Come On Eileen. It’s inescapable and catchy as hell. 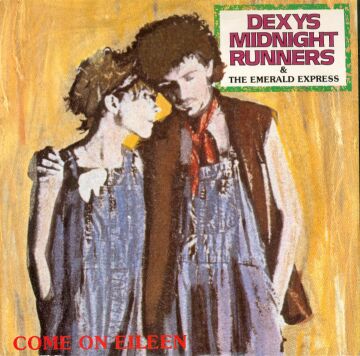 “They played The Twist, I did the twist! They played Come on Eileen, and they threw me out!”

The music video is famous for its imagery, making liberal use of coveralls and armpit shots. Check the video below and try to keep track of the number of band members throughout. Also, if you’re feeling a bit adventurous, take a shot every time you see someone’s armpit.

If you were paying attention/not incredibly drunk by the end of the video, you may have noticed that one of the regulars is missing at the tail end. His name is Seb Shelton, the drummer, and he may be the only person who lost their job because they decided to take a bath.

During Dexys brief career, Kevin Rowland went against popular image with how the band dressed. The image adapted for their sophomore effort Too-Rye-Aye was very plain (Rowland often referred to them as his “regular clothes”). This image was carried over into the video for Eileen, but Rowland took it one step further: to achieve a scruffy look he forbid anyone in the band from bathing during shooting. Shelton was fired halfway through the shoot for doing just that, though it may have been for the best: Dexys only released one more album (which failed to garner much success) before the band dissolved.

The Guns n Roses albums Use Your Illusion and Use Your Illusion 2 are notable for their theatrical videos. According to front man and jungle enthusiast Axl Rose, the videos for November Rain, Estranged and Don’t Cry form a trilogy with a narrative based on a Del James’ short story. It would seem that Mr. Rose is well read, so good on him.

Don’t Cry is featured on both albums with different lyrics. However, only one video was made. Watching it is like a game of Where’s Waldo in terms of name dropping:

It’s pretty easy to spot the Nirvana cap as well as the Red Hot Chilli Peppers and Jane’s Addiction tees, right? But what about this:

That’s Dizzy Reed, and apparently he doesn’t know where Izzy is. That’s because Izzy Stradlin, the bands guitarist, had left the group after the song was finished and didn’t make it into the video. It’s also a bit of an in joke for the band as Izzy apparently didn’t like filming videos.

Interestingly enough, the joke continues in the video for the band’s cover of Live and Let Die, also from the same album. Check out the milk carton around the 2:18 mark.

Trent Reznor and Marilyn Manson Are Self Destructive

Trent Reznor’s artistic vision tends to favor the dark side of things. His first video features his accidental death (which through a series of hilarious mishaps lead to an FBI murder investigation). More famously, the video for Happiness is Slavery was universally banned upon release for amounting to little more than high-end torture porn (for the longest time the video could only be seen on a pair of Nine Inch Nails video releases). The same could be said for Marilyn Manson, whose over-fondness for John F. Kennedy’s assassination and Christ imagery has landed him on many a watchdog list. They’re like two commercially viable yet decidedly un-PC peas in a pod. 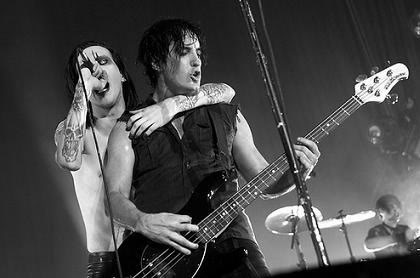 However, the two can’t be mentioned in the same breath without their long standing feud being brought up. Despite producing early Manson albums and touring with the band extensively, the two had a falling out that’s never been fully explained by either party. Reznor has said that Manson is dangerous to be around, widely believe to be a reference to his use of drugs, while Manson claims that Reznor lost the master discs he recorded with Nothing Records.

The reconciled and during this era of new-found friendship collaborated on the Nine Inch Nails video Starsuckers, Inc. (as the title is popularly censored).

Oh, a carnival! How fun!

There are a couple scenes in the video that seem to reference the two’s previous falling out. While destroying various objects bearing the likeness of celebrities, Reznor destroys a bust of himself during his Downward Spiral era. According to the man himself, he was unhappy with the person he was during that period and this was his way of letting go. Not exactly the first place you’d go to for inspiration, but there you go.

Another scene sees Reznor throwing compact discs in a toilet. Among them is Manson’s Mechanical Animals. Coincidentally, Manson also directed the video. While it’s been said to be a nod to their past relationship, there’s a solid chance that Manson just doesn’t understand how product placement works.

The video would be one of their last collaborations, as the two went back to bickering in 2001 and obscurity soon after.