History is riddled with strange coincidences. The history of the United States in particular has its fair share of “what the hell” moments one might not expect. Some are merely just that: coincidences. Others helped shape the course of history.

If you haven’t studied the history of the United States then you may have missed these moments. The following list focuses on those relating to Presidents.

A Booth Saves A Lincoln

On April 14th, 1865, President Abraham Lincoln was shot at Ford’s Theater by crazy man John Wilkes Booth. His dying words were “Shit son, I’ve been shot,” and are often immortalized by rappers in a similar situation. 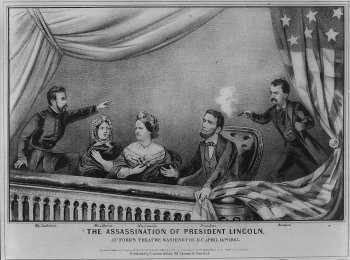 However, the Lincolns and the Booths had previous interactions that didn’t end in murder. Years before, Edwin Booth was boarding a train at Jersey City. At the time it was common for passengers to buy their tickets from the conductor as the train pulled into the station. The design of the boarding platform left a great deal of distance between the passenger and the train itself, creating a “death pit” of sorts. Before Edwin could purchase his ticket a man had been knocked into the gap through a combination of the train’s movement and the crowding of others. By his own account he was “helpless,” until Edwin pulled him up by the collar of his shirt. The man immediately recognized Edwin, a famous actor, as his rescuer, but Edwin was not aware that the man he saved was Robert Lincoln until he received a letter of thanks months after. 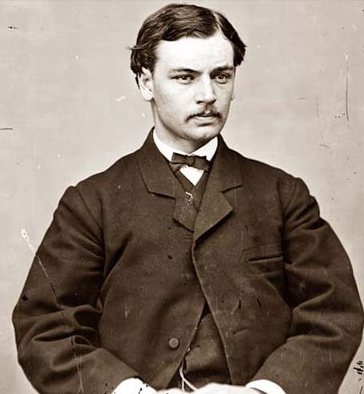 When his brother managed to screw the family name a few years later, Edwin comforted himself with the memory of saving Robert’s life. Robert, however, wouldn’t find comfort so easily.

Lincoln Saves No One

As the only child of President Lincoln to reach adulthood, Robert held a significant place within his family. However, he holds a strange place in history because at sometime during his life he was cursed by a traveling sorcerer to play witness to two Presidential assassinations.

Robert declined his parents’ invitation to Ford’s Theater the night his dad shook hands with a bullet. His decision against going was something he regretted for the rest of his life. After the death of his father, Robert returned to private life until James Garfield, a friend of the Lincolns, offered him the position of Secretary of War. Lincoln accepted this offer. Later he was offered to join the President at his college reunion. Running late, Robert arrived just in time to see Garfield get shot by Charles Guiteau, presumed college jock. 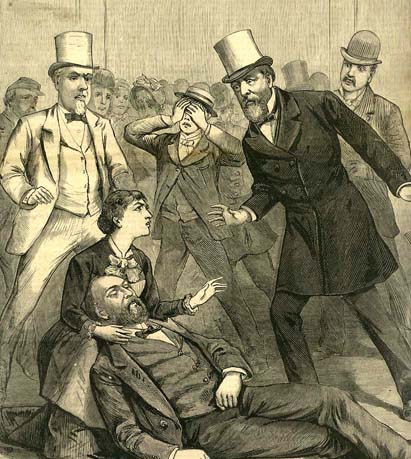 Having returned to private life again, Robert received another invitation in 1901, this time from President McKinley to attend the Pan-American Expo. Robert arrived to the Expo just in time to see Leon Czolgosz corpse the President. 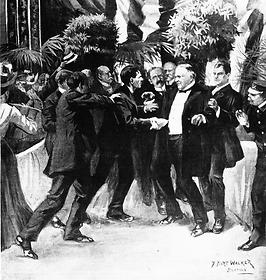 After the event Robert declined all invitations from Presidents, with the exception of the dedication of the Lincoln Memorial.

Frienemies to the Grave

American history presents the founding fathers as being the best of buds. The truth is you have a bunch self-important dudes with syphilis arguing over what is best for democracy. It’s unfathomable to think that all of these people got along together without incident. This incident took the form of John Adams and Thomas Jefferson, America’s first set of Presidential arch-enemies. 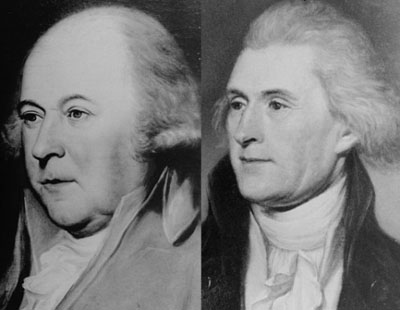 There can be only one, I guess.

Despite the roles the two men played in forming the new America, they were constantly at odds with one another. Everything seemed to be a matter of differing opinions, from the role government should take to the proper way to powder one’s wig. Their heated debates spilled over into Presidential elections; the two men served as the second and third Presidents, opposing each other both times. The first election, the election of 1796, is notable for the amount of mudslinging that took place, with “treason” being the popular accusation. 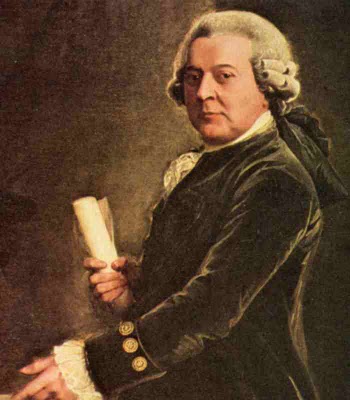 The hatred the two seemed to have for one another carried on well after the elections. It wasn’t until 1812 before the two would come to terms with one another, let alone be in the same room without an impromptu duel busting out. After Adams sent a letter to Thomas Jefferson, the two quickly became close friends and maintained the friendship until July 4th, 1826, when both men died a few hours apart from one another, fifty years after the United States adopted the Declaration of Independence. Adam’s last words are believed to have included Jefferson’s name. He was unaware that Jefferson passed hours before him.

Our Hero is the Enemy

You may not be familiar with the full history of the U.S. Presidency, but if you’ve ever attended a public school in America then you know the story of George Washington like the back of your hand: Young George cuts down a cherry tree, tells his father about his inability to lie about cutting down the cherry tree, has his teeth punched out by father of the year, acquires wooden teeth and uses them to thwart British tyranny, subsequently skipping forty or so years of his life. What people tend to leave it of the first President’s history is that he started out as one of America’s enemies. As a Colonel in the British army, Washington was on the ground floor of the French-Indian War of 1750. With the British and the Commonwealth of Virginia both claiming what is present day Ohio, a battle was inevitable. After winning a small battle Washington’s forces were promptly snuffed. Washington resigned, then volunteered a few years later. However, as a result of not getting a promotion, he resigned again and joined the forces of the revolution. And there you have it: America’s greatest hero is such due to a lack of career advancement.