It’s nice to have a hobby. Otherwise, your life would turn toward perpetual tedium and there’s a solid chance you’d wind up a serial killer, or at the very least an amateur taxidermist (still a hobby, but just plain creepy). But sometimes people take normal, non-disturbing hobbies a little too far as well. We’re not just talking about spending hundreds of dollars a year on baseball cards or buying shot glasses in every town you visit. No, we’re talking about the people who become so ridiculously obsessed with popular culture that ultimately, they base their very existences around them. And that, in its own way, is almost as creepy as amateur taxidermy. Almost.

For many of us Weird Worm writers, The Simpsons helped shape and define our fantastic senses of humor (note: we’re also all very handsome and virile). The classic, long running show about Springfield’s first family is one of the greatest and funniest accomplishments in television history, which isn’t bad considering it started out as a pretty horrible short on the Tracey Ullman Show. It has had some of the best writers and comedians in ever as part of its staff, so it’s no surprise that people might become a little obsessed with what might just be the most quotable show ever produced.

But we’re thinking that Glynne Williams may have taken his fandom just a tad too far. Glynne, a native of the UK, has what many people believe is the world’s largest Simpsons collection. According to reports, he has more than 30,000 Simpsons related items in his home, which means he must have a pretty big place, too much money and way too much time on his hands. Glynne has been working on his collection for more than a decade and spent upwards of £50,000 (which, much to our surprise, is not some wacky made up currency. Sneaky, crafty Brits). Even now, he reportedly buys 10 new items per week, rather than spending that money on perks like, you know, food and electricity. Glynne has priorities, after all. Now perhaps the most amazing thing about this story is that despite his obsession over a cartoon family, Glynne is actually married. And, naturally, his wife is an avid collector of teddy bears. Yeah, that actually makes sense. 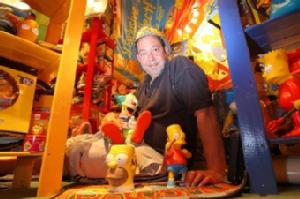 May the Dorks be With You

Just as The Simpsons has been one of the most influential shows to ever hit television, Star Wars and its sequels absolutely changed cinema when the brainchild of George Lucas emerged from a galaxy far, far away and landed on the big screen. Not only did it absolutely revolutionize special effects work (and in the process, created Industrial Light and Magic, the most famous special effects company in the world), but it also changed the very way that movies were marketed. In the past, movies were marketed based on boring things like “plot” and “characters” and “quality acting and writing.” But then George Lucas came along and decided that it was time for a change. Movies, he knew, would be better served if they were marketed on toys and collectibles and commercialization (just kidding, geeks, we love Star Wars too. Now put down your fake lightsaber and slowly back away).

People were quick to jump on the Star Wars toy bandwagon, too, and today figures from the original line go for hundreds of dollars on eBay. But one man by the name of Rob Foster has put together one collection to rule them all (oops – wrong trilogy, sorry nerds!). He and his girlfriend (really!?) have filled their home with hundreds upon hundreds of Star Wars action figures and other memorabilia, including LEGO sets and models. Maybe the most amazing part, other than his having a girlfriend (a fact that we’re still having a hard time believing), is that he only started collecting what has grown into the biggest Star Wars collection in the world in 1995. Okay, that’s not the most amazing part. The most amazing part is actually how insanely jealous we are of his original Wedge Antilles action figures. We’d kill for those things, man. 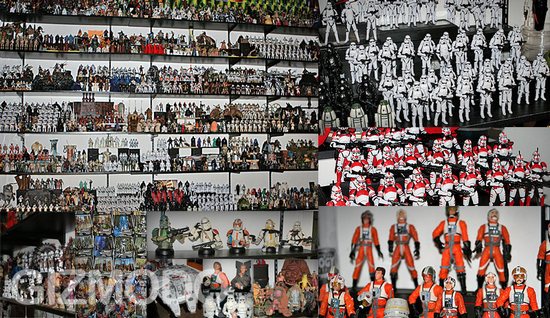