If you existed in the early 90’s, then you probably loved Calvin and Hobbes. Perhaps you wondered why such a popular comic strip never became a merchandising juggernaut like Garfield and Peanuts did. After all, Calvin was a fairly iconic character who anybody would’ve recognized on a shirt, and they could’ve made millions off of a stuffed Hobbes for your kid to hug and squeeze and love forever. So why can’t you find any of this stuff?

Simple; the guy who drew the strip doesn’t want it.

In short, if you own anything with Calvin and Hobbes in it and it’s not a book or that one shirt, it’s a bootleg. Because, as anyone who’s shopped the streets of a major city will tell you, people like cheap stuff, even if it’s ridiculously dumb and doesn’t line the artist’s pockets with anything.

Calvin Peeing On Anything

One of the more curious aspects of human existence is the desire to slap bumper stickers and decals all over your car. Not only does it kill your car’s trade value, it’s a cliché overload. If you saw a sticker at Hot Topic that sums up your edgy-as-Hell attitude toward the Pope and his demon Church, bear in mind 432,640,713,249,871,234,986 other people have seen the same damn sticker and thought the same damn thing.

So it is with Calvin and slapping his face on a car window. Or, in this case, slapping his bare ass and implied naughty bits on the window. For some reason, there are few bootleg Calvin items more popular than the stickers and decals showing him taking a piss on whatever it is the owner doesn’t like. Calvin: for when a generic peeing dog just isn’t strong enough.

Probably the most popular makeshift toilets are logos of sports teams. Drive around the Boston area and you are bound to find more than a few vehicles proudly displaying Calvin pissing all over the New York Yankees logo. The opposite is true if you go to NYC; they sure do love their pee-covered Red Sox logos there. Other times, Calvin might be peeing on a rival car company’s logo, such as a Jeep owner displaying Calvin’s urine all over the Toyota logo. And then vice-versa. 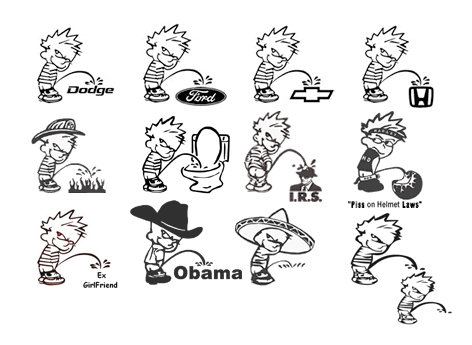 How can someone so small have such an enormous bladder?

Here’s the problem: the actual Calvin character did not give one iota of a damn about sports, cars, or anything else you might desire to be golden-showered. He was a solitary child, who had his real-stuffed-both-whatever tiger, his wagon, a cardboard box, and that’s it. He didn’t need anything else, didn’t care about anything else. The things he hated enough to feasibly piss on (girls, the school bully, his teacher) never get featured on these decals. It’s always sports teams or the President’s head. You don’t need Calvin for that; Sarah Palin could piss on Obama’s head and it would make sense. Though you might want to ask her to wash the car down with soap afterwards

Some people love bootleg products, but don’t like pee. That’s OK; it’s a free country. For those people, decals featuring Calvin on his knees, deep in prayer, are shockingly prevalent. Luckily, Jesus loves a comic strip character praying almost as much he loves people praying. 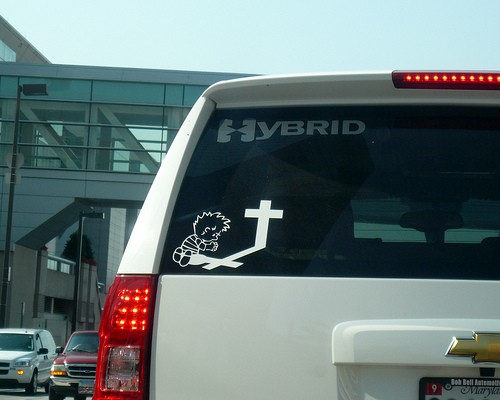 “I’m too busy to hit church this week; the cartoon kid with the tiger should suffice.”

This makes no sense, as anybody who’s read the strip more than once should realize. Calvin was a monster of a child, constantly running around like a maniac, destroying priceless objects, leaving huge messes everywhere, and throwing screaming tantrums to the point where his father once commented he and his wife would have been better off getting a dog. Calvin had a wonderful imagination, was basically an unnoticed genius, and got himself into many comic exploits, but if he were your child, you probably would’ve strangled him. In short, he wasn’t church material at all.

Also, never once is it implied, in any strip, that the family is religious or that Calvin cares about religion. So he’s likely not throwing a mess of water balloons at little Susie Derkins, and then running to church to confess his sins and pray for forgiveness. More likely, he’d move right on to the next game in his head, unless Susie pounds the stuffing out of him first. Which happened many times over.

Oh, and for those of you who love Jesus, pee, AND self-referential humor, you can use these stickers: 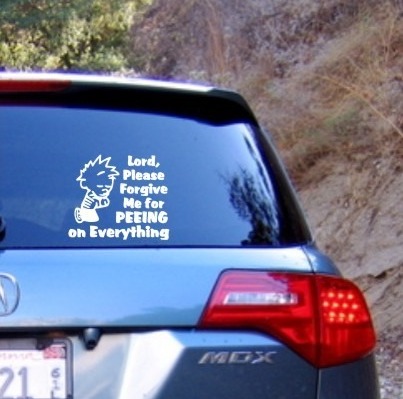 At least he’s apologizing. How can you stay mad after that?

As we mentioned earlier, Calvin is not an easy child to be around. He has, well, a chip on his shoulder about how unfair the world is to him and his dangerous, carnivorous jungle-beast of a best friend. That, coupled with his imagination running wild 24/7, makes life very difficult for his long-suffering parents, who probably have quite the therapy bill to deal with each month. This doesn’t mean he’s eternally pissed off at everything though and, even if he was, he wouldn’t be expressing said anger through platitudes so old even Moses was sick of hearing them.

There are tons of these “edgy” catch-phrases that you’ll see on an office wall, on desks, on somebody’s T-shirt, sometimes even on a tattoo that most people can’t afford to have erased once they realize the sheer idiocy of putting it there in the first place. The idea here is to convey to the world how cool you are without coming up with an original means of expressing it. And to add to the unoriginality, you can have a cartoon character that everybody knows “say” the phrase; this theoretically adds to the attitude. 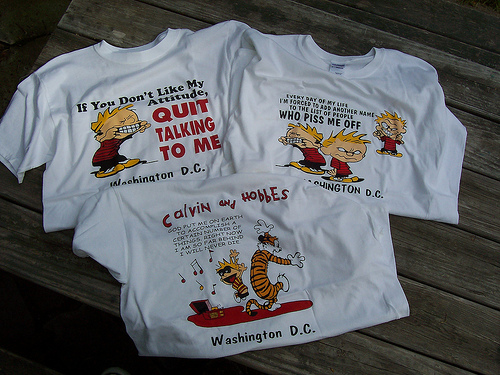 Soccer moms and receptionists everywhere dream of being cool enough for these shirts.

OK, WE GET IT. Calvin’s whole deal was being himself, and speaking his own mind, warped as it may have been. He could not have cared less about what anybody thought, even when those thoughts kinda sorta mirrored his own. A kid like him would be just about the last person to spew a tired old catchphrase that garners a quick chuckle around the office water-cooler and that’s it. Come to think of it, he would’ve been the last person to hang around an office water-cooler anyways. Or be in an office at all. Who knows what he would’ve ended up as? 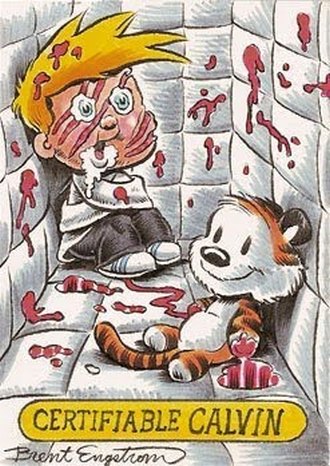 And into the final category of shamelessly bootlegged Calvin merchandise goes, well, everything else. As so many other franchises have proven time and again, some people will buy just about anything if you slap a famous head on it. Bill Watterson could have exploited that and made more money than the world actually has; we would actually have to destroy even more trees to make more money just to pay the man.

But he didn’t want that. He wanted to write the comic, express himself, sell book compilations, and retire to never deal with the media ever again. Which he has; if you actually manage to meet him and talk to him, you’re either his family, the guy who sells him his art supplies, a damned liar, or you’ve taken some bad drugs and you’re hallucinating. See a doctor.

Watterson’s anti-licensing stance, of course, has not stopped anybody from marketing his creation for him, sticking Calvin and Hobbes on cups, shirts, cigarette cases, ink stamps, watches, mousepads, keychains, boxer shorts, ties, and basically anything else that exists and can be sold. Watterson, of course, makes not a dime off of these things, nor does he ever want to. He’d rather these products not exist at all, since it’s selfish and soulless capitalism at its absolute worst. But hey, that’s what he gets for taking his work and art too seriously. After all, there’s truly no better way to showcase your love for somebody else’s work than to walk around with a naked six-year-old boy on your chest.