Love songs can be incredibly powerful. When you’ve really nailed it, you speak to something within all of us and it can even bring people to tears. But when you miss the mark completely, you can also make an entire room of people feel a unique mix of shame and regret. These are the latter.

“Nights on Broadway” by the Bee Gees

It’s hard to deny the raw sexuality of the Bee Gees… unless you’re actually looking at them. 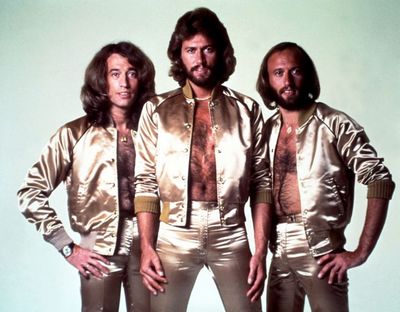 So what kind of person can spurn their love? Nights on Broadway answers that question:

Here we are, In a room full of strangers Standing in the dark Where your eyes couldn’t see me

Well, that completely undermines our Hideous Bee Gee theory, but okay. The only person who couldn’t possibly love you is someone who can’t see you. Because you’re standing in the dark. In a room full of strangers.

You know, before this song continues we’re going to go ahead and dial 911, just to get ready. Well, I had to follow you Though you did not want me to But that won’t stop my lovin’ you I can’t stay away

Oh, so you’re openly admitting that you’re a stalker. That’s pretty bold of you. But why, collective Bee Gees? What drove you to such maddening lengths?

Broadway? Broadway drove you to future appearances on Court TV and pepper spray? We’re sorry, but we don’t believe that Cats is really capable of subverting human willpower like that.

It’s probably safe to say that we all fell in love with George after the Faith music video. 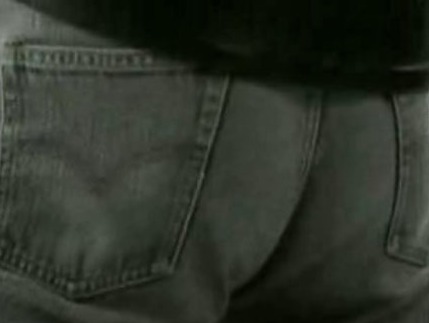 But who does George Micheal love? We now know the answer is men, but back in 1988, Father Figure proposed a different answer all together:

That’s all I wanted, something special, Something sacred in your eyes, For just one moment, to be bold and naked At your side

Right off the bat the listener is tipped off that something is about to go horribly wrong by the presence of the word “sacred.” Sacred only serves two purposes in love songs: to ensure that no one ever takes them seriously or to compare them to medallions in The Legend of Zelda, which also fulfills the first purpose.

Moving on: Sometimes I think that you’ll never understand me

For those of you who have taken a creative writing class, this is called “foreshadowing.” George repeats himself a bit before completely blowing his cover:

I will be your father figure (Oh baby)

It’s an interesting man who announces romantic intent by stating that will be a father figure. This line alone is enough to raise some eyebrows but try it in a few other contexts:

“Will you go to prom with me? I promise to be just your father.” “Will you marry me, or at least allow me to be your father?” “How much for a reach around? I can assure you, I’m very fatherly.” Yeah, still not working. Thankfully George has a back-up plan: Put your tiny hand in mine (I’d love to) I will be your preacher teacher (Be your daddy)

Later on in his musings George all but recognizes that what he’s pursuing is wrong on at least one level: But sometimes love can be mistaken for a crime

Tip: never enter a room with George Michael if the doors in said room can be locked from either side. Just sayin’.

Little Peggy March holds the records for the youngest female recording artist to reach number one on the Billboard charts (age thirteen). Suck on that, Kidz Bop. 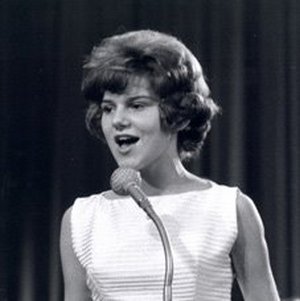 The song in question was her first release and proved to be her biggest success. A translation of the French song “Chariot,” I Will Follow Him sold over a million copies and fulfilled the fantasies of prison inmates everywhere.

Hey, that’s a nice sentiment. Living in an age where divorces have become the new handshake, it’s nice to reflect on a time when that wasn’t necessarily the case.

I will follow him. Follow him wherever he may go. There isn’t an ocean too deep, A mountain so high it can keep, Keep me away.

Dawwwwww, ain’t that sweet? Almost makes you want to watch her try to swim across the ocean for her love. We mean, yeah, it would definitely kill her and all, but it would be heartwarming, at least before she drowned.

I must follow him. Ever since he touched my hand I knew, That near him I always must be. And nothing can keep him from me. He is my destiny.

There we go. To begin, destiny is a word reserved for Pokemon theme songs and suicide bombers. We can’t help but think that she sings this line with a blank stare that could pierce eternity. Second, flat out saying that nothing can keep him from you pretty much paints you as being a psychopath. It’s cute when you throw the ocean or a mountain in the way, but “nothing can keep him from me” is exactly what you would say when opening fire on a maximum security prison.

And therein lies the crazy. Not only does she make it crystal clear that nothing he could ever do could convince her to leave him alone, she decides to over emphasize the fact by creepily repeating it three times. Notice that she never actually says anything about why he’s worthy of this limitless devotion. She just touched his hand once. Did he shake her hand at a party? Help her cross the street? Give her change at the bank? Does it matter? Not really. He’s hers… forever… forever… forever…

After the Beatles split, each of the Fab Four pursued a solo career. However, if your name wasn’t Lennon or McCartney then you never again reached the same lofty heights you once stood upon. For Ringo Starr however, the challenge was much more difficult considering his song writing credits amounted to little more than “Octopus’s Garden” (which was rewritten by George Harrison) and the immortal line “I’ve got blisters on my fingers.” For his solo career, Ringo decided to lay it all on the line:

You come on like a dream, peaches and cream, Lips like strawberry wine. You’re sixteen, you’re beautiful and you’re mine (mine, all mine)

That’s a little unconventional. Generally speaking, the lips of a sixteen year old shouldn’t taste like wine unless they’ve been drinking, and even then they usually can’t get alcohol unless an adult buys it for them- 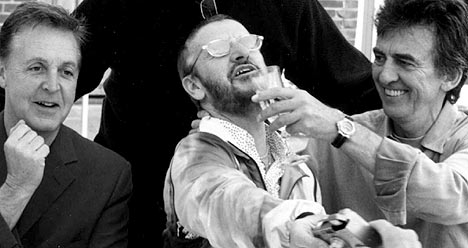 Okay, maybe we’re reading a little too much into this. We’re not going to jump the gun and claim that Ringo Starr intoxicates teenagers. Let’s continue:

You’re all ribbons and curls, ooh, what a girl, Eyes that sparkle and shine. You’re sixteen, you’re beautiful and you’re mine. (mine, all mine, mine, mine)

Maybe he’s describing his daughter? Yeah, we guess that could work. And they kiss on the mouth because they’re just really, really close, right? We can believe that. For a second we thought-

You’re my baby, you’re my pet, We fell in love on the night we met. You touched my hand, my heart went pop, Ooh, when we kissed, I could not stop. Oh for Christ’s Sake, Ringo. She’s only sixteen. How old are you again? Written by NN – Copyrighted © www.weirdworm.com Image Sources