Ah, the good old police force. We look to them for protection, to keep the peace and we also enjoy that faint odor of bacon that accompanies them everywhere they go. Sure, we mock them now and then by joking about their love of donuts (when in reality, we all know they prefer Twinkies) and we curse them when they pull us over for going five miles over the speed limit (when in reality it was more like twenty), but all in all we’re glad to have them out there watching out for our safety and well-being. Well, most of the time, anyway. Except of course when those cops are, well, these cops…

Thanks for the sex, and you’re under arrest.

Now we’re just going to tell you from the start that you will probably notice a theme developing throughout this list, and that theme is simple: to protect and service. See what we did there? Wasn’t that a clever play on words? Okay, stop with the compliments, we need to get down to business. Which coincidentally is just what these first cops did in order to bust a prostitution ring at a massage parlor in Virginia. Now that, ladies and gentlemen, was one hell of a segue.

It seems that in Spotsylvania County, the sheriff’s department was determined to crack down on the prostitution ring they suspected was being run out of the aforementioned massage parlor, so they sent in undercover detectives to find out what was going on. And then these detectives proceeded to not just find out that prostitution was taking place, but dive right in and received their very own “happy endings”. One detective was even so generous as to leave a $350 tip. And since the sheriff knew the women would never incriminate themselves verbally, he was fully aware this would happen… repeatedly. Completely sanctioned solicitation. It must have been awkward when, at the end of the happy ending, the masseuse cleaned her wrists only to make way for a set of cuffs. 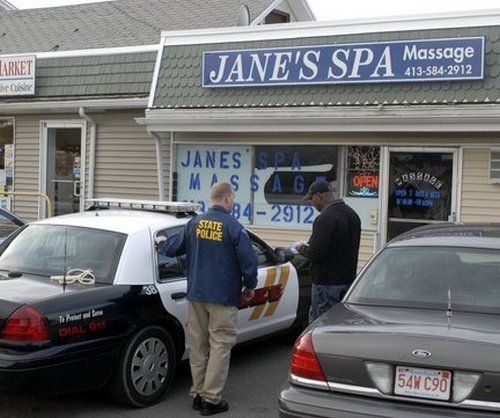 Have sex with me, there might be a future in it!

Of course, unlike with the massage parlor shenanigans, some sex is not quite so sanctioned and is just a tad bit more frowned upon. Like when a superior repeatedly attempts to solicit sex from an employee. Which is exactly what happened with Portland, Oregon police chief Derrick Foxworth, who suffered what doctors like to call an acute inability to keep it in his pants. Seriously, the dude was married (and going through a divorce), living with a girlfriend and still found the time to solicit one of his employees, who actually gave in from time to time.

The police chief didn’t even really try to be discrete about it, either. Seriously, the dude used department phones to call her and e-mailed her with his often kinky requests. This was either because he thought he was too big for anyone to try to take him down or because he was too dumb to realize that he was leaving a gigantic trail of evidence of his sexual misconduct. Foxworth was later demoted and actually had the stones to sue the city claiming it was due to his race. The thing is, apparently the Mayor actually knew all about the relationship and was later accused of being part of a cover up prior to the demotion. Boy, if you can’t trust elected politicians, who can you trust? At least I still have my secret Canadian family.