We don’t ask a lot from our television sitcoms. Seriously, how else can you explain shows like According to Jim? One of the things we do ask for is a little consistency. You know, like if you’re going to make a show about the all-American family you might want to leave out random appearances by dinosaurs or superheroes (on second thought, no, don’t do that, because that would be awesome).

Anyway, sometimes a show’s writers will start feeling a little frisky – or possibly get a little high – and decide to really mess with the audience’s mind. What we’re left with are episodes such as…

Now it’d be tough to argue that Family Matters was really ever what you’d call a “normal” sitcom. For example, at one point, two of the protagonists (Carl and Urkel) decided the best way to settle their differences was to appear on American Gladiators. But at its core it was a show about family. And, well, matters therein. Also: an annoying nerdy neighbor who really had a hard-on for cheese and catch phrases. But, mainly, it was about family (originally).

So that’s why the episode entitled “Dr. Urkel and Mr. Cool” was so completely off the wall. By this point in the show, the central theme of family had been pretty much abandoned, but if it was holding onto the edge of a cliff, this was the episode that stomped on its fingers until it let go and went plummeting to its death. This, of course, was the episode that introduced Stefan Urquelle, Steve Urkel’s alter ego who was everything Steve was not. As in: cool, smooth and not remotely funny.

Apparently Urkel was the most brilliant scientist on the planet based on this creation, but instead of inventing anything useful like a cancer vaccine or hoverboards, he decided to selfishly come up with a machine that would make him cool in order to win Laura’s heart. Come on Steve, if you’re going to become cool to get the girl, you could at least set your sights a little higher. 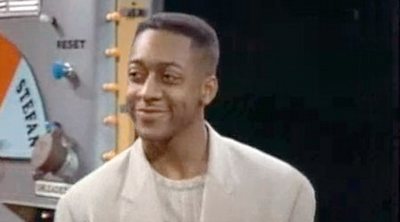 Before the Fonz literally jumped a shark, giving birth to that phrase which (would itself become tired and cliché), the gang at Happy Days found themselves in one of the most out of left field episodes ever seen on television. Robin Williams, the cocaine fueled man-squtch, popped into town playing Mork (soon to be of Mork and Mindy fame).

Happy Days, inspired at least partially by the classic film American Graffiti, had been a nice, normal look at the traditional family in the 1950’s, along with their short hoodlum friend who liked to give the thumbs up a lot. Psst… remember that, it’s important later.

Anyway, out of nowhere, an alien named Mork pops into town in order to abduct Richie Cunningham for a number of experiments back on his home planet of “Ork”. Naturally, Richie is none too pleased with this idea as he was fairly protective of his sphincter (we’re right there with you, Richie). 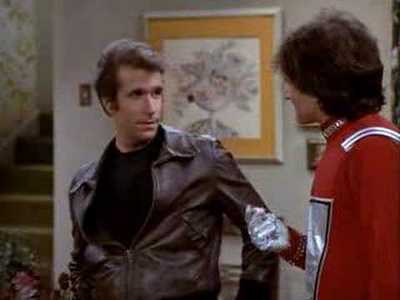 That’s not the kind of leather jacket a rational man would mess with.

To make a long story short, this all builds up to a final battle between Mork and the Fonz, because Richie was too much of a wuss to fight his own battles. Mork freezes Fonzie in time, but through the sheer awesomeness of his thumbs (told you that would be coming back into play!) and his ability to turn on and off the jukebox by hitting it, Fonz overpowers Mork. In the end, Richie wakes up and we’re meant to believe it was all a dream until Mork shows up right at the end of the episode, giving a report to his alien boss. Soon after, he’s told he’ll soon be travelling to the year 1978 and his own lackluster spinoff.