Most major celebrities, even if they hate their fans and truly want nothing to do with their screaming and obsessing over every little facet of their lives, know better than to come out and say it. If they actually admitted how useless and pathetic they think the fans are and how they exist only to fatten the wallets of those more famous than them, it would be instant career suicide. So obviously, they can’t do that. But these five have come pretty damn close.

Forget, for a second, the endless over-competitive nature that drove Jordan to relentlessly berate teammates and throw tantrums until they played the way he wanted and actually helped him win NBA Championships. That’s only helpful to you if you’re a former NBA player and, if you are, you’re probably not reading this, as you’re too busy counting your money or scoring with groupies or recovering from knee surgery. No, we only need to focus on three facets of Jordan to show how little he thought of the average fan:

First off, he stuck his name onto everything under the sun. And we mean everything. Michael Jordan was an endorsement sell-out the likes of which the sports world had rarely seen. If a check was waved in his direction, he would shamelessly endorse the product; it didn’t matter if it made sense or not. We can see a basketball player endorsing basketball sneakers, or a basketball videogame, or even a cereal like Wheaties, since boring wheat-centered cereal without cute little marshmallows inside would be helpful toward playing with the energy needed to be a champion.

But fast-food? Batteries? Underwear? Pieces like that are proof that you are completely in it for the money and you don’t care who knows it. This point was further hammered home once he released his own cologne, because the only true way to woo your lady is through smelling like you had just run up and down a basketball court for 48 minutes. She didn’t pass out, she swooned! Just keep telling yourself that. 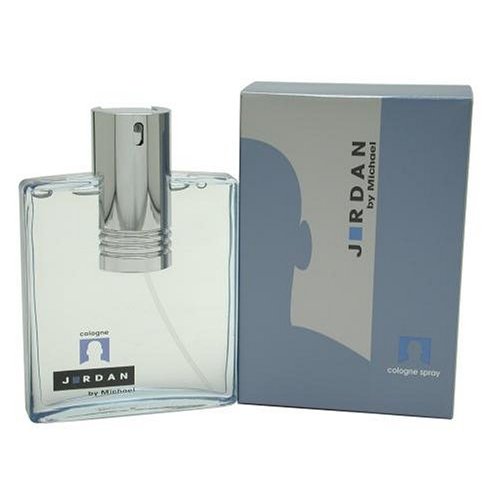 “Is that eau de sweaty jockstrap? TAKE ME NOW!”

Later on, when it came time to induct Jordan into the basketball Hall of Fame, he decided that his designated speech time, which most people use to wax nostalgic or to thank those who helped them make it to the pinnacle of their sport, would best be spent blasting everybody who even remotely doubted him at any point in his life, pre-NBA or not. Nobody was spared: General Managers, owners, fellow players, not even a coach who benched him in his high school days. If you screwed MJ at any point in his life, he made damn sure that everyone knew about it and about how badly you can suck it because he proved you wrong. So there.

Take THAT, guy from 25 years ago! You best sleep with one eye open. 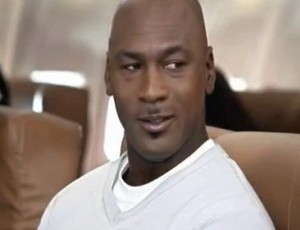 Take THAT, guy from 25 years ago! You best sleep with one eye open.

Yes, Michael Jordan grew an Adolph Hitler moustache. He even filmed an underwear commercial while wearing it. Now, Jordan is not a stupid man; he has to know what a little piece of hair right below your nose signifies. Does he care? Evidently not. He has millions of dollars, six rings, a Hall of Fame plaque, and a significant proportion of the population arguing that he is the greatest basketball player of all time. He could not care less if you look at his upper lip and think of mass genocide. He’s got batteries to endorse.

If Jordan was a shameless marketing whore, then Gene Simmons of KISS was the high-priced, long-tongued Madame who taught him every trick he knew. Simmons was (and still is) shameless about sticking the KISS name onto anything that is visible to the human eye (and some things that aren’t, if the story of KISS using some of their own blood to ink their comic book is to be believed). 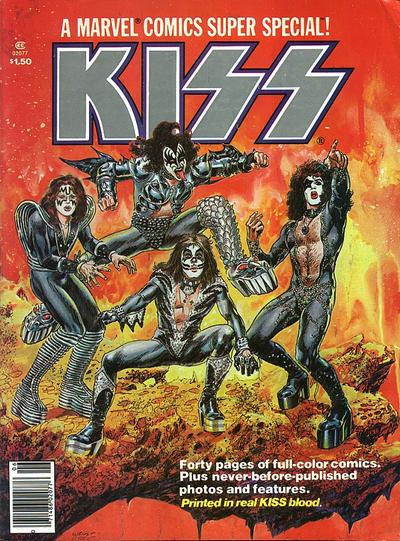 The KISS comic is bloody awful, and so was the pun we just made. We apologize. 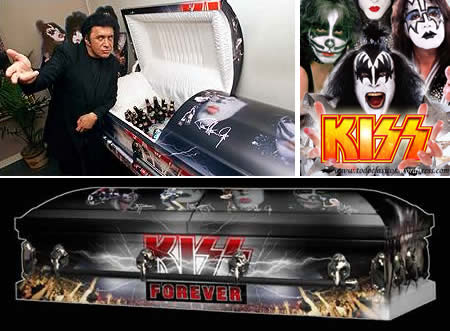 The Kiss Kasket: its mere existence is funnier than any joke we could make

Gene Simmons is almost certainly a very self-aware man. He likely knows how hokey the hundreds of ridiculous KISS products are, and he definitely chokes back snickers when he talks about how the KISS Kasket also doubles as a handy-dandy beer cooler (except for, y’know, when one of your friends actually dies). Does he care if he’s a complete sell-out? As long as people buy the stuff, he doesn’t care at all, and he has no problem showing how little he cares about your criticism. He’s got Kiss Kondoms to market, after all. 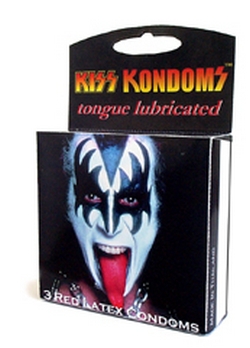 Any baby born due to a broken KISS Kondom will be ugly. Truth in advertising, after all.