One of the primary teachings of Christianity is to love everybody. Forgiveness is key; because we are all born sinners none of us are truly worthy of love. To quote Jesus himself, “Don’t act like your shit doesn’t stink, my children.” So no matter what you’ve done in your life, the love of Christ is always available to you, even if that means you pay the bills by getting boned by complete strangers for a living. 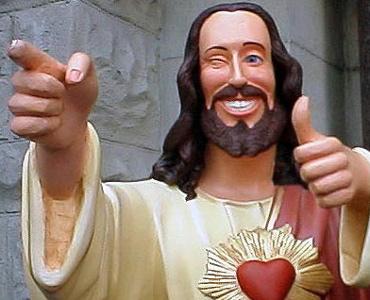 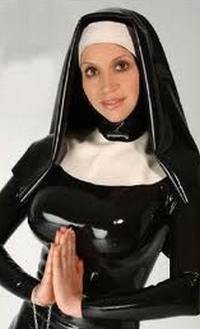 What would He do indeed.

Despite the actual scriptures themselves remaining intact and thus suffering from a severe lack of boobs, the publisher, American Bible Society, decided to opt out over concerns that the cover might be deemed inappropriate or insulting by people who apparently don’t know what Jesus is about. Foster and Gross operate a ministry with a specific anti-pornography message at XXXChurch.com (Warning: the church itself is criminally un-erotic).

For those of you who have somehow yet to experience the wonders that are Conservapedia, allow us to explain. A home school teacher discovered that Wikipedia has a strong liberal bias somewhere in all those “random article” clicks. To combat this, he started his own Wiki project, Conservapedia. Unlike their older brother, Conservapedia isn’t open to everyone for editing. To be allowed in the inner sanctum you must meet two requirements: 1. Have a conservative stance on American politics 2. Love Jesus a whole lot

Part of Conservapedia is the Conservative Bible Project, a translation of the entire Bible to remove what is perceived as a liberal agenda added to later translations. If you’re scratching your head wondering what that means, here’s a helpful quotation: from the site itself:

“Socialistic terminology permeates English translations of the Bible, without justification. This improperly encourages the “social justice” movement among Christians. For example, the conservative word “volunteer” is mentioned only once in the ESV, yet the socialistic word “comrade” is used three times, “laborer(s)” is used 13 times, “labored” 15 times, and “fellow” (as in “fellow worker”) is used 55 times.”

Something as simple as word choice has corrupted the Holy Word, rendering to little more than a communist manifesto. 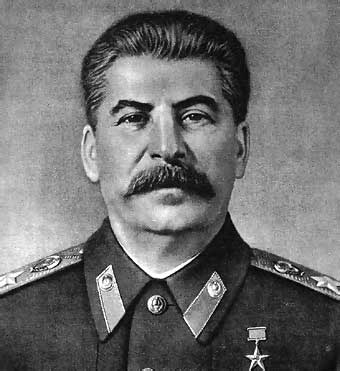 The most often referenced line questioned by the translation is Luke 23:34, wherein the crucified Jesus says “”Father, forgive them, for they do not know what they are doing.” The line itself has been called into question because it appears only in Luke and not Matthew, Mark, or John. However, Conservapedia’s reasoning for removal is because some of those who condemned Jesus to die knew very well what they were doing. The line is clearly an attempt by Chist killers to get into Heaven.

When has a joke run its course and slid of the course, resulting in a tragic death à la Dale Earnhardt? When it reaches well beyond its original means and perverts everything it possibly can. Take the RickRoll, for instance. What began as a slight inconvenience on the internet quickly slipped its cyber-shackles and invaded telephones, parades and American Politics.

Though not the earliest internet meme by any means, LOLCats are perhaps the most recognizable because they’re all inclusive. There’s no inside joke to get: just accept that cats are adorable and have poor spelling and grammatical skills and you too can enjoy the wild, wild world of LOLCats. 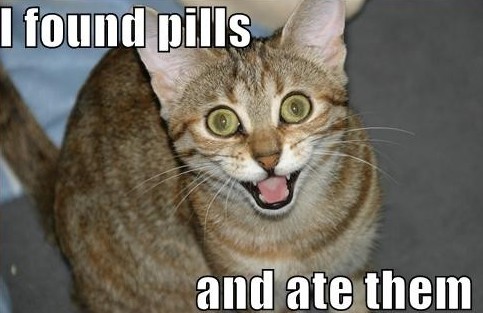 This is the wallpapering in Hell.

The LOLCat Bible is another Biblical translation project, this time showing less interest in a political agenda and more interest in being borderline incomprehensible to normal human beings by rewriting the entire Bible in lolspeak. It’s like the gospel according or IRC. How bad is it? Let’s use Luke 23 as our example again. Here’s Jesus on the cross, for those of you who may not have heard the story:

Here’s the death of Jesus:

It wuz around six an it gotted dark for three hourz, bcz teh sun stoppted shinin. An teh curten in teh templ wuz torn in half. Dat wuz a mirakl, no wun wuz sharpnin dere clawz on it or nothin, srsly. Jesus wuz all “Ceiling Cat, I sendz mai spirit to u.” An den he died. Was ver sad, I creid 🙁

But teh apoclypsez wuz liek “STFU” an didint beleev dem. Peter at leest wented to teh tomb witch wuz a hold in teh wall. He saw peaces ef yarn dat Jezus Kat did got tangleds up in real bad an he wuz liek “WTF?”

As you can see, the end result of this project is to take your standard English Bible and push it through a retarded blender. Then make it available for sale at the reasonable price of $9.23!

The popularity of Japanese comics in the West has lead book publishers to make some pretty odd adaptations. For example, did you know that many of Shakespeare’s plays have gotten the big eyed, tiny nose treatments? Or that Dean Koontz himself has jumped on the manga bandwagon? 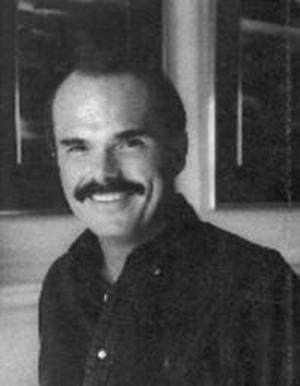 Next time on Dragon Ball Z.

Is… is this a good idea? Is this one of the many things that Jesus wouldn’t do? The comic, written and drawn by British artist “Siku,” has received mixed reception and for obvious reasons. Some people might find it offensive to portray our Lord and Savior in an art style often associated with graphic violence and sexual deviancy. The manga angle is taken all in, too. Just get a look at Jesus here: 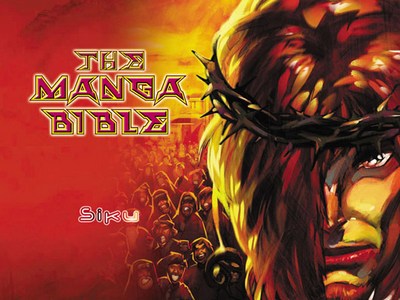 Blood of the lamb, bitch.

Jesus, a figure often associated with forgiveness, looks as though he’s about to come down from his cross and kick some Roman ass. Despite the subtitle “From Genesis to Revelations” the author has hand-picked which parts of the Bible make the cut, tending to focus more on action-oriented scenes. This was most likely done so Jesus could be portrayed as terrifying man more often.

That guy in the hood is Jesus. The other guy is either Satan or some sort of Star Wars droid.