The 3rd movie in a series is what turns a set of movies into a movie franchise, and signifies the ultimate attempt to squeeze every last drop of profit without having to come up with any original ideas. There are some threequels that are well thought out, and brilliantly accentuate a franchise, leaving an indelible legacy on Hollywood history. 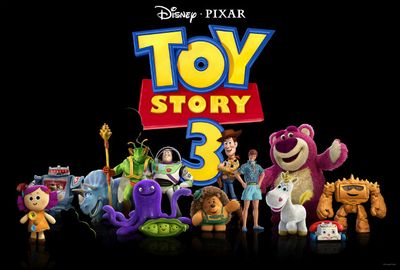 But for every one of those, there are a dozen threequels that are disastrous, and cases of actors going back to the well one too many times are far too common in Hollywood. Here are 4 actors who should have found a new direction to take their careers in, instead of losing a lot of rep coming out for just one more round, and getting clobbered by Mr. T. 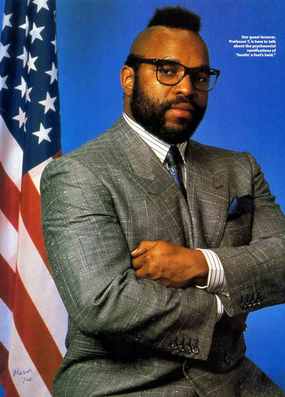 A President T. message to Danny Glover: “If I ever see Lethal Weapon 5 in theaters, I will beat you Rocky style.”

The problem with Eddie Murphy is that he’s hilarious for a couple of hours at a time, but when subjected to his antics longer than that, you start to fight an overwhelming urge to slap him lightly across both cheeks with the sharp end of a claw hammer. The original Beverly Hills Cop is a classic movie that helped launch the production career of Jerry Bruckheimer, for which all fans of action movies are eternally grateful. 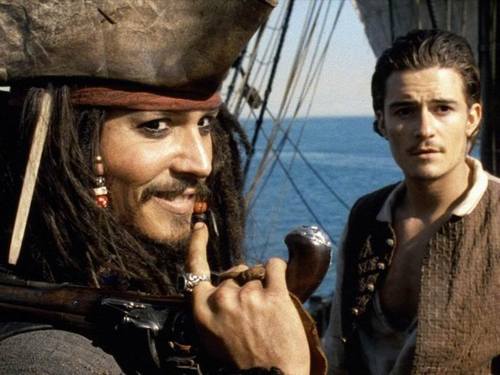 Thank you Eddie Murphy, thank you so very, very much.

The suspension of disbelief started to get excessive with the release of Beverly Hills Cop 2. We were supposed to belief that a Detroit cop would make yet another trip to Los Angeles, to make all the LAPD detectives look like rubes and bust up another crime ring? Alright, fine. Fool me once, shame on you. Fool me twice, shame on me. Fool me thrice? Ain’t gonna happen. There is no way they could possibly expect us to believe that Axel Foley would find it necessary to go back to LA again, rig… 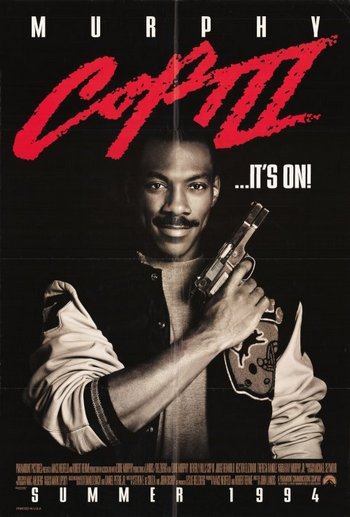 Now we’ve just gone into movie premise bullshit territory. Detective Foley pursues a crime ring cleverly hidden inside a chain of amusement parks. Because nothing goes better together than Bugs Bunny and crack cocaine. The third movie was missing some of the original actors, Jerry Bruckheimer was not involved in any way with the movie, and Eddie Murphy deliberately tried to play the straight man role in a franchise literally built on Eddie being funny. Eddie Murphy is incapable of playing in a dramatic role, it’s not in his nature. And that’s fine. Plenty of actors are incapable of playing certain roles. For example, Arnold Schwarzeneggar is incapable of playing a comedic role. 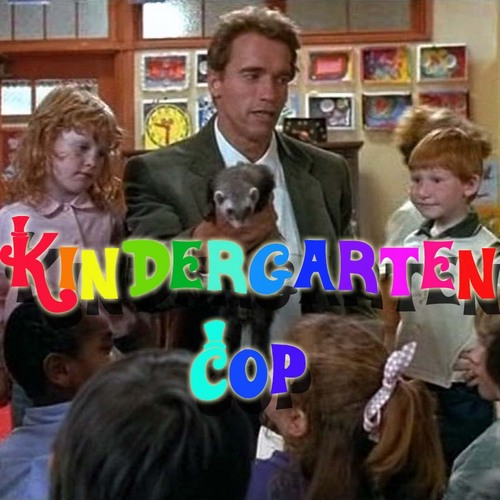 But that didn’t stop them from trying.

The simple fact is that Eddie was depressed because he recently discovered he couldn’t act like Denzel, and was coming off a string of unsuccessful films, and phoned in the performance. The result? Crappy movie. Plus, listen to this song. See if you can go more than 30 seconds without trying to puncture your eardrums with a nail file.

There are many things to make fun of with regards to Mel Gibson; he’s an internet funnyman’s wet dream. But today, we will not pick on him for his crazy racist ways, but rather for his overinsistence on playing the Lone Ranger in post apocalyptic Australia. Yes, ladies and gentlemen, we’re talking about Mad Max. 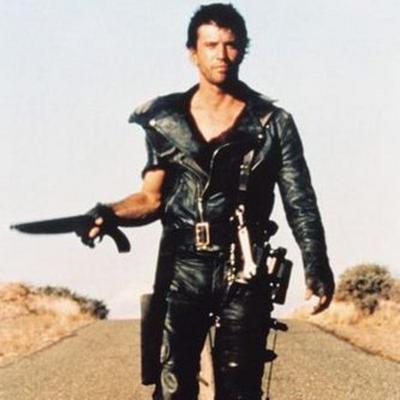 The Mad Max trilogy degenerates as the franchise wound on, becoming more and more crazy as the movies progressed. We get to watch as Max murdered crazy villain after crazy villain, usually by running them over with a truck.

But as far as pure bizarre goes, nothing can compete with the third film in the series, Mad Max: Beyond Thunderdome. It is clear that Mel is reaching from the beginning, when he is shown at the helm of a Conestoga Wagon with all terrain tires driven by camels, and is then promptly attacked by a dive bomber who knocks him off his perch and steals his stuff. He is then confronted by Bartertown, a wretched hive in the middle of the Outback that’s the only civilization for miles around. The place is run by a methane plant made from pig crap. Why no one thought to harness the power of pig crap before they launched the nukes is a question that will never be answered satisfactorily. Bartertown is run by Tina Turner clad in a fur and leather combo that’s refreshingly original in this world of assless chaps and ballgags. The only thing to survive the Nuclear Holocaust.

After Max somehow botches a bungee jumping chainsaw fight in a cage known as the Thunderdome (much harder than it sounds), he’s sent to the desert wearing a donkey mask, evidently to indicate that he’s been acting like an ass. He’s found by a group of tribal children who live in an oasis made by a wrecked airliner. He then has a rousing adventure with the tribal children, culminating in yet another high speed vehicle chase through the desert featuring more Gay Strippers. 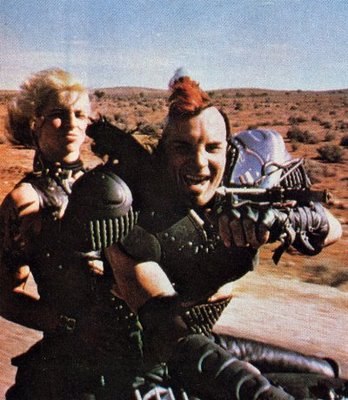 We literally don’t even know which movie this guy’s from. There were men dressed in that exact outfit in all three movies.

How it is even possible to classify this as anything other than a snuff film is mindboggling. It’s like if you went to the Old West and turned everyone gay for each other, this would be the likely result. And there are obvious inconsistencies as well. Look at Football pads up there. No one can find guns or gas, yet this guy has an unlimited supply of fire engine red hair dye. It ends the same way the first two did, looking forward with hope to the future, and Mad Max still roaming the desert looking for one more ass to kick. We get it Mel, you’re a badass. Go prove it in some other manner. 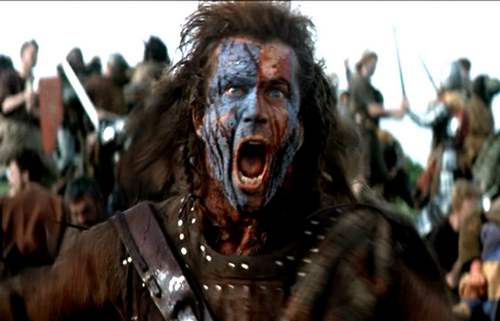 Spiderman has always suffered from not having 2nd rate villains, all the best bad guys being taken by Batman, Superman, and Wonder Woman. By far the best villain Spidey took on was the Green Goblin, his version of Lex Luthor or the Joker. Unfortunately, Spiderman dispatched him in the original movie, leaving Hollywood with a quandary: who should fight Spidey next? They filled that role with Doctor Octopus in Spiderman 2, a man who would have been more at home in a James Bond film. Because, as any Bond fan knows, most of the films contain both nuclear reactors and references to cephalopods.

By the time Spiderman 3 rolled around, they were scraping the bottom of the villain barrel, and thus fielded the Sandman, whose major power was to turn into kitty litter, and Venom, who, when fused with Spiderman, turned him into a gothic douche. And by that we mean that everyone already thought he acted like a douche, but now he was a douche that dressed in black. He also has to contend with his best friend, who straps on some leftover Green Goblin equipment and embarks on a quest for vengeance. Also, Tobey was totally disrespecting the red headed Mary “I’m always helpless in the face of danger” Jane, because he was tired of her BS. This movie just screamed “teen angst” from start to finish. 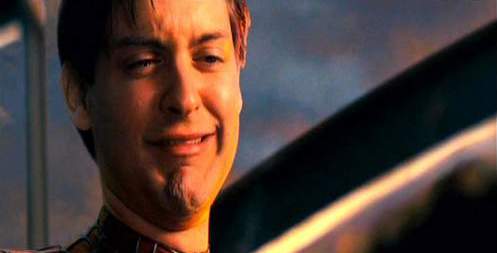 Do you see what I’m talking about?

Spiderman 3 is essentially the wrap up to a real life documentary about Tobey Maguire, in which he transforms from a manchild into a plain old asshat. Thankfully, Hollywood, learning from its mistakes rather quickly, have already made plains to grittily reboot the franchise with a new, and hopefully less emo, Spiderman.

Crocodile Dundee is what people think of when someone says “Australia.” Australians are angered by this stereotype, but as stereotypes go, that one can’t be that bad. Who wouldn’t want to be thought of as a humongous badass with a knife so big it needs its own sheath? 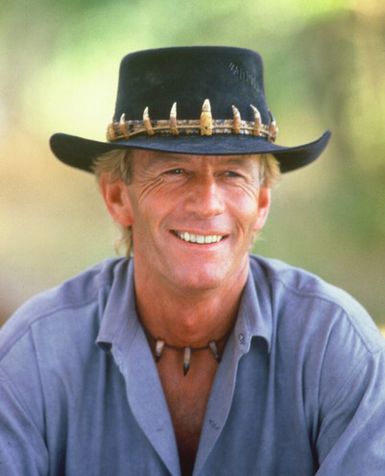 Do you dare mess with him? Because I sure as hell won’t.

The original movie Crocodile Dundee is a movie classic, and the most successful film in Australian cinema. In the sequel what it lacks in comedy and such from the first film it more than makes up for with a good old fashioned Aussie ass kicking at the end. It too was a success. That was in 1988. Ten years pass, and Paul Hogan decides to strap on the knife one more time. The result? A disaster known as Crocodile Dundee in Los Angeles. 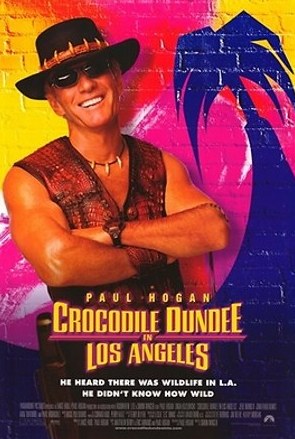 Why are you wearing sunglasses? That hat covers more square footage than an area rug.

In the film, The Dundee family is struggling, seemingly forgetting that Mick owns more real estate than the Catholic Church, and they go to Los Angeles where his wife has a job. Another thing Mick forgets is that he’s a bushman by trade, not Encyclopedia Brown, Super Sleuth. Because this mofo is on the case, riding around the city busting up an illegal art from Yugoslavia theft scheme sort of something or other. Hogan is really out of character, and it doesn’t help that by this point he’s 60 years old, and not as limber as he used to be. 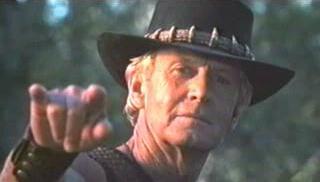 Fans of the first two movies turned out in droves to see the film when it was released in 2001. And all them said in unison when it was over: “What the hell?” Sometimes you just have to recognize that your glory days are behind you, Paul, and yours are over. We’re not saying you can’t still carry the big knife, but showing that much skin at your age is not in good taste.