In 1674, the first auction house was opened in Sweden. It was named Stockholms Auktionsverk. In modern times, thousands of precious antiques and historical artifacts are auctioned off every year. Some of the most popular hobbies in the world include collecting cars, coins, stamps, paintings, sculptures, and a number of other high quality items. The most valuable collectables are famous pieces of art, either paintings or sculptures, but many other items have raised millions of dollars at auction. This article will be documenting 16 of the highest selling items in auction history. It is organized by category and will be exploring fifteen separate types of collectables.

If you live in the United States (and aren’t a total lush) then you remember the government advertising campaign that was launched in 2008 to inform the public about the U.S. digital television transition. On June 12, 2009, all full power TV stations in the U.S. ceased analog broadcasting. Before the change, the analog TV broadcasting spectrum was the accepted method used for transmitting television signals for free over-the-air TV programming. On January 24, 2008, the U.S. Federal Communications Commission (FCC) opened an auction and accepted bids on a United States 700 MHz FCC wireless spectrum. It was officially known as Auction 73.

The event sparked major controversy between some of the largest telecommunication companies in the world, including Verizon Wireless, AT&T, and Google Inc. The 700 MHz spectrum that was being sold was previously used for analog television broadcasting, specifically UHF channels 52 through 69. After the change to digital television was announced, the FCC ruled that these TV frequencies were no longer necessary for broadcasters. The auction divided the UHF spectrum into 5 blocks. The most highly publicized block was the open access C-Block, which was sold to Verizon for $4.74 billion. In all, Auction 73 raised an astounding $19.59 billion. 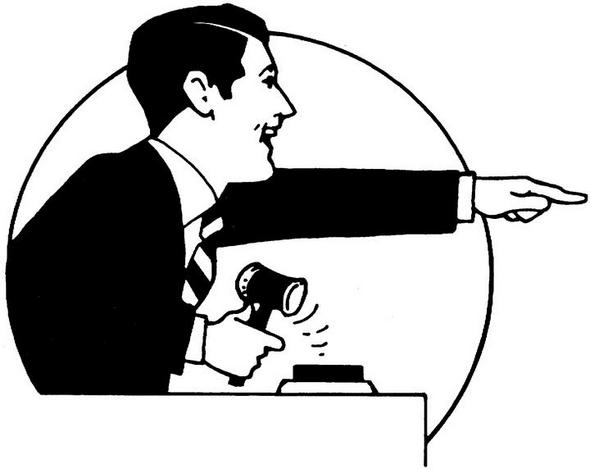 Jackson Pollock was an influential American painter and major figure in the abstract expressionist movement of art. He had a volatile personality and struggled with alcoholism during his lifetime. In 1956, Jackson Pollock died in a single-vehicle car crash. He was only 44-years-old. No. 5, 1948 is a famous painting by Jackson Pollock. The portrait was completed on an 8 foot (243.84 cm) by 4 foot (121.92 cm) sheet of fiberboard. It contains a thick amount of brown and yellow paint, forming a nest-like appearance. Jackson Pollock used his signature style of splattered paint when creating the masterpiece. No. 5, 1948 was originally owned by Samuel Irving Newhouse and displayed at the Museum of Modern Art, but in 2006 it was sold.

According to numerous press releases, the painting was sold by David Geffen, founder of Geffen Records, to David Martinez, who is the managing partner of Fintech Advisory Ltd. The sale was reportedly brokered by Sotheby’s auctioneer Tobias Meyer and the painting was purchased for the price of $140 million. This makes Jackson Pollock’s No. 5, 1948 the highest selling painting in auction history. Despite evidence that the artwork was sold for $140 million dollars, David Martinez has released a statement saying that he does not own the painting. No. 5, 1948 will continue to rise in value, as very few Jackson Pollock paintings remain. A different painting by Pollock named Blue Poles is thought to be more valuable then No. 5, 1948. Blue Poles is owned by the National Gallery of Australia in Canberra.

Alberto Giacometti is a famous Swiss sculptor and painter. He was a key member of the Surrealist Movement and created hundreds of pieces of art during his lifetime. His works are featured in museums all over the world and are extremely valuable, especially his sculptures. L’Homme qui marche I (The Walking Man) is the name given to any one of a series of cast bronze sculptures created by Alberto Giacometti in 1961. The sculptures comprise six numbered editions plus four artist proofs. They depict a lone man in mid-stride with his arms hanging at his side. The sculptures are life-sized and measure 183 cm (72 in). The collection has been described as “both a humble image of an ordinary man and a potent symbol of humanity”. L’Homme qui marche has become one of the most iconic images of modern art.

In February of 2010, edition number two of the sculpture was placed for sale at Sotheby’s auction house in London. It was the first time in 20 years that a human sized Giacometti figure of a walking man had been sold at auction. It was initially expected to bring between £12 and £18 million, but only eight minutes after being placed for sale the sculpture was purchased by Lily Safra, widow of the prominent Lebanese banker Edmond Safra for £58 million. After the buyer’s premium, the price reached £65 million (US$103.7 million). This made the second edition of L’Homme qui marche I the highest selling sculpture in history. In fact, it jumped into the Top 10 most valuable items ever sold at a public auction. The previous record holder was the 5,000-year-old Mesopotamian statue named Guennol Lioness, which was sold in 2007 for $57.2 million. 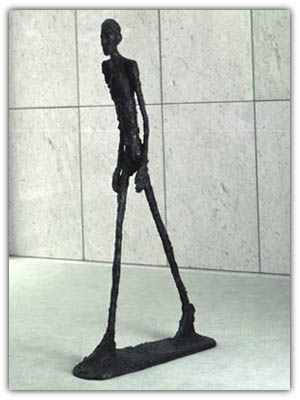 Henry Scudamore, 3rd Duke of Beaufort, lived from 1707 to 1745. At the age of 19, Duke Scudamore commissioned the construction of a chest that would later become known as the Badminton Cabinet. This was the mid-life crises are like when you’re a duke and only live to 38. The Badminton Cabinet consists of an ornate set of drawers. It was developed in Florence and the chest is made of ebony wood inlaid with amethyst quartz, agate, lapis lazuli and many other precious gems. The cabinet is a true masterpiece, as it combines architecture, sculpture and painting with mosaic work and hard precious stones. The chest measures 386 cm high by 232.5 cm wide.

The cabinet derives its name from Badminton House in Gloucestershire, England. In 2004, the Badminton Cabinet was auctioned off for an astounding $35 million. The item was purchased by Hans-Adam II, Prince of Liechtenstein. The sale made the Badminton Cabinet the most valuable piece of furniture in the world. It is quite possibly the most important piece of decorative art to have been commissioned by a British patron in 300 years. The chest is currently on display in the Palais Liechtenstein in Vienna, Austria. 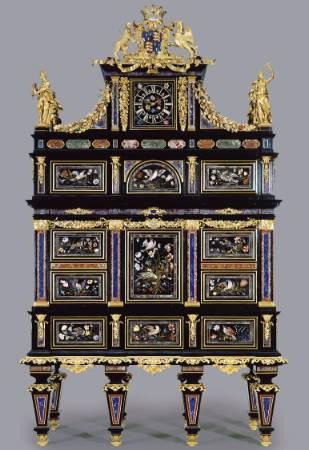 Jean Bugatti is one of the most renowned automotive designers of the early 20th century. In 1934, he developed the first Bugatti Type 57 automobile. The Type 57 was a new design of car and Bugatti would produce 710 different Type 57s between 1934 and 1940, including the famous 1936 Bugatti 57SC Atlantic. The two basic variants of the car were the original type 57 and the lowered Type 57S. Sadly, the production of the Type 57 was stopped after Jean Bugatti died in an automobile accident in 1939. He was only 30-years-old.

The Atlantic body Type 57S is considered by some to be the most beautiful pre-war car. The vehicle features flowing coupe lines with a pronounced dorsal seam running front to back. Jean Bugatti produced only four Type 57S Atlantics during his lifetime and two survive today. One is a 1938 Type 57SC Atlantic, which is currently in the collection of Ralph Lauren. The second is a 1936 Type 57SC Atlantic, which was previously owned by Dr. Peter Williamson. Peter Williamson passed away in 2008 and his Atlantic was auctioned off in May of 2010.

The car set a world record and was sold for between $30 and $40 million. It was purchased by the Mullin Automotive Museum located in Oxnard, California. The previous sales record for an automobile sold at auction was a 1957 Ferrari 250 Testa Rossa, which sold in Maranello, Italy, in May 2009 for $12.2 million. The 1936 Bugatti 57SC Atlantic easily became the most valuable car to change hands at auction. The vehicle has been described as a piece of engine powered art. 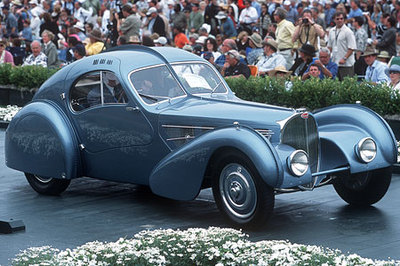 The Codex Leicester is a collection of scientific writings by Leonardo da Vinci. During the life of Leonardo da Vinci, he kept many journals and text books documenting his thoughts and experiences. He prized his journals and most of them were written in a mirror-image cursive. He probably did this in order to keep them secret. The Codex Leicester is the most famous of all Leonardo da Vinci scientific journals. It is named after the English patron Thomas Coke, who purchased the text in 1717. Coke would become the 1st Earl of Leicester during his lifetime. The Codex is quite exquisite and provides a rare insight into the inquiring mind of Leonardo. In the text, he hypothesizes on many topics. Most notably he makes observations and theories on astronomy, the properties of water, rocks, fossils, and celestial light.

The text was written on 18 sheets of paper, each folded in half and scripted on both sides, ultimately forming a complete 72-page document. In 1994, the Codex Leicester was purchased by Bill Gates. He paid $30.8 million for the masterpiece, making the writings the most expensive book ever sold at auction. Bill Gates wants the world to share in the joy of the text, so he puts it on display in a different museum each year. In 2004, the book was exhibited in the Château de Chambord and in 2005 in was on display in Tokyo. In 2007 the Codex Leicester was the centerpiece of a two-month show in Dublin, Ireland. 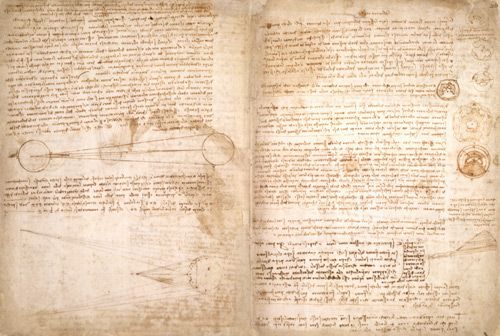 Eileen Gray was an Irish furniture designer and architect. Today, she is highly recognized as a pioneer of the Modern Movement in architecture. During her career, Eileen became known for the innovative Bibendum Chair, which was one of the 20th century’s most recognizable furniture designs. Eileen Gray contained an exclusive customer base and developed some incredible pieces of furniture. She caught the eye of fashion designer Yves Saint Laurent, who helped propel Eileen’s public image.

In fact, Yves Saint Laurent went out of his way to purchase many of her pieces. In 2009, Christie’s auction house in Paris sold the monumental private collection of Yves Saint Laurent and Pierre Bergé. The antiques raised a record-breaking £370 million (US$490 million). One of the items sold was a “Dragons'” armchair created by Eileen Gray. The chair was sold for £21.9 million (US$28 million), setting an auction record for a piece of 20th century decorative art. 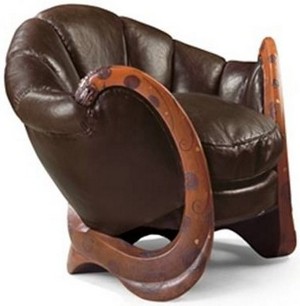 However, in 2010, both diamonds were studied in depth by the Smithsonian Institution and found to be two different stones. The Wittelsbach Diamond originated from the mines of the former Indian kingdom of Golkonda. In 2010, the owner of the diamond, Lawrence Graff, revealed that he had altered the diamond and had it cut by three separate workers in hopes of removing flaws. The Wittelsbach Diamond became four carats lighter (31.06) and was renamed the Wittelsbach-Graff Diamond. This has upset many historians, who are claiming that the recutting has made the famous stone unrecognizable and that its historical integrity has been compromised. 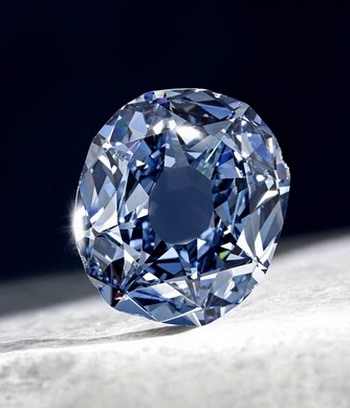