Bloody battle royals, towering giants, steel cages, wicked chair shots, slutty…we mean “sexy” Divas – indeed wrestling has given us a little bit of everything over the years. One integral ingredient has always been the unique theme songs which are played as wrestlers walk, strut or dance down the aisle toward the ring. These musical introductions have ranged from embarrassingly bad to ridiculously awesome. For our purposes we’ll be discussing the awesome sort. Keep in mind; there’s been a billion wrestling themes so we’ll inevitably leave out some that possibly deserved recognition. Should you decide to protest our picks by standing under our office windows please do so… you’ll make excellent target practice. Disclaimer: not all of our water balloons necessarily contain water… most are filled with urine. 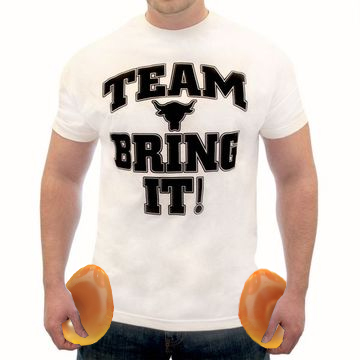 In the history of the sport there’s never been a wrestler more out of his fu**ing mind than Ultimate Warrior. This statement holds even more weight considering we’re talking about a sport where insanity is the norm. Aside from a crap load of muscles, face paint and an abundant supply of crazy, another thing the Warrior had was an entrance theme that could shock the heart of a corpse into pumping again. Seriously, if listening to this doesn’t make you thrash your head around like a lunatic and suddenly get an urge to pile drive anyone within five feet, then you have issues.

The Legion of Doom

Here’s an instrumental that was likely crafted in the 7th level of hell for the sole purpose of inciting extreme violence all across the planet. How can you not dig that voice intro? This metal influenced theme served as the entrance music for the classic WCW/WWE tag team, The Road Warriors, aka Hawk and Animal, aka The Legion of Doom. For many fans they were the greatest tag team of all time (Kanye West might disagree). During their careers they also used the songs “Iron Man” by Black Sabbath and “Hellraiser” by Ozzy Osbourne. One awkward night they were awkwardly forced to enter the ring to Bobby McFerrin’s “Don’t Worry Be Happy”. Unfortunately, an engineer paid for that slip-up with his life.

Departing from the popular rock/metal influenced tunes; WWE also gave us this slick theme for everyone’s favorite “bad guy”, Razor Ramon. Although it’s essentially a loop, it had just enough variety, effects and style to get fans amped for his matches. Now known as Scott Hall, back in the day the “Cuban” Razor Ramon character was modeled after Tony Montana from the movie Scarface. In hindsight, a wise choice considering Tony’s legendary tough-guy status.

Poor Gangrel, he was so far ahead of his time. Nowadays his gothic vampire character would be adored by Twilight crazed teen girls everywhere. Back in the day this sinister instrumental blasted during Gangrel’s entrance… and what an elaborate entrance it was. He appeared on stage rising from a ring of fire while carrying a goblet of blood. What did he do with the blood you ask? Well he would time his walk to the ring on cue with his music. Eventually he’d take a swig and spit the blood into the air just as the music swelled allowing the crowd to fully appreciate the insanity before them. Yeah, they just don’t make them like Gangrel anymore.

You may have noticed that many of the themes we’ve been discussing so far have been from the WWE. Well here’s a memorable theme WCW nailed. Anyone remotely familiar with the nWo super group can vouch for the team’s undeniable awesomeness. This unique theme, “Rockhouse” by Frank Shelly was a large part of the group’s rebellious appeal. This song is appropriate to play after any epic accomplishment you will ever achieve in your entire lifetime. And when we say “epic” we don’t just mean stuff like finding all of the treasures in Red Dead Redemption without the aid of a youtube video.

Thank God for John Cena. If it weren’t for him you might think this article was written sometime at the end of the 90’s. Wrestling superstar, Hollywood actor/action hero, rapper… John Cena has a decent bag of tricks and he uses them all to his advantage. His hip-hop theme (My Time is Now) is catchy and very distinctive. As you’ll note, he’s no joke on the mic and has a confident flow and a strong presence. We’re guessing that those in the “Cena Sucks” camp will hate this entry with a passion.

Younger readers may be surprised to learn that back when The Undertaker first debuted in 1990, kids were not cheering and in awe of his presence. They were creeped out and scared s***less. His “Graveyard Symphony” and elaborate entrance has always been a significant piece of his dark persona. The version of his theme which we’ve posted here is a slightly updated version of his classic theme. The Undertaker and his music have evolved throughout the years. For a while he was even a “bad-ass” motorcycling redneck of sorts but we’d rather not think about that odd phase.

Talk about a song with lasting appeal. “Sexy Boy” as performed by Shawn Michaels is interesting in that it’s a bit of a throwback to the old “WWF” and Shawn Michaels original “boy toy” heel persona. However Shawn stuck with the popular theme all the way up until he retired as a noticeably more mature man (a man toy?). The theme was originally sung by the late Sherri Martel, but Shawn later perfected it as only he could.

As a bonus we’re going to throw in the DX song as well which was cool in its own right. Shawn used this intro while teaming with Triple H and during his run as a DX member.

Speaking of wrestlers performing their own music, Million Dollar Man did just that quite memorably. This infamous song which features his villainous cackling and creepy adlibs personified greed and ambition. We’d like to think that a while back when CEO’s were showing up in limousines and private jets to request bailout money – this was their theme music.

Mega popular WWE wrestler, The Rock had several themes during his time with the company. We chose this particular version as our favorite. We just can’t get enough of those repetitive Rock adlibs and quips. Anyone willing to count how many time he says “the Rock says…” wins the honor of being able to declare that you know how many times Rock says, “the Rock says” in his theme song. Your friends and family will be proud. Or they’ll disown you… whatever.

For our next entry we’re taking it way back. Old-school WCW fans will immediately recognize this atmospheric rock theme as that of the Four Horsemen. The Horsemen were a notorious wrestling stable which originally featured Ric Flair, Arn Anderson, Ole Anderson and Tully Blanchard. Kids today will recognize exactly one of those names (Flair) as the elderly crazy man who bleeds a lot on TNA wrestling.

If that glass cracking sound hit and you were Steve Austin’s opponent then you likely s*** your trunks because an ass whipping was inevitable. Austin’s theme was a highlight of the WWE’s infamous “attitude era”. When this music blasted, arenas exploded in anticipation of the meanest, beer guzzling, middle finger raising, SOB in the history of the sport. Although Stone Cold has been retired for a while don’t let that stop you from loudly playing his theme over and over until a neighbor knocks and says “YOU HAVE TO STOP.” At which point they should find themselves on the receiving end of a Stone Cold Stunner.

You didn’t actually think you’d get through an article like this without us mentioning Hulk Hogan’s iconic “Real American” song did you? Composed by Rick Derringer in 1985, it was one of many tracks featured on “The Wrestling Album”. It was originally intended to be the theme of the tag team The US Express. However, shortly after the album’s release the team left the WWE and Hogan snagged it. The rest is wrestling history. While listening to this song it is MANDATORY that you tear your shirt off. Ladies you too…. Actually, ladies especially.

80’s babies are likely going to love our number one entry. Everyone else will likely just be baffled (which delights us). So, what’s so special about Demolition’s theme song? Well just listen to it people, it lives and breathes a three decade old hardcore type of bad-assery that has been long since forgotten. This hard rock theme was composed by Rick Derringer… yup the same guy behind Hulk Hogan’s theme. Demolition was a classic WWE tag team made up of Ax and Smash. They were three-time tag champs and held the record for the longest tag title reign. Also, they had a noticeable obsession with black leather and spikes, but in the 1980’s that was considered “business casual”.