Children’s cereal is big business. When your customer base thinks artificially colored and sugared cardboard is a gourmet meal, the stuff really should sell itself. Unfortunately, between you and the hyperactive brats there stands parents holding the purse strings and suggesting oatmeal or fruit instead.

Good cereal producers know the key is to utilize the surprising lung capacity and lack of social inhibition characteristic of children by having them throw tantrums in the middle of the crowded cereal aisle. To achieve successful tantrums, they must make the cereal irresistible. Bright colored boxes and loveable characters are the key. Most of the time it works and we grow to love those characters. 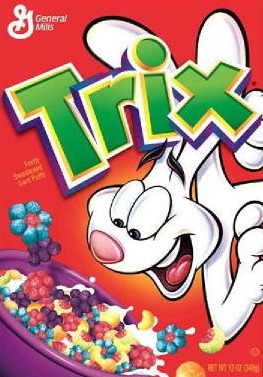 Hang in there, Trix Rabbit, you’ll get the cereal one day

But sometimes the efforts are just plain weird, as these notable standouts show.

Sugared cereals are like crack to little kids, and with Corn Crackos the Post Company wasn’t trying that hard to hide this fact. Sure, they’ll tell you cereal came out in 1967 before crack became an urban epidemic. But when the spokesman is an aggressive crow whose marketing tactics mirror those of drug dealers, you can’t help but wonder.

Watch the bird force his way onto an unsuspecting populace:

The campaign uses time tested drug dealer methodology for trying to get new customers. First you have the free sample. 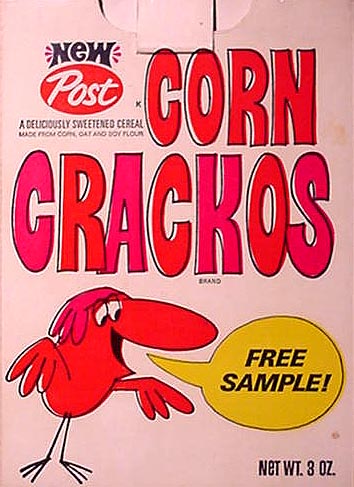 Then the dealer adds a small price. 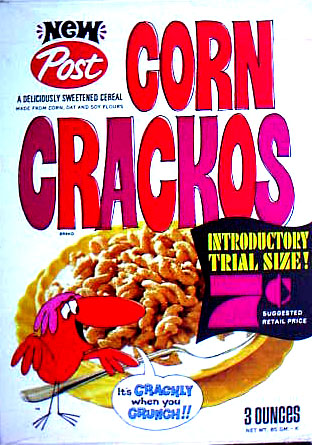 Then, full hooked, he ups the price and invites you to his cracko-fueled concert of psychedelic devil music. 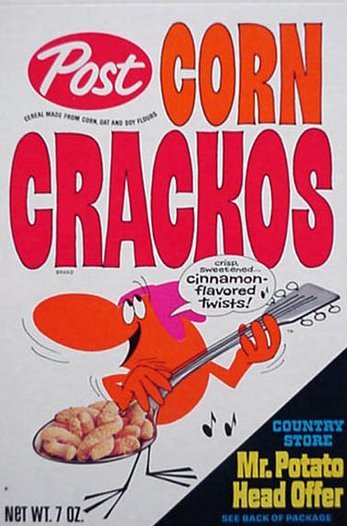 If Post selling crack wasn’t bad enough, they pushed steroids on the unsuspecting populace as well. Mr. Muscle was a sugar-corn cereal. Of course, sugared corn itself doesn’t add muscle. The box tells you to plug into the “Mr. Muscle Power Pack”, which is obviously code for some proprietary anabolic steroid mixture. The “charge” kids get from it must be ‘roid rage. 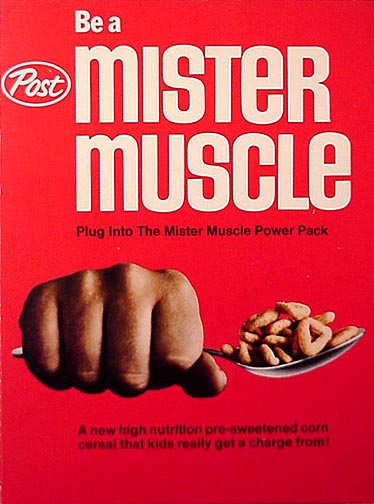 Need more proof? Turn over the box and see the heart monitor reading on the back. Before doping on Mr. Muscle, you have a normal heart rate. After and you’re in heart attack territory. 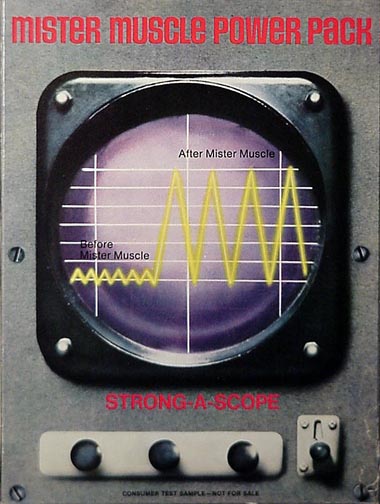 The idea behind So-Hi, the stereotypical mascot for Rice Krinkles, appears to be one part racism, and one part trying to appeal to stoners. Rice Krispies, with the “snap, crackle, pop” could entertain pot smokers for hours. Naming a character So-Hi was probably the best the creative team could come up with. 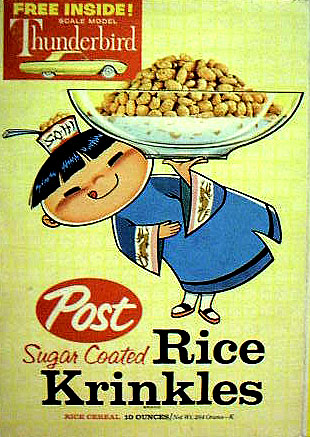 TV advertisements make it more obvious. So-Hi, appealing to many stoner’s love of Eastern philosophy, spouts some pidgin Confucianism encoded with the message “Buy Rice Krinkles”. And you thought Ovaltine was bad.

The Ralston cereal company is evidently made up of a group of unethical mad scientists. The minds behind the cereal “Grins & Smiles & Giggles & Laughs” have created some horrifyingly disfigured machine. It has an ear by its mouth and a bone sticking out of its head! Looking at its face, it obviously has sentience and can feel pain, yet the people around him laugh at his misery. 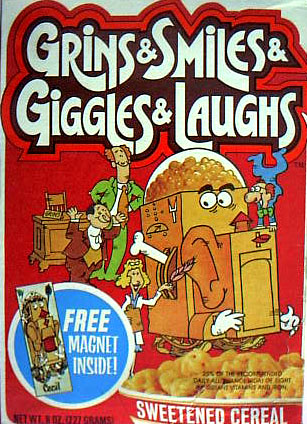 The back of the box shows the machine looking back in fear as it runs away from its tormentors. He probably is seeking the nearest scrap yard to find the sweet relief of death. 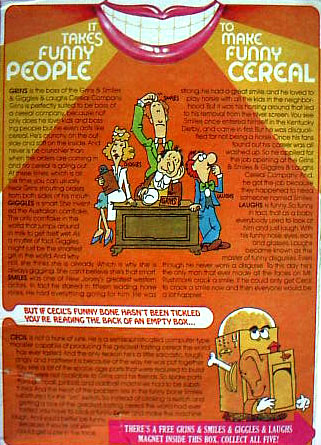 If you thought the furries internet culture was a recent invention, you’re wrong. The Post Company, with its “Crispy Critters”, was pushing anthropomorphic perversity for a while now. Hot twins are cool and if you’re into conjoined twins, well we won’t judge. But seriously, Post cereals, what the hell? 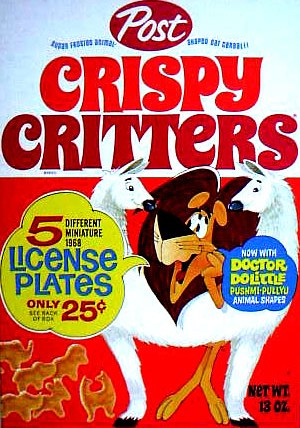 The lion with a heart shaped mane is making eyes at one of the two headed llama? Stick with your own species, lion! We don’t need to see that on our way to pick up our Frosted Flakes!

As kids, we all got the idea to replace the milk on our cereal with orange or apple juice. It was part of a lesson we all had to learn: most creative ideas you have will fail. Someone are Quaker didn’t learn that lesson and thrust Punch Crunch upon us. 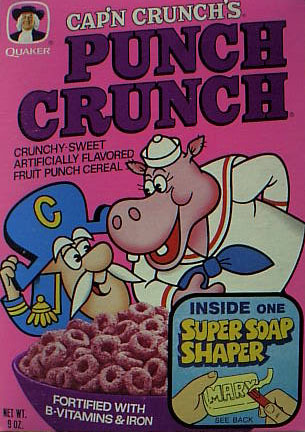 They threw in a soap shaper tool, probably because children would have a newfound appreciation for soap when they used it to wash the taste of the cereal from their mouths. 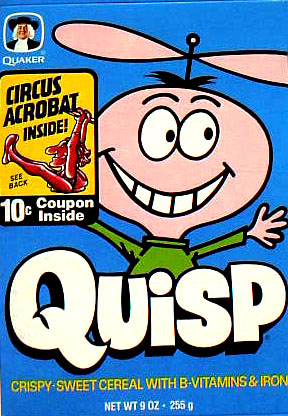 In addition to Quisp there was also Quake, a burly character that apparently played two roles in the local Village People Tribute band: 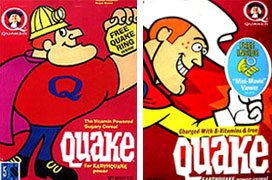 Quake eventually got his cereal dropped and was moved in with “boxmate” Simon the Quangaroo on Quangaroos cereal: 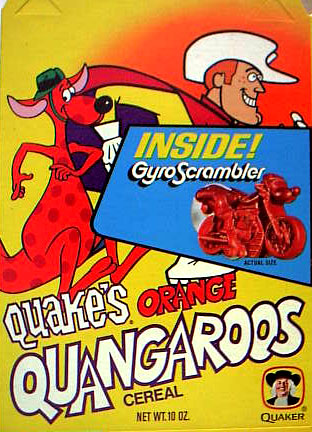 If you had any doubt if Quangaroo was gay, look how he rides a motorcycle 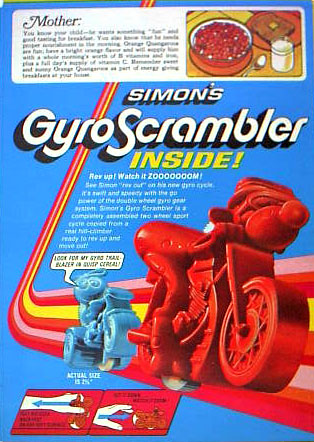 Wait, is that Quisp in the background chasing after Quangaroo? Uh-oh, Quake is going to be jealous. 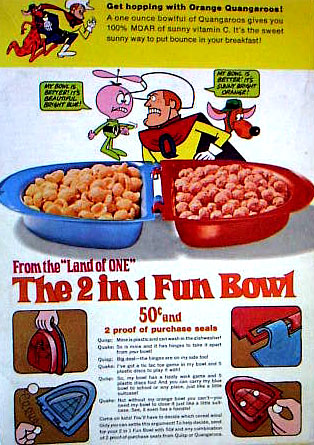 Apparently the downfall in both cereals came upon the fallout from the love triangle. There is only enough room for two in the two-in-one bowls and Quisp and Quake are arguing over which one is better. Things look bad for that home-wrecker Quisp, as Quangaroo seems to favor his cowboy over the space alien.