In our previous article we wrote about some of the weirdest frogs imaginable. For this sequel entry we actually sent a research team into a local swamp for a more authentic examination of the wildlife. However, it’s been a few months and we never heard back from them. We assume they’ve been eaten by something but our lawyers have advised us not to discuss it. In any case, we can always rely on good, old-fashioned web research. So here we are again with twelve more amphibian freaks of nature. Before we start, let’s not forget an obligatory hypnotoad reference…

Okay, now we can begin… 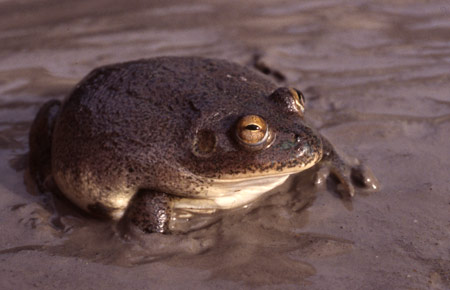 We’ll begin our list this time with the Water-holding frog. Its name derives from its ability to simply hold water (much like “the feces holding monkey” or “the dead mouse holding cat”). This distinctive species dwells in the hot and dry areas of Northern Australia. During rough living conditions such as long drought seasons the frog buries itself three feet under the earth and goes into a deep hibernation. Once it is in a Tylenol PM, coma-like sleep, the frog releases a coat of mucous and cocoons itself inside. This rather putrid activity helps it to maintain water inside its body. The frog may stay underground for two years or more if necessary. When it finally rains, the frog emerges from its grave and immediately seeks braaaaaains…or a mating partner. Whichever comes first. 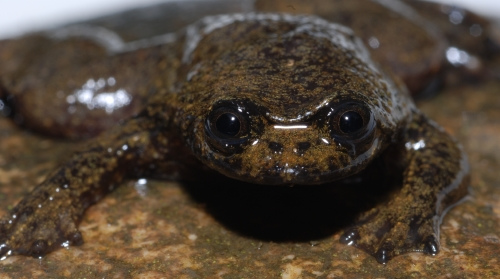 Although it might not look like anything special, the Bornean Flat-Headed Frog is actually a rare species of toad. It’s quite unique in that it has no lungs. It’s as if the frog told Mother Nature to go to f*** herself. This toad doesn’t need any stinking lungs to survive. It breathes entirely through its skin and internal organs. Its stomach, spleen and liver take up the space where its lungs would normally be. Any species that thrives without vital organs is bad-ass in our book. 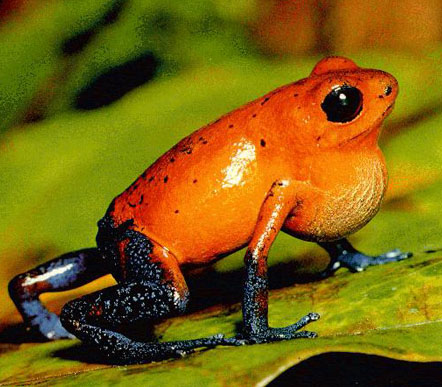 The strawberry poison-dart frog (also known as the Blue Jean Frog) is found along the Atlantic coast of Central America. The frog is famed for its awesome variation in colors. Just like most brightly colored creatures in nature the alluring dart frog contains some rather nasty toxins. The Blue-Jean is nature’s equivalent of a Ben & Jerry’s rainbow ice-cream cone…except its chock full of arsenic instead of calories. 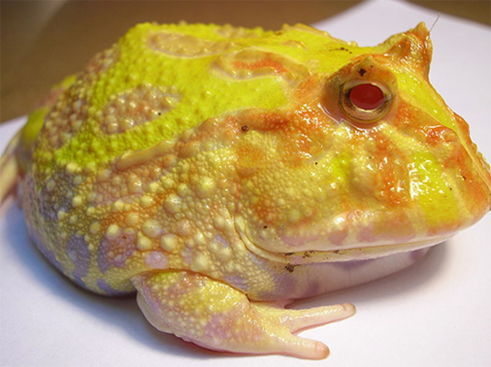 The rotund Albino Pacman Frog is native to the South American rain forests of Brazil. Pacman frogs rely on camouflage to hide from predators; however they could care less about larger animals or humans. In fact, Pacman frogs have been known to attack virtually anything larger than them. That includes hungry predators, nosy scientists and idiot kids with sticks. 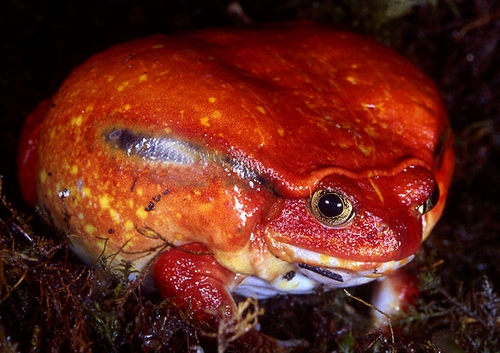 This species of frog tastes awesome on most any sandwiches (easy jokes are easy). Commonly known as Crapaud Rouge, the Tomato frog is any one of three species of genus, “Dyscophus”. The frog is native to Madagascar. Its natural habitats are subtropical or topical lowland forests but it can also be found in swamps, rivers, freshwater marshes, rural gardens and even urban areas (that’s what habitat loss will do for you). When threatened, the frog puffs up its body like a blow-fish or a stupid jock. If a predator can manage to get a Tomato Frog into its mouth, the creature’s skin will secrete a toxic substance that can gum up the predator’s eyes and mouth. A wee bit more impressive than our go-to defensive strategy of soiling ourselves and crying, we have to admit. 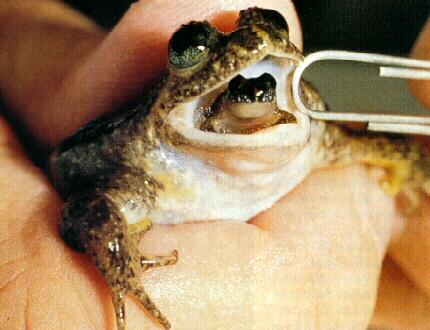 This extinct species dwelled in the rainforest of Queensland, Australia. Although it’s physical appearance was fairly standard, it had a very strange form of parental care as you can see. Following external fertilization by the male, the female would swallow her own eggs so that they could develop safely inside of her. During this period in which offspring were maturing, the frog would simply not eat. After six weeks the froglets would crawl out of their mother’s mouth like something from a B- horror movie. 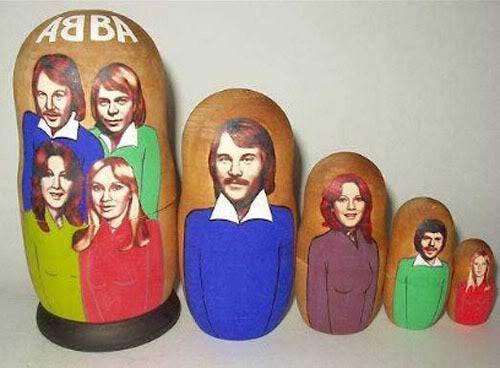 Another way to think of the Gastric-Brooding Frog is that it was similar to an ABBA nesting doll. 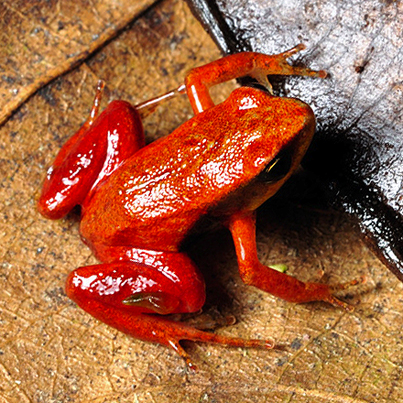 This tiny, garishly colored species is native to Madagascar. Just like their overly colorful frog comrades, the Golden Mantella is also quite poisonous. These frogs do not have a mating season per say, so any time is a good time for a Mantella love-fest. The males mating call is a series of three clicks, repeated endlessly. Just the sort of thing to keep you awake all night cramming sharp objects into your ears. 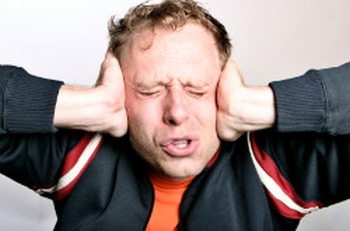 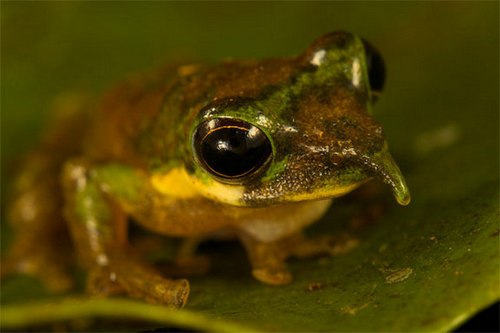 Here’s a frog that gets laughed at by the other frogs when he’s not looking. This tree frog was cursed with a Pinocchio-like spike on its nose. In the male of the species the spike points upward during calling but deflates and points downward when he is less active. We’ll leave that potential dirty joke alone…for now. The frog (which has yet to be officially named) was discovered in 2010 during a wildlife expedition to Indonesia’s remote Foja Mountains. 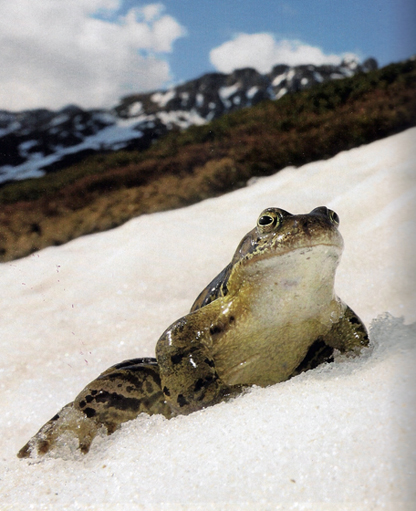 When people think of frog habitats, they likely envision lakes, streams, swamps and Junior High School Biology classes. But one thing we don’t usually picture is frogs hopping around in the snow or swimming through near frozen ponds 6000 feet high in the Alps. That’s just one interesting thing about the Common Frog, which can be found throughout most of Europe and as far north as the Arctic Circle. Another interesting aspect of these icy amphibians is that since they only have a short window for mating they truly go all out to get the job done… 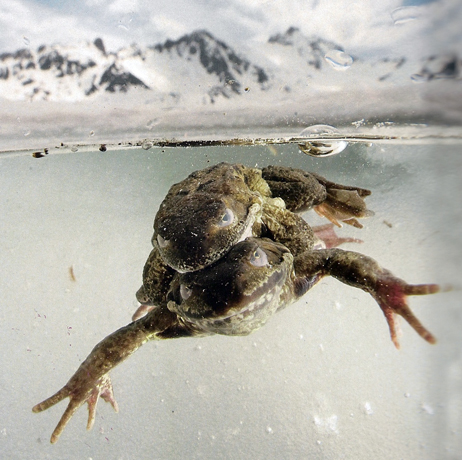 By all out, we mean they literally ride each other for days underwater…mating. 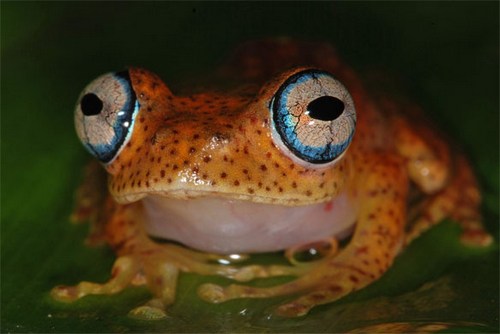 Boophis Pyrrhus is another species of frog which is found in Madagascar. The frog appears on our list for the sole reason of its appearance. It basically looks like a real life version of a frog we’d see in a Ren & Stimpy cartoon.

It’s all in the eyes.

That’s all the reason we need to mention it here. If you have a problem with that feel free to join our missing research team. 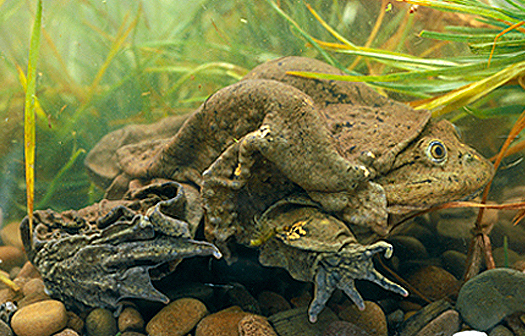 So here we have a frog named Aquatic Scrotum. It’s also known as the Lake Titicaca Frog. Either way, this frog is doomed thanks to its unfortunate luck with names. The frog spends its life underwater and survives in horrid conditions. Lake Titicaca in particular can be brutal for certain types of wildlife. In the case of the Aquatic Scrotum, its substantial skin folds and flaps help its uptake of oxygen from the lake. In other words, it doesn’t look like that because it enjoys it; it looks like that out of necessity. 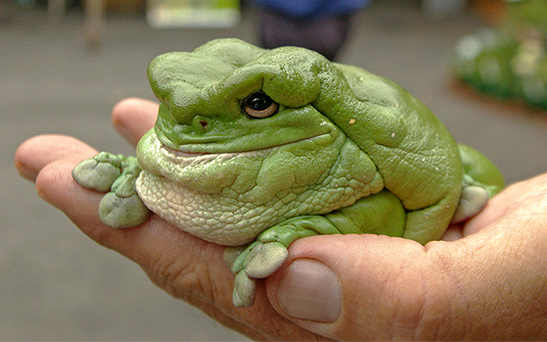 Number one on our list is this Australian tree frog. It goes by many names and can differ significantly in appearance. Naturally we chose the most comically bloated and goofy image we could find as our lead image. The frog is also known as an Australian Green Tree Frog, White’s Tree Frog or White’s Dumpy Tree Frog. The species is larger than most Australian frogs, reaching up to ten centimeters or four inches.

One quick Google search turns up a wide variety of portly pics.

This frog is a popular pet for many people. It tips the scale of weirdness in that it is known to squeak when it’s touched. It can also scream when it’s in danger as a means to scare off predators and foes.

Wait for the “scream”…