Many of us grew up playing a variety of different video games, and that those that didn’t have since accepted their importance in mainstream culture. These games are perhaps some of the most unique and less well-known games ever created…but believe me there is a real reason for that.

Now there is no denying that Michael Jackson has a huge influence on the world of music, and he had some pretty impressive dance moves to boot. But there is also no denying that this game has to be one of the strangest that I have ever heard of. In this game Mr. Big has kidnapped children and taken them to the moon, not only that but he plans to launch a laser that will destroy the earth! Well it is up to Michael Jackson to save the day by performing cool dance moves that shoot out magic rays and destroy enemies. 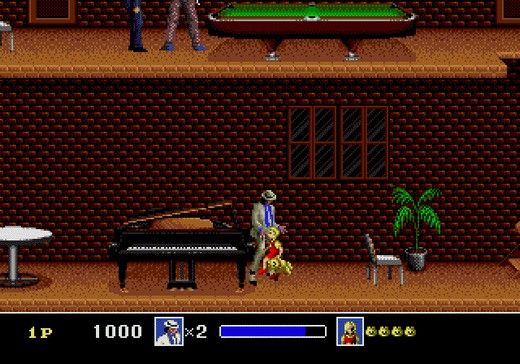 I can’t believe I am even saying this but here is a game that is based off a young boy who goes to the bathroom in the middle of the night and gets sucked into the toilet. The poor kid then finds himself in a world where everyone looks like toilet fixtures and he must make his way to the very end and battle the evil Urinal. Sadly I am not making this up, and what is worst is that there are games out there that are even more bizarre that this one. 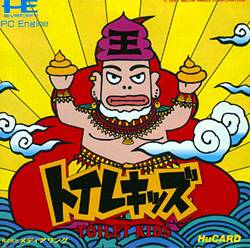 The Typing of the Dead

Now this is a game that really is fun to play and a great way to get boys interested in typing. This was based off House of the Dead and if you’ve ever played it, you will notice that this game is exactly the same, with just a few modifications. Instead of shooting you type your enemies to death, which in an of itself is pretty crazy. But I cannot help but laugh every time I see one of the game’s characters with the keyboard strapped to their chest. But then you laugh even harder when you hear the voice acting. This game is funny, and fun, but mostly just plain strange. 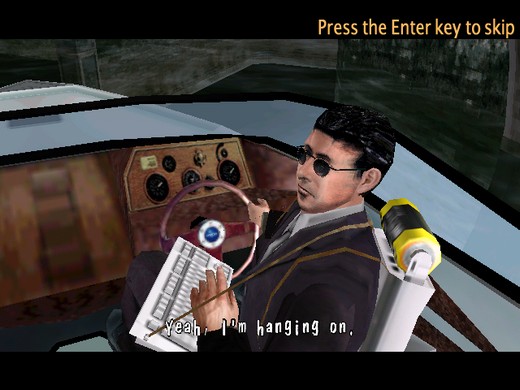 Now it used to be quite common for companies to create interesting marketing campaigns around a specific character. Then it also became somewhat common to develop a video game based on that character. Avoid the Noid was the version created by Domino’s Pizza in which you played a pizza delivery boy, trying to get a pizza to the top floor of a building. The noids are creatures that want your pizza and they will use a number of different methods in order to get it, including trap doors, water balloons and other booby traps. Unique and strange, considering this isn’t exactly common. 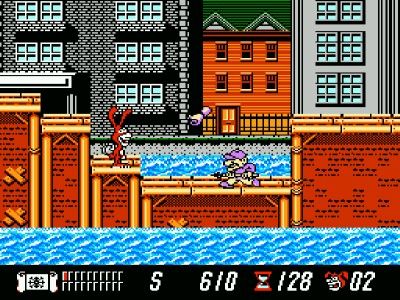 Now most of us hate mosquitoes, really it should be all of us, but I’ve learned not to make assumptions, so I am not sure what the reasoning was behind creating this game. But in this game you play a mosquito that need to extract blood from a family. You do this by hovering near them and waiting for a spot on their body to flash red, and then you swoop in and start sucking blood. If are not careful then the human will notice you and you will have to bump certain parts of their body in order to get them to calm down. None of it makes sense but then again the game probably isn’t supposed to, and for most guys the best part comes when you get to suck blood from the teenage daughter – while she’s taking a bath. 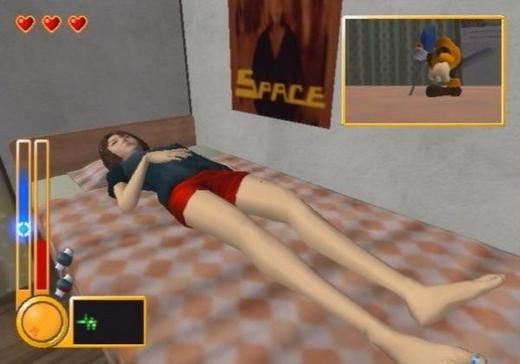 This game is the modern version of advertising coming to video games. Now Burger King came out with three different games but this one is by far the most bizarre. You get to play the King and your job is to take over the King’s task of sneaking up on people and delivering delicious burgers. Now I don’t know about you but the idea of the Burger King popping up beside me, sounds a little creepy, yummy but creepy. In this game you have a number of different tools at your disposal but if you can get through the whole game without laughing every time the King start sneaking around on this tip toes, well then you are stronger than me. 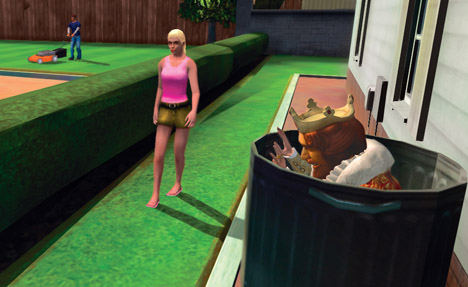 Now at first though this game sounds cool, why? Because it combines zombies and samurai, that’s why. But once you see the pictures you start to realize that something is a little off here. To play the game you control a severed flying samurai head (not what you were expecting right?) and then you shoot at the zombies through your eyeballs. Now you can upgrade your firepower by rescuing the hostages that jump out of buildings to get away from the zombies, just don’t ask me where they get to ride on the head because I really don’t want to know. 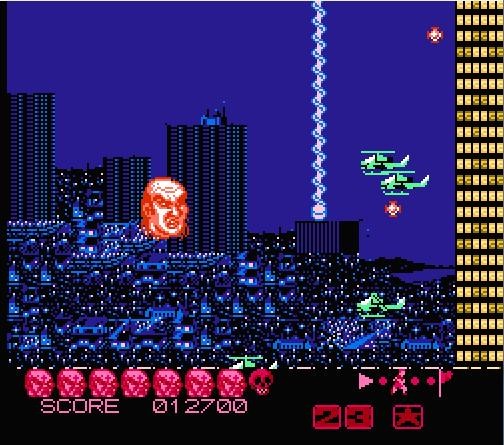 Now Katamari Damacy has become a very popular game and has been released on a number of different platforms, but if you really start to think about the game, you’ll find it pretty weird. The premise of the game is that you are the prince and your father is the King of the Cosmos. Well he screws up one day and destroys the universe, so now it is up to you to fix everything that he screwed up. You do this by rolling up objects and creating large balls. These balls are then brought up to the King who turns them into planets. The characters look weird, the game play is unique and every time the King talks you really start to wonder just what sort of drugs he is on. All in all perhaps the most entertaining game on this list. 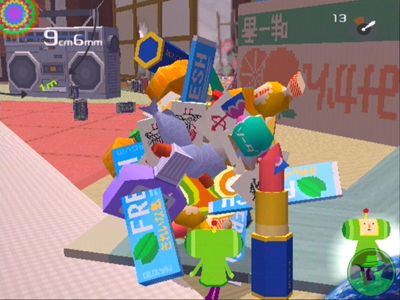 Alright this game just barely takes second place on this list, and that is really saying a lot. I had to debate for awhile whether or not it deserved the top spot. In this arcade game you approach a denim covered butt, yes that is the controller. Then you get to choose between a number of different characters such as ex-boyfriend, an ex-girlfriend, a mother-in-law, a gold digger, a child molester and more. Then you get a paddle to hit the demin butt as hard as you can in order to incite pain in your chosen victim. Once you finish the game a card is dispensed telling the sexual preferences of the character and sometimes prizes are even awarded. 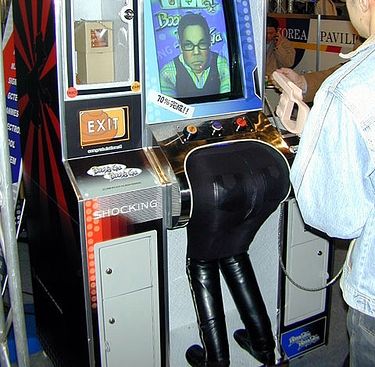 Here is the undisputed ruler of the weird games genre. If a game based on peeing into a urinal was not enough for you. If the fact that you get extra points for peeing on animals was not enough for you. Then just take a look at the Wii controller harness that comes with this game. Yes you actually put on a harness that straps the Wii controller to your genital region so that you can practice your peeing skills. According to the text on the box “Super Pii Pii Brothers promotes good bathroom skills and allows women to experience for the first time the pleasure of urinating while standing.” Yeah that what every woman dreams of experiencing. 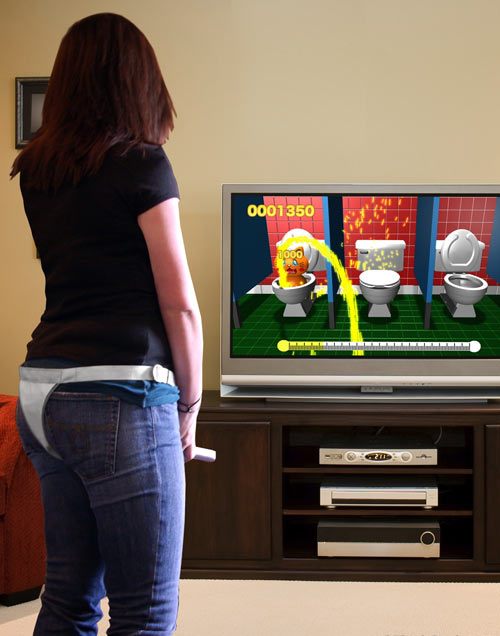 Video games have always been meant to be a source of entertainment and sometimes a new type of learning tool. But these games, while some of them are truly entertaining, they stretch the bounds of our imagination more than many would have thought possible. If you feel daring give these games a try and see if you agree that they are some of the weirdest and most unique games out there.