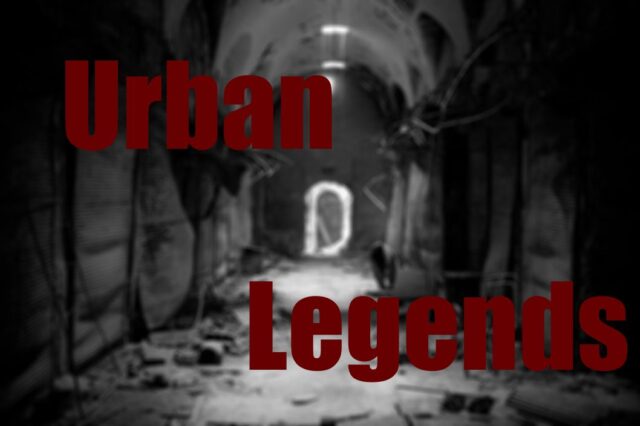 It’s always fun to talk about myths and legends. In a lot of cases, they’re simply more fun than reality. Of course now and then a fake story will get passed around as fact despite all evidence pointing to the contrary. Most of these stories are easy enough to debunk, but now and then you run into some that seem just plausible enough to be real.

10There Are Gators in the New York Sewers

For years and even decades, there have been rumors saying that in the sewers running beneath New York City, there are alligators swarming all over the place, just waiting for some unfortunate soul to wander down and become a late-night snack.

This comes from the ridiculous idea that people were frequently buying baby alligators only to basically flush them down the toilet, which allowed them to survive and grow to adulthood in the muck beneath the city. Obviously, this is completely false. There are no gators beneath NYC. Now, C.H.U.D.’s, on the other hand…

9Walt Disney is a Cryogenically Frozen

Walt Disney is arguably the most powerful person in show business history. In fact, if you take into account how far-reaching his empire has become, with acquisitions of, among other things, television stations like ABC and ESPN, it’s almost impossible not to encounter at least one thing that’s Disney owned on a day to day basis.

A longtime urban legend is that when Disney passed away, he had his body cryogenically frozen, kind of like in the movie Demolition Man. However, it’s not at all true, so if Simon Phoenix ever terrorizes San Angeles we won’t be able to turn to Uncle Walt to kick his ass for us.

8Mr. Rogers was a Navy SEAL

Let’s be honest here, Fred Rogers was one incredibly awesome dude for so very many reasons. One reason a lot of people try to perpetuate his awesomeness is by spreading the story that he was actually a Navy SEAL, or possibly a Marine Scout Sniper. Well, the fact that people are trying to say he was both of those things should probably tip you off to the fact that he wasn’t either.

In fact, he never served in the military in any capacity despite so many rumors to the contrary. That’s probably a bad thing for mankind, however, because if anyone could convince both sides to lay down their arms, it’s Mr. Rogers.

One of the most famous urban legends, which is one of the most terrifying because it’s just plausible enough to be true, is that tourists are always finding themselves getting drugged and left in a bathtub filled with ice, their organs – in particular, their kidneys – having been harvested to be sold on the black market.

This urban legend really found its footing in the 1990s, with it really spreading in New Orleans beginning in 1997, though that obviously isn’t where the myth started. And not a single bit of it is even remotely true, largely due to the fact that in many of the supposed cases, both kidneys are taken, which would obviously kill the victim.

6Santa Claus was Invented by Coke

For various reasons, Coke has always been linked to Christmas imagery, thanks to a series of strong advertisements that included Santa Claus.

In fact, the Coke version of Santa has become so ingrained in people’s minds that it’s gotten to the point where people actually convinced that the modern version of Santa that we all know and love (as long as he hooks us up with some awesome swag) was in fact created by Coke’s marketing team.

However, the same jolly, bearded, red velour wearing fat guy we’ve come to associate with Santa had already been around for years before Coke started using that image.

Of all of the urban myths on this list, this is the one the most people would probably admit to believing. Of course, most people don’t know enough about neurology to dispute it, of course, but at the same time, the belief has always been that if you could access more than just 10% of your brain, you could become Professor Charles Xavier or something similar.

That’s probably what’s kept fueling the fire, because who wouldn’t want to have the powers of Professor X? However, there are these medical technologies called PET scans that allow doctors to see the brain activity in a human brain, and it’s abundantly clear that much, much more than just 10% is being used.

4Donald Trump is a Good Samaritan to Helpful Motorists

Donald Trump is a lot of things, most of which we can’t print for fear of being sued for libel. At the end of the day, however, most sensible people can agree he’s an egotistical blowhard, and most decidedly not the Good Samaritan one famous urban myth suggests.

The myth says that a stranger stopped to help a man change a tire on a limo, and a week later learned the passenger was Trump, who had been so moved that he paid off the man’s mortgage. However, it turns out this is basically a bunch of bull and was actually put out by Trump’s people to try to bolster his image. He actually continues to perpetuate it, and did so on an early season of The Apprentice. The fact remains, however, that it simply never happened.

3Paul Mccartney Died And Was Replaced With a Lookalike

One of the most ludicrous celebrity urban legends is the idea that back in 1966, Paul McCartney was killed in a horrible car wreck, and rather than allowing it to disrupt the recording of Sgt. Pepper’s Lonely Hearts Club Band, the rest of the Beatles just decided to replace one of the most recognizable stars in the world with a lookalike and hoped no one would notice.

This led to the legend about being able to hear “Paul is dead” on one record, but at the end of the day, it’s all completely false. The car wreck in question never took place, but it still got to the point where Paul and his family actually had to appear on the cover of Life Magazine to confirm he was still alive.

One of the strangest animal facts that people like to throw out in conversation, assuming people actually engage in conversation about animal facts, is that a duck’s quack doesn’t echo. Moreover, the urban myth states that scientists cannot explain why exactly that is. But there’s a very good reason why scientists can’t explain why a duck’s quack wouldn’t echo, and that’s the fact that it absolutely does.

Scientific experiments have actually been conducted to debunk this myth, with recordings of different types of duck quacks being used and most decidedly echoing in sealed off reverberation chambers. It apparently just doesn’t echo quite as loudly as the noises some other animals make.

Hey, we’ve gone with some at least reasonable urban legends but haven’t really given you cause for nightmares yet, so how about we end on an exceptionally creepy note? One of the most popular urban legends is the story of a babysitter who phones the parents of the kids she’s watching and asks if it’s okay to cover the creepy clown statue in the corner.

The parents tell her to grab the kids and get out, later stating they don’t actually have a clown statue, and that their kids had complained about a creepy little clown staring at them in their rooms. They hadn’t believed their young kids, writing it off to a boogeyman sort of thing, but hearing it coming from a relative stranger convinced them.

The story continues that the clown was apprehended and turned out to be a dwarf in a clown costume who kept breaking into the house to watch the children.

As creepy as it is, however, it’s no more real than the tale of the hook man, or the whole “the call came from inside the house” myth, or even Bloody Mary. It’s the kind of story that’s good to tell around a campfire, but that’s about all.