This is a guest post from the guys over at iGadget Life. If you are looking for the product reviews, such as lcd tvs or digital cameras, make sure to check them out.

When Apple released the iPad, it was declared as many things, including a game changer. But once we held an iPad, with its thin frame, wide screen, and smooth exterior, we realized exactly how much of a game changer it really was. Gone were the keyboard, the mouse, and the bulk. In its place was a device that was literally all hands on.

Such a device lends itself to so many uses, and so we have a few that you may not have expected. In fact, there are so many great uses that we have spent an exhaustive few minutes digging through the selections and whittling it down to the ten best. With that in mind, we present our top ten unexpected uses for an iPad. 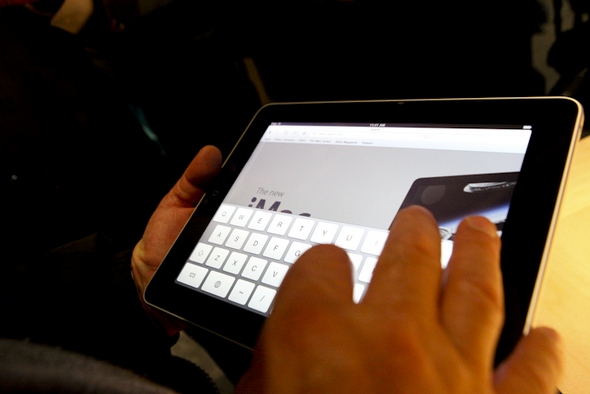 At number ten we have something that is sure to appeal to everyone who likes NERF things. The iPad, with its big display, makes a perfect target for NERF Guns. All it really takes is drawing a target on the screen and going at it. You can even get really creative, and draw different targets on the screen with varying points assigned to each. Challenge your friends to a competition, and see who wins.

If you want to up your NERF game from there, then load up the iPad with a home movie. The object of the game is to shoot your mother-in-law when she comes on the screen. Points are awarded for a direct hit, but a bad shot will cost you. This takes the game from one requiring good aim to one requiring a good eye and timing as well. Please note – you can substitute the preferred target to anyone in the video that you see fit – it’ss a great way to work off stress in a variety of situations.

The iPad is great for kids to play with, but it can also be something great for kids to play on. Take out your favorite drawing app and draw a road around the iPad wide enough for a Hot Wheel type car to fit. Add in a house, a store, a playground, a school, etc. – soon you will have a fun little virtual city for the kids in your life to drive around with their favorite small cars and have fun on.

If you want to make the iPad game more interesting for older kids, you can add a train track to the screen with a railroad crossing, a hospital, and a spooky graveyard. The idea is to cross the tracks before an imaginary train runs you over, otherwise you have to drive to the hospital. If you play it too many times, then you have to drive to the graveyard and the game is over.

For the adult version, draw a circular track with your favorite drawing app with the following labeled buildings: work, home, bar,casino, racetrack, liquor store, brothel, and Apple AppStore. In this fun and educational game, you drive your small car around the iPad track, picking up a paycheck each time you pass work. The goal is to get around the track without blowing your paycheck. Please note that we left out the bank out of convenience – in test plays we found that item to be unused.

So, you like the look of a fish aquarium, but you really don’t like the mess. Well, let the iPad solve that problem for you. Simply find one of those fish aquarium videos on the web, and download it to your iPad. Now, when you want a little getaway, pull out the iPad and launch the video – instant aquarium.

You can hold your virtual aquarium in your hands for enjoyment, or you can lean it against the wall or work computer for extended periods of joy. You can even prop it up on a pillow at night time to be gently lulled to sleep by your precious little virtual fish. (Although for this use I would recommend previewing the aquarium footage first, just in case a shark or lobster makes an appearance and wrecks what would have been a gentle drift off to sleep).

We all love our pets, but sometimes they do need to be entertained. The game changing iPad will come in handy for this as well. The easiest way to entertain a cat is to use the virtual aquarium from above. Nothing delights a cat more than virtual fish lazily floating by for their entertainment. The cat will love to watch the iPad video, and will even swat at the fish and try to catch them, making it a great way to tucker out that precocious feline.

Let’s say that you have both a new iPad and a new baby, when suddenly your significant other informs you that you need to buy that adorable baby a new pair of shoes. This is easy, just place the infant’s foot close to the screen and draw around it with your drawing tool (your finger). Then take your iPad to the shoe store and compare the life size image to the available shoes for sale. You can easily match up the image and select the perfect size of shoe. This allows you to pick out the perfect shoes at your leisure without having to tend to a fussy baby in the meanwhile. This will also work for older children and small, non-well endowed adults with rather small feet.

The iPad life size shopping tool will also work great for gloves – simply hold the hand close to the surface and trace away. Match it up to the gloves when you get to the store, and you will soon have the perfect glove selected.

The flat, somewhat durable screen of the iPad coupled with its thin design lends itself nicely as a handy serving tray for contained light snack items. You can whisk around the room, offering your guests a delightful hor dourves from its lighted surface. For special events you can have the iPad showing a background with a message, and for that futuristic look have it playing a background video related to the event at hand.

If you’re having a dieting club gathering, then you can have different offerings on the iPad tray with each labeled accordingly with a dynamic screen. Perhaps you can use an entertaining video on the iPad trays which will serve as a deterrent to actually eating the food. This will not only save calories for the person being served, it will also stretch out your entertaining budget.

Number four on our list is an area that has been needing a boost from technology for some time – beer drinking. The iPad, with its large screen and finger input, makes it easy to track how many beers you have consumed. It works is like this – pop open a beer, draw a line with a swipe of the finger. Repeat. You can use tally marks, individual marks, or something really creative.

The good thing to note is that the iPad screen is large enough to easily see when, after a few dozen beers, things around you get fuzzy. Plus, there is no stylus or pen to lose, and no hard to find buttons to contend with. If you can lift the beer to your mouth, then you can probably still drag a finger across the screen. For totaling purposes we suggest asking the barkeep or other person to tally it for you.

The iPad is such a game changing device that it can even serve as your wing man when out bar hopping. Before embarking for the evening, load up the iPad with pictures of women that you find attractive. Now, when you go out to the bars, whip out the iPad after every so many beers. Hold the large screen close to the face, and scan across the bar. In this way you can avoid the dreaded Beer Goggle effect, where women appear more attractive as the night wears on. The pictures on the iPad serve as a standard to which you can hold yourself to, and the large screen allows you to clearly see it when you are otherwise inebriated.

Your iPad bar wingman will be there when you need him, and there is little danger that he is going to get hooked up with someone else, leaving you dangerously on your own.

The way it works is like this – when you have a blind date, tell them that you will be found holding a sign. As you would expect, you would be found holding the iPad with a boldly written sign across its front. But there are actually two prepared worded sign images on the device. The correct one, with her name, and another waiting on the home screen.

When contact is first made, and you like what you see, then simply switch off the iPad and enjoy the date. She may like your inventiveness on the sign, and it could serve to break the ice.

But if you suddenly need a place to hide, then hit the bailout icon. The next image loads, changing the name to something similar but different. There will be no physical sign to hide, and you simply state that you are waiting for another person. When the coast is clear you make your getaway, saved by your wit and your iPad.

The Number one position on our list of unexpected iPad uses gives us a way to enjoy our intimate times with a partner that much better. This is how it works – before the encounter, find a picture, pictures, or video of a person that you are highly attracted to. It is important that you crop the picture to the head, allowing it to display as large as possible in the portrait view of the iPad.

Then, when in the middle of the lovemaking act, take out the iPad with the images(or video) loaded, and place it directly over the face of your partner. You will have to hold the iPad in place with at least one hand, so we suggest using the tried and true missionary position. With the bright and colorful pre-selected images super imposed over the body of your partner it will be easy to let your imagination take over, promising an intense session.

If anything is said, simply remind them that the next time it is their turn. And guys, if she shows up toting pictures of your friend’s head on her iPad, then go with it for the moment (it could still be a great experience) but make a mental note to explore this later.