It’s astonishing what we consider to be art these days. It seems that anybody with a chainsaw, a children’s paint set or a garden shed can make a great work of art. But clearly something else is needed to turn mundane objects into modern art – a warped mind.

German anatomist Dr Gunther von Hagens has become internationally known for his ability to turn real human bodies into statues. He does this through a technique that he invented and which he calls ‘plastination’. The procedure involves injecting liquid plastic solution into the dead body of a volunteer, the solution then hardens preserving the cadavers entirely. Whilst Von Hagens originally intended his plastinated bodies to be used for the study of anatomy only, but over the years his ‘sculptures’ have become increasingly artistic. Most recently a new body slicing technique has been used to create wafer-thin cross-sections of the bodies. Von Hagens’ first exhibition of palatinate bodies was in 1995, in Japan. Two years later he launched the ‘Body Worlds’ exhibition. Subsequent Body Worlds exhibitions have toured the world, attracting over 26 million visitors and sparking outrage from certain religious groups.

From the very start, Von Hagens and his work have been at the center of ethical, spiritual and legal debate. In 2002 he performed an autopsy live on British television despite being warned by Her Majesty’s Inspector of Anatomy that it would be considered a criminal act. Because of the controversial nature of his work he is said to work out of a secret laboratory, the entrance to which is concealed by a movable staircase.

A nominee for the 2009 Turner Prize (for young British Artists), Roger Hiorns is an expert in ‘unusual mediums’. This dust sculpture (or a floor in need of serious vacuuming as some would call it) was created from the atomized remains of a jet engine, although it could just be. The exhibition in London’s Tate Modern art gallery also features sculptures made by fusing cow brains with plastic and metal. 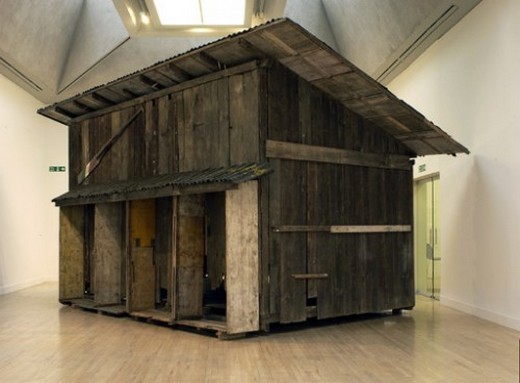 It’s a shed, it’s a boat, it’s a shed-boat-shed. Or is it just a few planks of wood used to make two different things. Simon Starling said that the shed had a pedal on its side when he found it and that this inspired him to turn it into a boat. He then transformed it back into a shed for his installation in Tate Modern. Although this might have seemed like a spectacular waste of time, it actually won Starling the £25,000 Turner Prize back in 2005. On winning the prize he said that he was ‘a very lucky artist’, something to which everybody else agreed. Of course, Starling isn’t the only person capable of using wood to make something, carpenters, for example, are extremely adept at it, as are boat-makers and my dad. 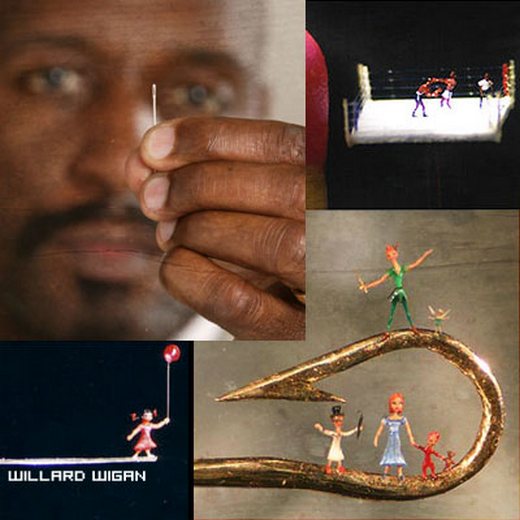 Willard Wigan, a dyslexia sculptor from Birmingham, England is famous for making the smallest sculptures in the world. Most of his sculptures are so small that they have to be mounted on the head of a pin or in the eye of a needle just to keep him from losing them. Wigan has recently created a miniature sculpture of the Obama family, but his most famous work is a replica of Michelangelo’s David, carved from a single grain of sand.

5. The Physical Impossibility of Death in the Mind of Someone Living – Damien Hurst 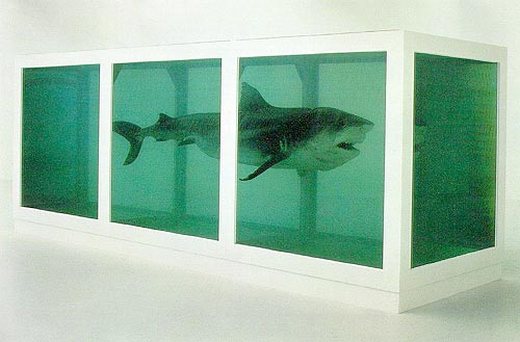 Damien Hurst is one of the most controversial British artists of the last century. Whilst some have been shocked by his dead animals in formaldehyde, the most famous of which is his pickled shark entitled ‘The Physical Impossibility of Death in the Mind of Someone Living’, many British artists find his work bland and unimaginative. Hurst is also criticized for being a ‘commercial’ artist.

Much of his highly-valued artwork is created by a team of apprentices. It could be argued that the pickled shark is impressive simply for being a shark and that making the creative decision to pickle it and put it in a box was as simple and uninspired as framing an existing piece of art. Hurst’s other preserved animals are much less impressive and by no means as memorable. 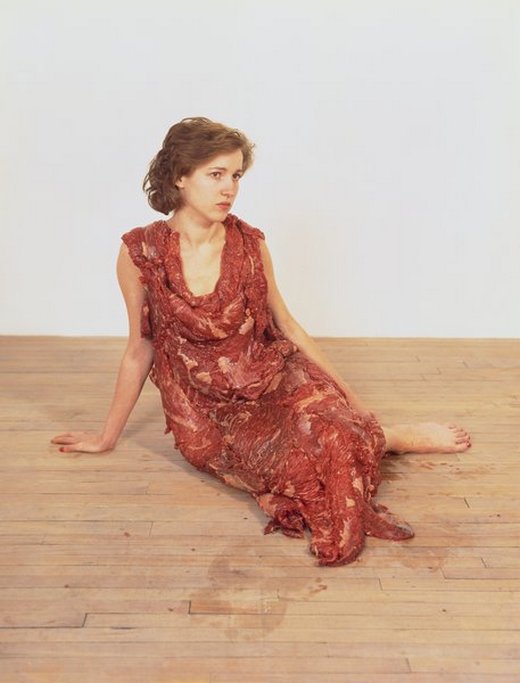 This flesh dress (quite literally a dress made of meat) was created by Montreal artist Jana Sterbak and was displayed in the National Gallery of Canada, causing much controversy. It was said to be a comment on bodily vanity and a reminder that no matter how much try to beautify our bodies we’re all little more than meat hanging from bones.

Canadian Stuckists were outraged that the flesh dress could be considered art and 200 of them were so disgruntled that they mailed scraps of food to the National Gallery in protest of the exhibition. 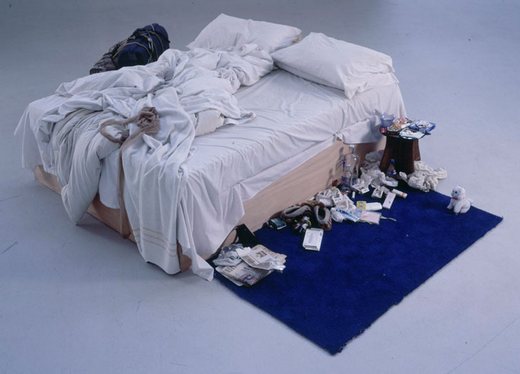 Tracy Emin’s unmade bed has been called one of the most shameful pieces of art in history. Adorned with cigarette buts, empty bottles, stained sheets, and a curious toy dog, this is the aftermath of a nervous breakdown and shows the intimate details of the artists’ private life. Those unlucky enough to have shared Tracy Emin’s bed have also since been immortalized, their names listed on the walls of a tent entitled ‘Everyone I Have Ever Slept With’. There are over 100 ex-lovers listed in the tent. 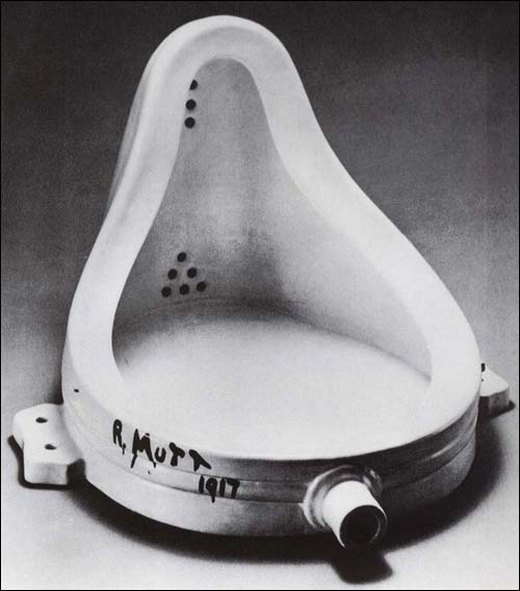 This has to be the most famous urinal in the world. Perhaps intended as more of a statement than a piece of art, this exhibition piece caused controversy in the New York art scene and sparked debate about what can be considered art. Originally ‘created’ in 1917, it was submitted to an open exhibition under the pseudonym R, Mutt. The exhibition had been arranged by the Society of Independent Artists, of which Duchamp was a member. They had previously promised to display any pieces of art that were submitted but decided no to display ‘Fountain’ on the grounds that it was ‘not art’.

Duchamp resigned from his position on the society’s board in protest. When he claimed responsibility for the urinal sculpture the debate over what constitutes art raged. The original piece was lost but Duchamp commissioned a replica in 1960, causing the issue to surface once again. The question of what can be considered art has been one of the most enduring and still sparks debate today. 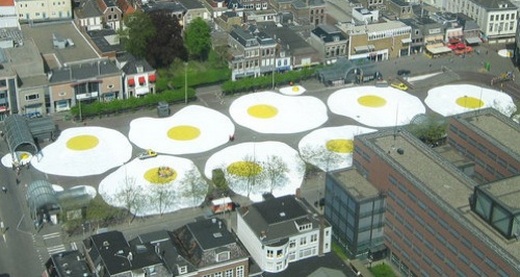 Dutch artist Henk Hofstra is responsible both for this strange piece of public art in Leeuwarden, Netherlands and for the terrible pun by which it is known. Several large eggs (each 100 feet wide) were spread on the Zaailand, one of the largest city squares in the Netherlands for six months during 2008. Whilst nobody seems to understand what Hofstra is trying to say by this installation (perhaps he is making a point about global warming), it certainly is a fun and exciting use for an otherwise empty space. 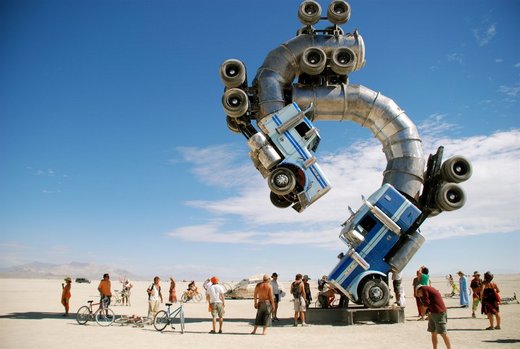 Constructed from two discarded 18 wheel tankers, Big Rig Jig is an observation tower as well as a sculpture. It might look as though it can barely support itself, let alone any extra weight, but it is actually possible to climb inside the sculpture and, with the help of a ladder, right to the very top. The sculpture was commissioned by the organizers of the Burning Man festival in Nevada where it made its debut appearance, but after the festival was over it had to be transported back to its birthplace in Oakland, California where it has resided since then. It is currently looking for a new owner.