When you really get down to brass tacks, sex is a huge deal among humans. The drive for reproduction and its consequences influence virtually every aspect of human interaction in one way or another, and the variety of sexual acts and appetites humans indulge in is dizzying. It should come as no surprise, then, that the animal world is equally complex. What is surprising are the dirty details of what happens when some animals get down to getting busy.

Any time strange animal mating habits are brought up, bonobo monkeys are mentioned. They’re the sex weirdo superstars of the animal mating world, and one might cite them as the free-love ambassadors to the primate kingdom. Bonobos engage in a wide range of sex acts, from vanilla missionary-style sex to oral sex, French kissing, and mutual masturbation. Bonobos are bisexual, and engage in female on female grind sessions as well as slightly hilarious penis-fencing sessions. What’s more, sex is used for far more than reproduction. Conflict resolution is one example. Two fighting bonobos will very often engage in some steamy make-up sex. It also serves as a way to identify with other members of the group, just like a handshake, only kinkier. Sexual stimulation is even used to soothe problematic offspring. 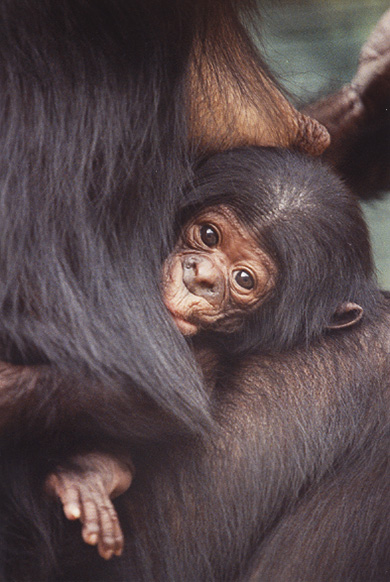 The sexual habits of the praying mantis are popularly misunderstood, though somewhat infamous. The common understanding is that the female eats the male’s head during mating. This is not entirely true, at least not all of the time. For one species, Mantis religiosa, eating the head is required for reproduction to occur properly, and it causes the male’s body to ejaculate more quickly. For the majority of mantis species, cannibalism only occurs approximately 5-31% of the time, and happens for a surprisingly simple reason: the female is hungry. Mantids have an extraordinary appetite (eating up to 16 crickets a day), and reproduction is pointless if the female starves. Furthermore, this happens more often in a laboratory situation, in which the mantis in a foreign, stressful environment and may not be able to eat her fill. The majority of mantis couplings do not end in death, and instead the couple will engage in an elaborate mating dance, complete with stroking each other with their antennae. A fine line to walk for the male! 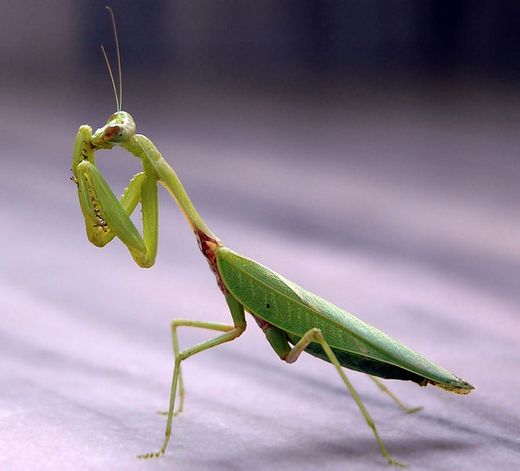 A school of clown fish consists of a breeding pair (one male, one female) and a larger group of non-breeding males. This hierarchy is based completely on size, with the largest fish being the female. This solitary pair represents the future of the group, so if the female dies the entire group is thrown into disarray. To correct the situation, the breeding male will spontaneously switch its gender, becoming a female. It will then choose a male mate from the non-breeding group of fish, and the cycle continues. As such, each clown fish school is essentially made up of one female to preserve the group’s biological longevity, supported by an entire posse of backups. 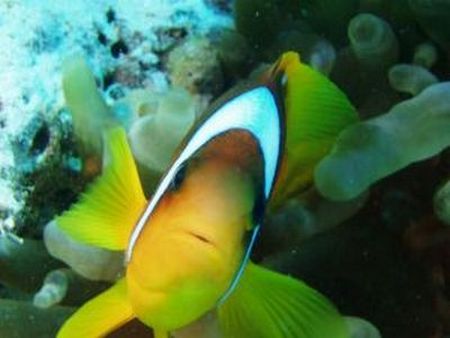 When it’s time for a queen bee to mate, she’ll fly to a site with a myriad of male drones and begin mating with several mid-flight. Male bees, like so many other species, have a natural strategy to try and ensure that their DNA is passed on instead of that of the other males – specifically, their genitals burst and tear off inside of the female, plugging the hole into which they’ve been inserted. The old “exploding penis trick” is usually deadly for the males, and even when they survive they’re tossed out of the hive on their backsides, since their purpose is to mate and little else. Used up and lacking their manhood, they’re about as useful to the hive as yesterday’s news. 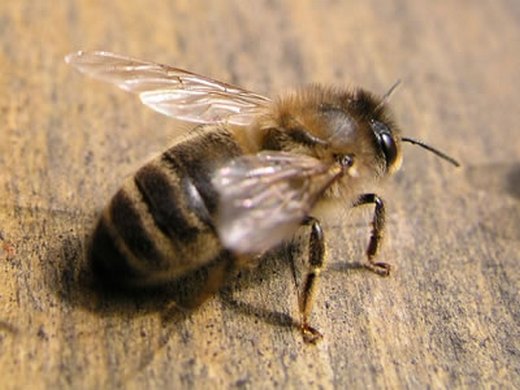 Hippos are not to be underestimated. Though a frequent cute cartoon character and the centerpiece of the popular children’s game “Hungry Hungry Hippos”, the fact of the matter is that hippos are shockingly powerful and extremely dangerous. Mother hippos guarding their young have been known to kill lions or bite crocodiles in half. Male hippos are aggressive and territorial when competing for the attention of females, and one of their tactics is definitely unique: they urinate and spray dung all over themselves and the water in their immediate area, then use their tails to splash, further showering the area in their waste. The smell not only attracts females, but serves to mark the male’s territory. 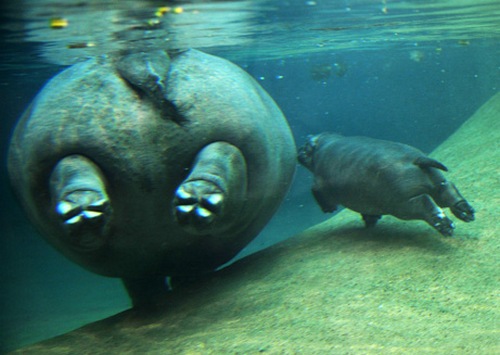 As we’ve discussed, homosexual or bisexual behavior is not uncommon in the animal world, and it’s particularly common among male geese, which will often choose same-sex partners. Though they perform copulation like heterosexual geese, obviously neither party is impregnated. However, sometimes female geese will very slyly slip between the two mating males, getting fertilized and then taking off. When the baby geese are born, the entire trio can be observed taking care of them. 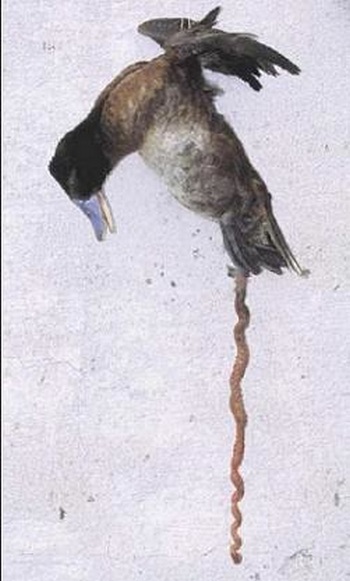 The ways in which spine-covered animals can safely bump uglies is worth investigating all on its own, but the details of porcupine lovemaking are even more interesting than you might imagine. In the days leading up to mating season, both females and males will take on new behavior. Females will begin stimulating themselves by rubbing their genitals against objects (even the wiring of their cages, if in captivity), very similar to human masturbation. Males will also engage in this behavior, and will pay a great deal of attention to places and objects the female has grinded against or places where she’s urinated. This urine fascination is just the tip of the iceberg, though. When the female is ready to mate, she’ll stand up, belly-to-belly against the male. The male will stand up on his hind legs, and in all his manly glory will hose the female down from head to toe with an intensely powerful stream of urine. 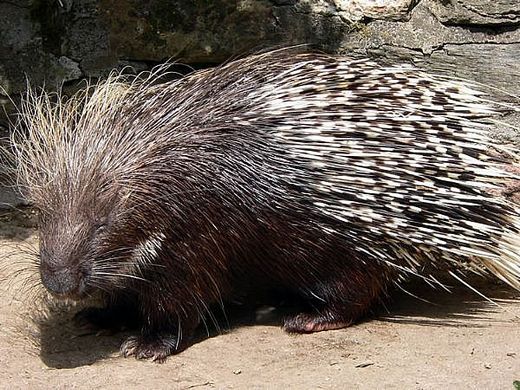 The male Argentine Lake Duck is small, but has one of the most impressive packages in the animal kingdom – a corkscrew-shaped penis that is the longest among vertebrates in relation to its body length. The female’s vagina is a similar corkscrew shape, suitable for receiving the male. What’s more, the tip of the male’s penis (which remains coiled up when flaccid) has small barbs which are used like a brush to wipe away the semen of other male ducks to increase the chances that its own seed gets passed on in the case of multiple matings. And multiple pairings certainly do occur, as these ducks are extremely forceful, regularly trying to force themselves on the females (though rarely successfully). 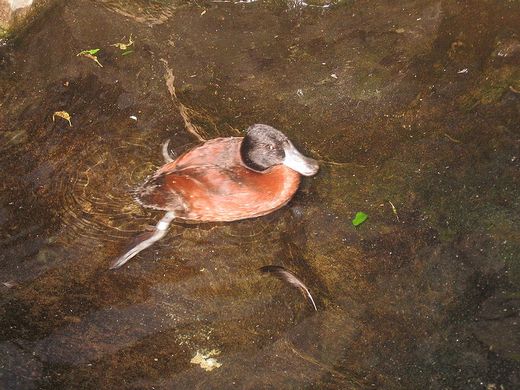 Simply put, the mating rituals of the red-sided garter snake are completely terrifying. Each spring, these snakes will emerge from their hiding places and converge on “mating pits” in massive numbers (often reaching thousands). These pits become a teeming soup of writhing snakes, and when a female enters the ground hundreds of males will wrap around her, forming a “mating ball”, a large clump of snakes all struggling to impregnate the same female simultaneously. In terms of biological practicality, this has two added bonuses. Firstly, it keeps the female’s body temperature high. Secondly, having a protective living shield of other snakes keeps her safe from predators. If you thought it couldn’t get any stranger, buckle up: Occasionally, males will secrete female pheromones, fooling hundreds of other male snakes to wrap them up in a mating ball as well, trying in vain to impregnate the male. The exact reason for this is a mystery. Traditionally, scientists have assumed that this behavior gives the faux-lady snakes an edge in mating, but no evidence suggests this is true. New arguments suggest that they’re cashing in on the aforementioned bonuses – warmth and protection – especially if they can’t compete against the other males for a female mate anyways. Either way, the whole ritual is chilling to anyone with a fear of snakes. One couple in Manitoba, Canada accidentally built their home atop a mating pit, only to find that when spring rolled around their house was overrun with thousands of snakes. 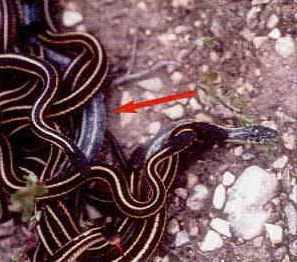 Hyena reproduction is a tricky affair, and the ways in which females cope are truly strange. Unlike many other animals, females are at the top of the hyena’s social hierarchy, and are bigger, stronger, and more aggressive than the males. To give an edge to their offspring, females will give their developing offspring high levels of androgen, a male hormone rather similar to testosterone. This makes the newborn females more competitive when scrapping for food, as well as giving them the highest chance of becoming an alpha-female more likely to find mates. However, this also causes extreme growth of the sexual organs, especially the clitoris, which protrudes seven inches from the female’s body and contains the birth canal. In other words, the female grows something very similar to a penis. And, you guessed it, the male has to find a way to insert his penis into something very much like another penis, positioning themselves behind the female in such a way that their penis points both upwards and backwards. When this is done successfully, the female then has to give birth through the same organ, forcing out a baby hyena through a canal only an inch in diameter. Frequently the clitoris bursts during birth, which is often fatal to the mother. 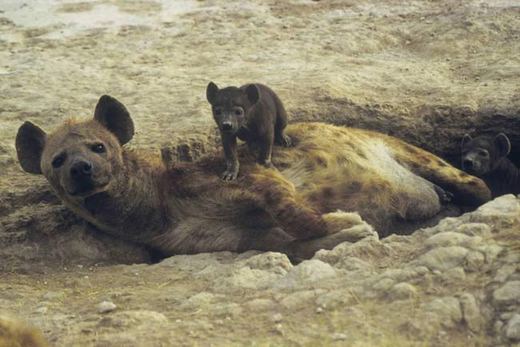